Climate One recently hosted an expert panel at San Francisco’s Commonwealth Club entitled “After El Niño: Now What?,” which featured Almond Board of California Director of Sustainability & Environmental Affairs, Gabriele Ludwig. Ludwig was joined on stage for the two-hour lively discussion by Ashley Boren, Executive Director of Sustainable Conservation; Barton Thompson, Founding Director of the Stanford Law School’s Environmental and Natural Resources Program; and Max Gomberg, Water Conservation and Climate Change Manager at the State Water Resources Control Board. The panel discussed what’s next in terms of best managing California’s water, covering topics including the most cost-effective methods of storing water, advancements in agricultural technology, how the drought impacts at-risk communities, and what Californians can do to reduce their daily water consumption. 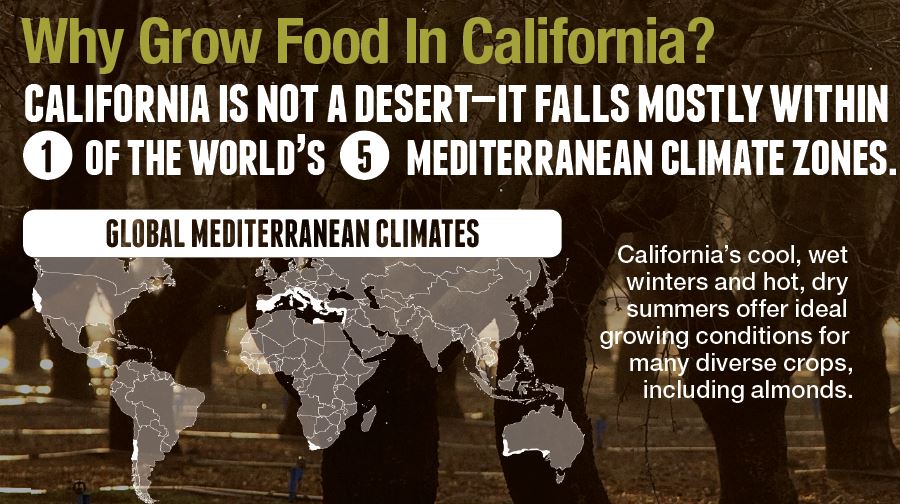 While this year’s El Niño has brought rain and helped fill state reservoirs, California is still in the midst of a historic drought. California almond farmers have always taken the long view with regards to sustainability.1 For decades, growers have adopted innovative production practices that continue to lead to improvements in efficient and sustainable farming.

The panel tackled concerns about the state of California’s groundwater resources, and steps that can be taken to ensure this important resource is sustainably managed and protected for future generations. In 2015, farm water allocations reached historic lows due to the ongoing drought. During the panel, Ludwig noted that lack of surface water supplies meant that “when growers could, they used groundwater.”

As Ludwig noted, given the extended drought’s impact on surface water supplies, the volume of pumped groundwater has been more than can be reasonably recharged without coordinated and managed efforts. That’s why Almond Board of California, Sustainable Conservation, University of California researchers and others launched a partnership last year focused on exploring the potential of California’s one million acres of almond orchards, combined with excess floodwaters that aren’t usually captured and stored, to recharge Central Valley groundwater. This partnership marks the first concerted effort to increase groundwater recharge on farm land used to grow almonds.

However, replenishing groundwater isn’t the only solution to ongoing water supply issues. During the panel, Ludwig noted that “it’s not a question about finding new water; it’s a question about diversifying the water supply.” For instance, almond growers in the Del Puerto Water District have been key collaborators in the North Valley Regional Recycled Water Program, which brings treated wastewater from Central Valley cities to agricultural land where it can irrigate crops.

During the panel’s Q and A, a member of the audience asked questions about the amount of water farmers use to produce California’s crops, and whether the foods produced by those farmers were sustainable and healthy options for American consumers. While all food takes water to grow, it’s important to note that an almond tree needs about the same amount of water as any other fruit and nut tree in California. With regard to almonds, the California Almond community is especially proud to use that water to grow a highly nutritious food that can be grown productively only in a few places in the world – those with Mediterranean climates.2 In closing, Ludwig highlighted the Mediterranean diet, one that is rich in fresh fruit, vegetables, nuts (including almonds!) and olive oil, as a dietary pattern recommended by many health authorities and one with key crops ideally suited to being grown in California’s Mediterranean climate.3

Watch this space and @almonds on Twitter, @californiaalmonds on Instagram, and the Almond Board’s Facebook page for further information on the Mediterranean diet during Mediterranean Diet Month this May.

1 What defines California Almond sustainability? Sustainable almond farming utilizes production practices that are economically viable and are based upon scientific research, common sense and a respect for the environment, neighbors and employees. The result is a plentiful, nutritious, safe food product.