Almond Board Expands Ag in the Classroom Education

Many students, and even adults for that matter, don’t realize that almonds grow on trees. Even more, they’re often unaware that California is an agricultural powerhouse with more than 400 crops grown here. Almond Board of California (ABC) is committed to closing this gap in understanding; specifically educating elementary students, so they can better understand where their food comes from and expand their knowledge of agriculture, the environment and natural resources.

It began in 2009 with “An Almond Story” video and accompanying activity book. Designed to explain how an almond is grown, the history of the almond industry and the many uses of almonds, these pieces work together via kid-friendly storytelling from one of the video’s main characters, Auntie Bee. This year, ABC rounded out the “An Almond Story” educational experience with the addition of classroom lesson plans.

The idea for the lesson plans came from ABC’s Almond Leadership Program, a yearlong program during which participants learn about the almond industry through attendance at monthly seminars. Throughout the year, each participant works on a capstone project that they present in the final month of the program.

Two participants of the 2013 Almond Leadership Program identified a need for lesson plans to complement ABCs existing educational materials. They conducted research, spoke with educators and used content from the video and activity book to create six different lesson plans, including Fact or Opinion (a lesson on language arts) and Fun with Almond Math (a lesson on mathematics).

The team’s research and suggested courses served as the foundation for the formal lessons that were passed on to California Foundation for Agriculture in the Classroom (CFAIC). In partnership with CFAIC, the lesson plans, “California Almonds: An Almond Story,” were aligned with education standards for California schools, along with national Common Core standards for math, science and English.

They were built with grades three to five in mind, and include five lessons, titled: 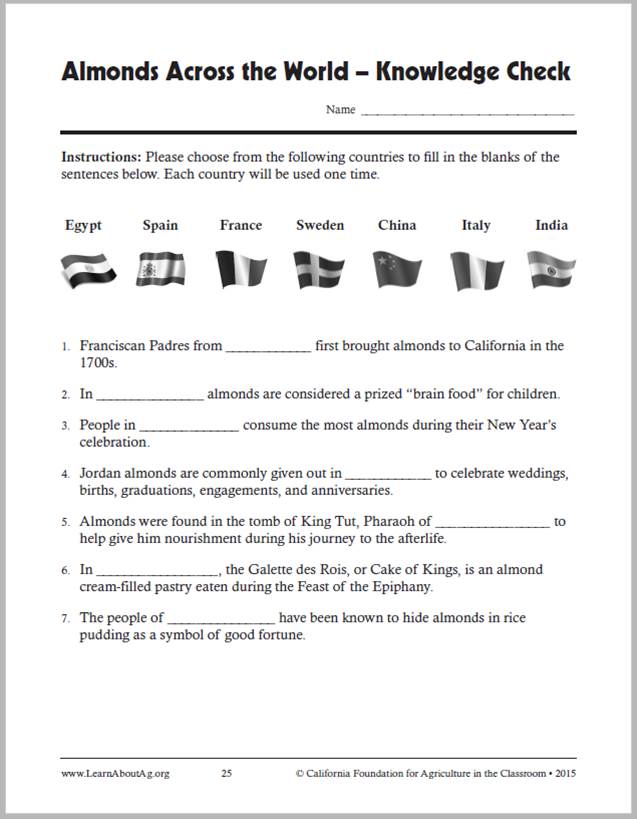 2.    Science and Poetry with Almonds

Not only are the lesson plans educational, they’re also a fun, hands-on way to bring agriculture and awareness of how food is grown into the classroom.

“The kids learn about almonds, but the plans also build in options for interactive activities,” said DeAnn Tenhunfeld, curriculum coordinator for California’s Ag in the Classroom program. “The lesson plans allow teachers to choose from having their students make recipe books, poetry books, travel brochures or even coordinate a farmer visit.”

Moreover, forging a personal connection with some of California’s farmers who grow the food that students see in the supermarket or on their plates can help them get excited to eat more nutrient-rich foods – something California’s known for. Given the breadth of agriculture in California and particularly the Central Valley means many students are already tied to agriculture in some way. However lesson plans like these go a long way in teaching important context about food and how it’s grown and make almonds much more than just a snack on a plate.