Almond milk has proven to be a satisfying option for people who are looking to avoid lactose; eat fewer animal products or less soy; get less saturated fat and cholesterol, and, in the case of unsweetened almond milk, watch their calories or sugar.

We know more consumers are interested in the environmental impact of their beverages, and we’d like to tell you more about the sustainable practices almond farmers employ on the almond’s journey to becoming almond milk.

Virtually all of the almonds consumed in North America are grown in California’s Central Valley. California is actually only one of five regions in the world with a Mediterranean climate. For almond trees, California is the place to be. It’s the most productive almond farming region on the planet thanks to the ideal climate, rich soil, and innovative growing practices.

California almond farmers are extremely proud of the innovative work they have done over the years to become even more efficient, responsible stewards of the land. In particular, as California recently went through a period of intense drought, it is important for you to know the work almond farmers are doing to be increasingly efficient with their water and create more sustainable water resources.

Farmers have been irrigating crops since 8,000 B.C.1, controlling water to help their crops flourish. Obviously, advances in irrigation management have evolved drastically, with innovation in almond orchards improving leaps and bounds in the last twenty years or so. In fact, today, 70 percent of almond orchards use efficient micro-irrigation systems to water their trees, which is above the norm in California and has helped almond farmers to reduce the amount of water needed to grow a pound of almonds by 33 percent since 1994.2 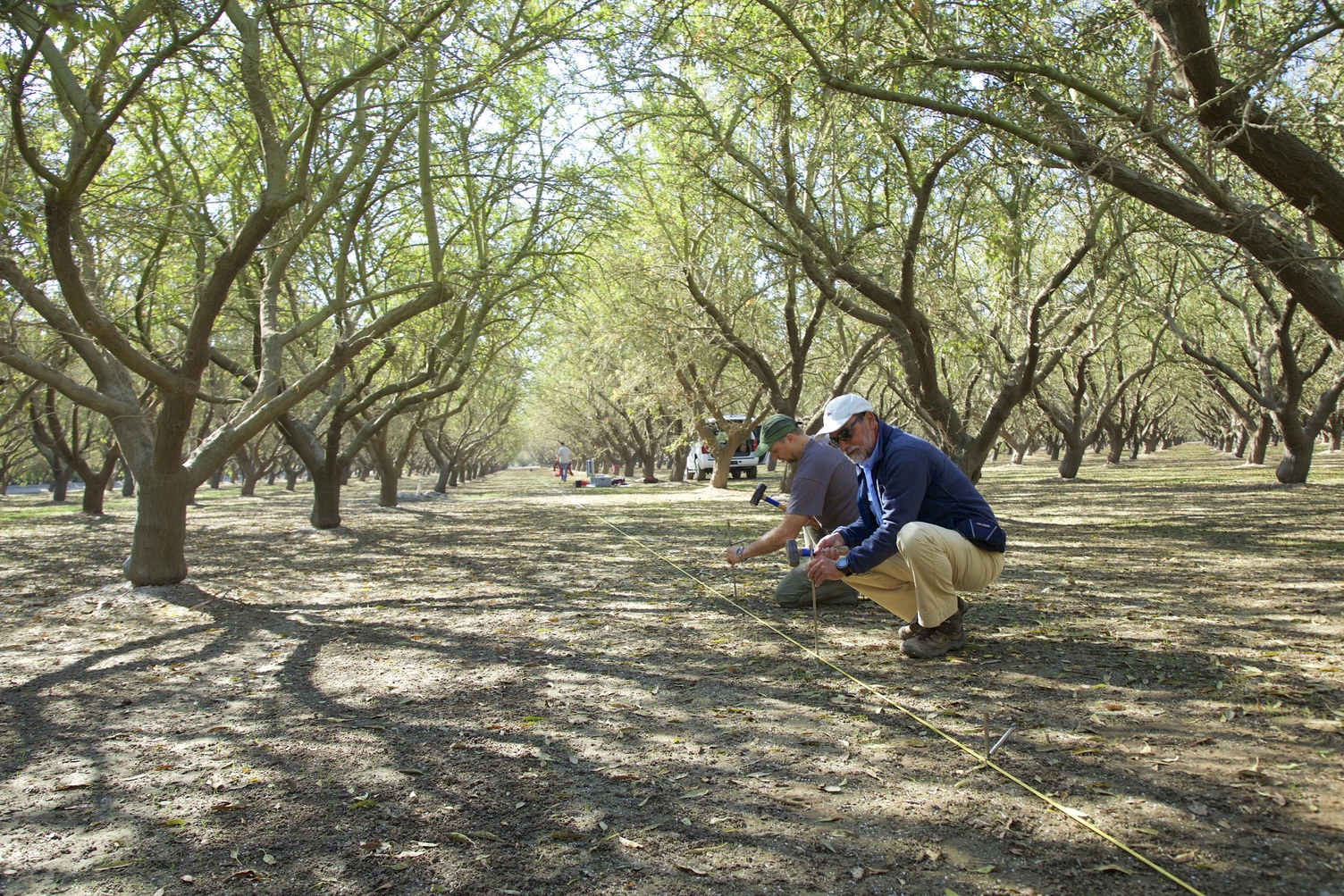 To continue to be leaders in this area, the Almond Board of California funds irrigation research – both to better understand and refine the basics that support grower day-to-day needs, as well as to help come up with creative, cutting-edge solutions key to innovation.

The water almond farmers use to irrigate their crops come from two main sources – surface water, which is managed through rivers, dams, canals and reservoirs; and groundwater, which is stored in ancient underground aquifers.

Groundwater has always been a vital resource in California and plays a critical role in maintaining California's economic and environmental sustainability, pumped for both residential drinking water as well as other urban and agricultural uses. An appropriate analogy for groundwater is that of a savings account. During dry times, the water is withdrawn (pumped), and can be restored with deposits (recharged) during wet times to maintain healthy and sustainable groundwater basins. During normal water years, groundwater is recharged by winter rains and snowpack.

Another way groundwater can be replenished is through managed groundwater recharge, intentionally flooding farms’ acreage when there’s a lot of water available. To understand how California’s one million acres of almond orchards can accelerate recharge in wet years, ABC has partnered with researchers from UC Davis, Sustainable Conservation, Land IQ, and Lawrence Berkeley National Laboratory, and almond farmers to conduct trials and measure results. 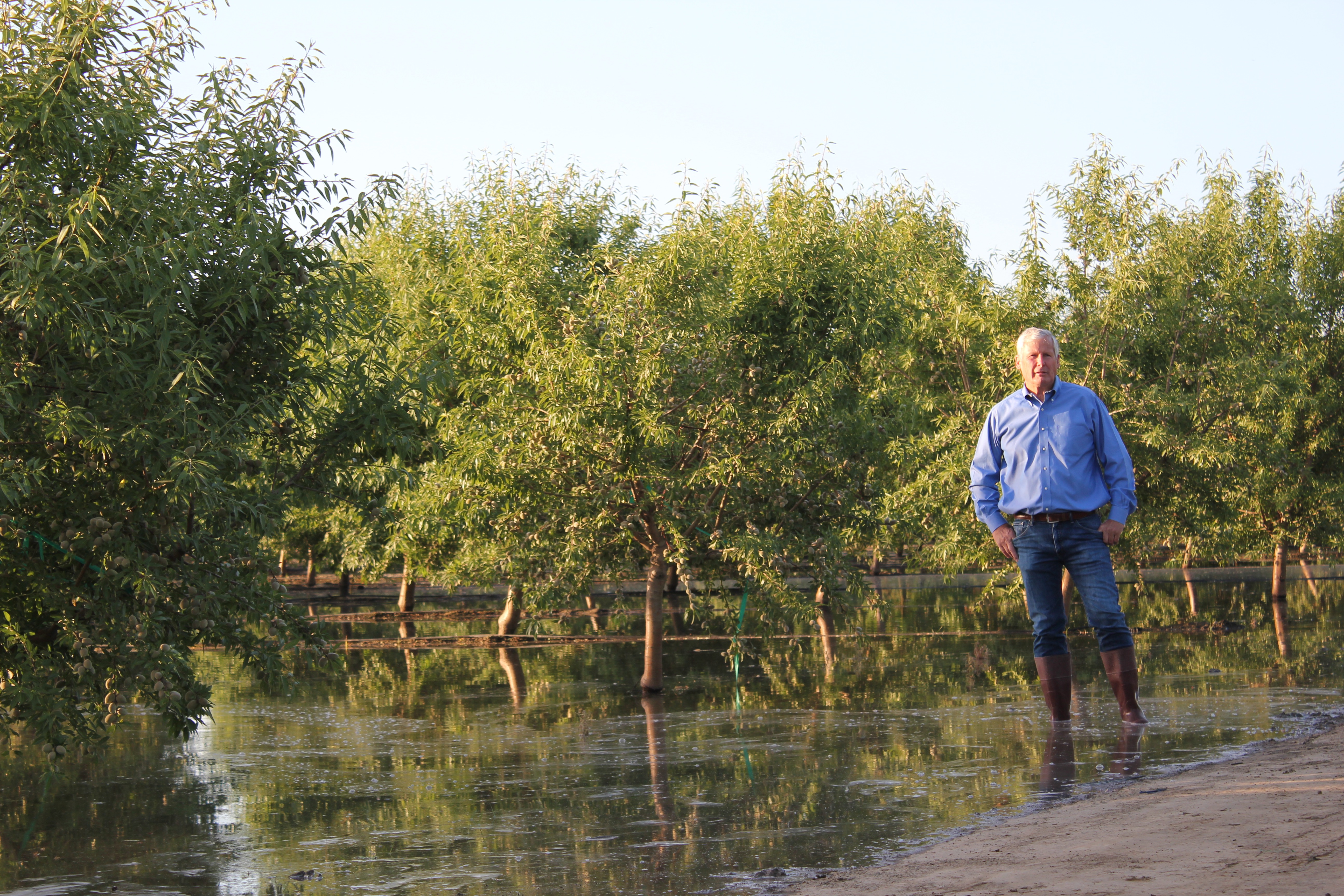 Groundwater recharge is simply managed flooding when extra water is available, but we’ve learned that some soil and regions within California likely will result in more effective and faster recharge. Our preliminary analysis indicates that 675,000 acres of California Almonds are moderately good or better in their ability to recharge groundwater based on soil and subsoil characteristics. Over the past year, the Almond Board of California and its research partners have:

After almond trees are watered, the almonds grow, and they’re harvested, the production of almond milk is fairly simple. If you’ve ever made it at home, you know that almonds blended up with water makes a naturally white milk. When you buy it in a carton, you can buy it sweetened, flavored or unsweetened. It often also has ingredients to keep the water and almonds from separating in the carton, and added nutrients.

So when you’re considering sustainability in your food choices, almond milk is a great option. To learn more about the other ways almond farmers are responsible stewards of the land, visit almondsustainability.org.