When California Governor Jerry Brown declared the state’s historic five-year drought over in April 2017, he made official what to most Californians had been all but obvious since the skies opened up late the prior year. For in addition to the 90 inches of rain and snow that fell in the California Sierra Nevada’s, the swelling reservoirs, urban flooding and strained levees left no doubt: winter 2016-2017 was California’s wettest on record.

Few were more buoyed by the moisture than California’s farming families. That’s because water is “the lifeblood of our industry,” says Tom Rogers, third generation almond grower in Madera County. “We simply cannot grow food without water. Farmers who depend on it have always been paying attention to water issues.”

And it’s precisely because California almond farmers have always been paying attention that the record rains—though much-appreciated—didn’t fundamentally change how they manage water on their farms. As Dr. Gabriele Ludwig, Director Sustainability and Environmental Affairs, Almond Board of California, notes, “Almond farmers have been through drought before, and they know they’re going to go through it again.”

So with the threat of drought always on the horizon, California almond farmers have long advocated smart and sustainable water use. And the Almond Board of California, which represents those farmers as well as California almond handlers, has made “growing more crop per drop” the goal of projects that not only improve water practices for the industry, but improve the state’s sustainability as a whole.

In California, growing almonds is largely a family affair. Farms passed down through generations are the heart of the state’s almond community, and through the combined efforts of 6,800 farmers and 105 processors, it produces 81% of the world’s almond supply and close to 100% of the almond supply in North America.

While California Almond farms can span from hundreds to thousands of acres, fully 61% are smaller than 501—like the farm that Danielle Veenstra, a senior specialist in sustainable farming communications at the Almond Board and third generation almond farmer, works with her family. “It’s the understanding that these farms are our legacy,” she says, “that keeps us mindful of the fact that we’re borrowing this land from future generations.” 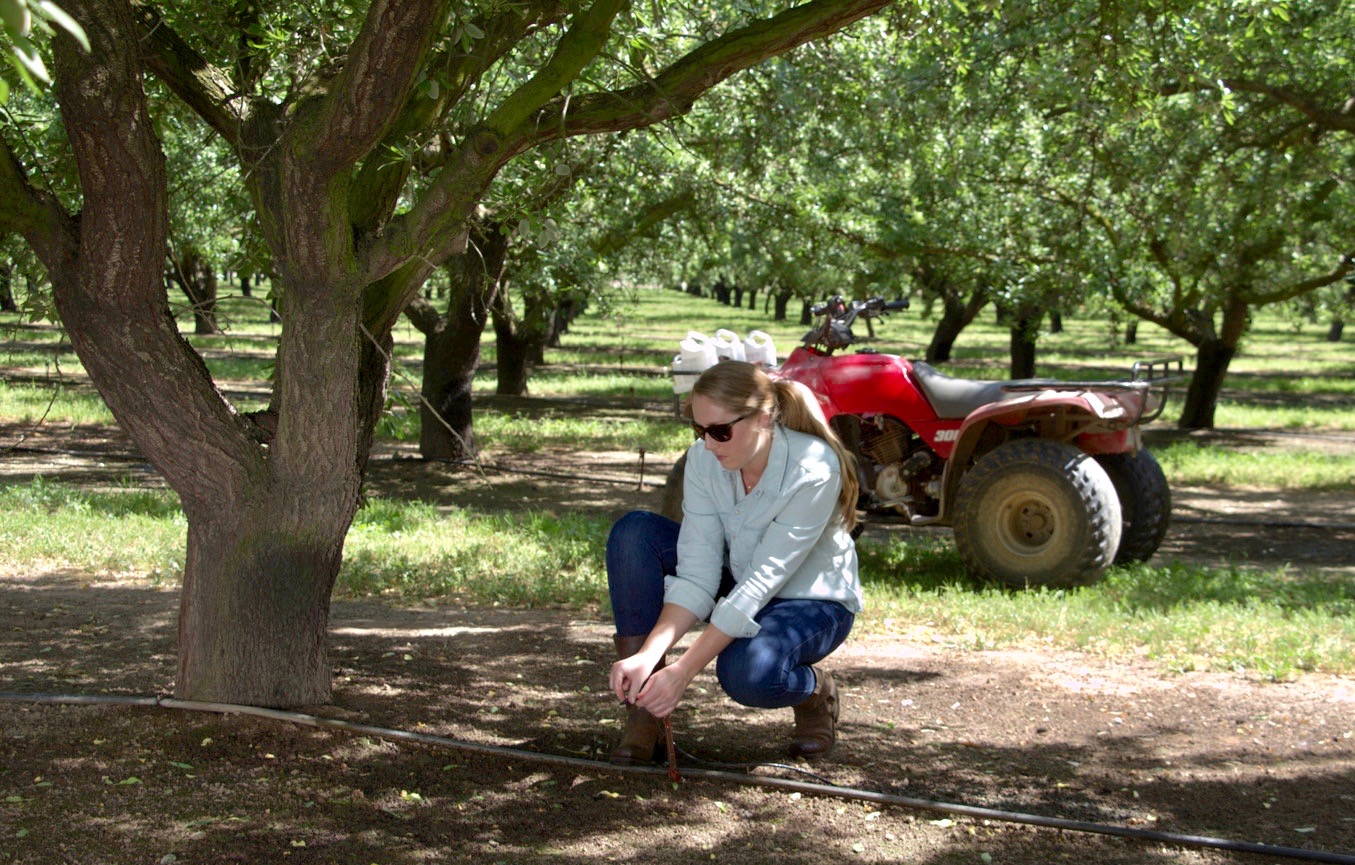 To sustain that land and legacy, the Almond Board of California invests considerably in studying everything from pest management and bee health to the air and water quality impacts of almond production. Last year alone, the Board invested a cool $4.7 million across 82 such research projects to explore next-generation farming and sustainability practices.

As an almond farmer, Veenstra is continually impressed by the Board’s dedication to science—and by the best practices and on-farm advice it yields. “It’s been an integral part of the industry’s sustainability overall,” she says. “I think it’s safe to say that the industry’s propensity for continuous improvement has come about because of this research.”

Among the improvements it pioneered are irrigation technologies that, over the past 20 years, have increased almond farmers’ water use efficiency by 33%, all in keeping with the industry’s “more crop per drop” ethos.

How have they done it? For one, demand-based irrigation monitors real-time weather, soil moisture and plant needs to determine the most effective irrigation protocol. Rather than relying on fixed—but often suboptimal—irrigation schedules, 83% of California almond orchards are managed using a combination of demand factors2, often tapping into some sophisticated tools to do so. These days, Veenstra says, smartphones and tablets linked to in-field real-time monitoring tools are as common a sight in almond orchards as tractors and harvesters. “Instead of thinking of irrigation as this big black box, they provide data that helps inform responsible irrigation decisions,” she says. 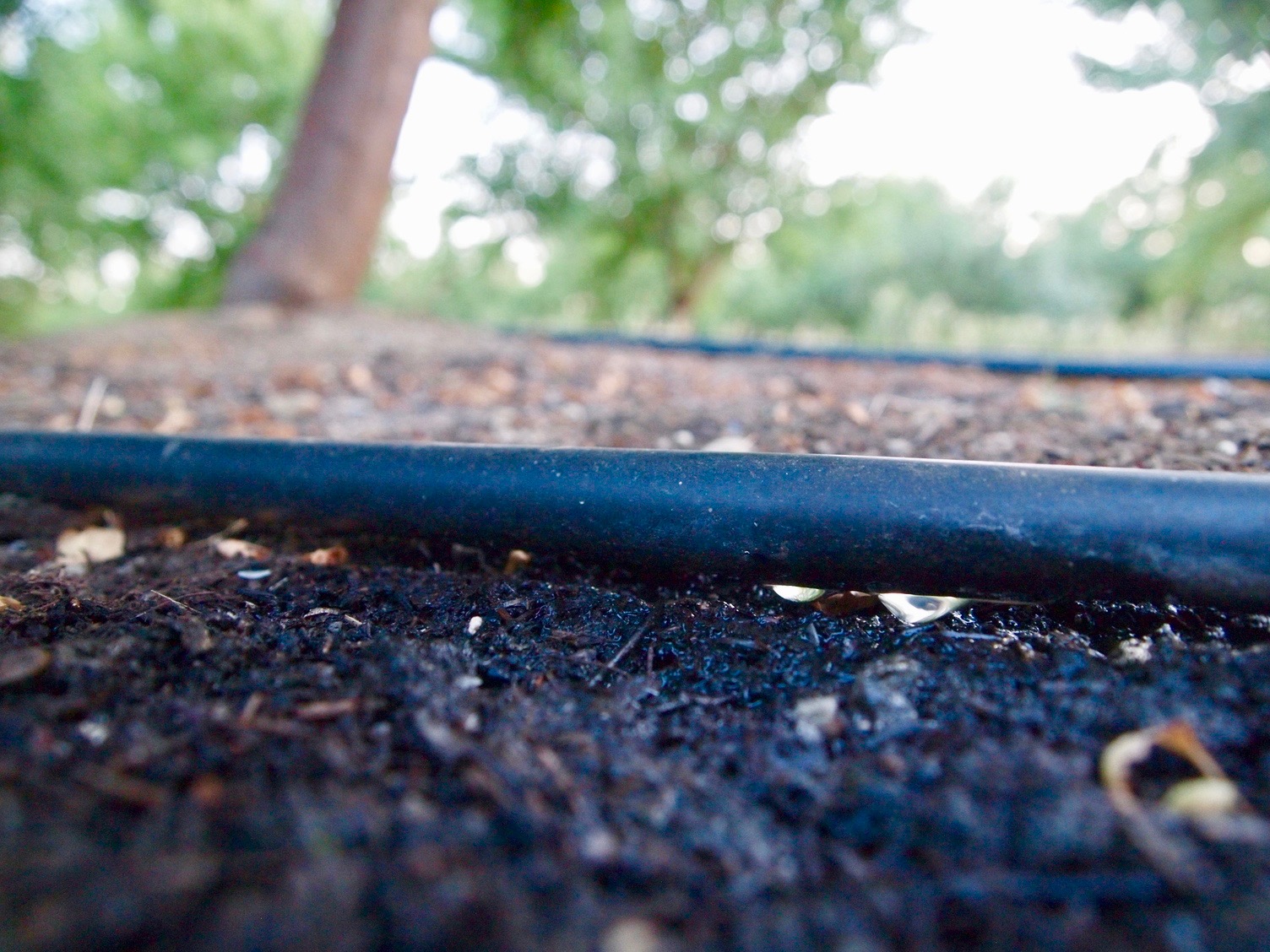 Microirrigation is another water-efficiency practice now the norm in California almond orchards.3 Flexible plastic tubing placed at ground level lets farmers aim water directly in the trees’ root zones instead of across an entire field. This reduces water lost to evaporation and obviates the need for large impact sprinklers or the flooding of graded fields. The practice emerged as a keystone lesson of Almond Board research begun in the late 1980s; after decades of testing, the benefits were clear enough to convince farmers that microirrigation was a natural fit for their orchards.

Thinking Beyond the Farm

Though microirrigation and demand-based irrigation have been instrumental in helping farmers stretch water further, an Almond Board project launched in late 2015 is looking beyond the farm to the state’s broader water picture and asks a bold question on behalf of the industry: How can we be part of the solution? One answer, it turns out, may be through groundwater recharge.

California’s aquifers are collectively the state’s single largest water storage reservoir, supplying 30 to 40 percent of the state’s water in normal years and up to 60 percent during droughts4. While the majority of California’s water comes from surface sources – like rainfall and snowmelt – groundwater has a significant role in growing food. But with farms, cities, suburbs and wetlands all drawing upon the same groundwater—and with drought a perennial threat—“our state’s water resources are being used to the limit,” Dr. Ludwig says.

So in 2014, the State of California passed the landmark Sustainable Groundwater Management Act (SGMA) requiring that each groundwater basin be managed “sustainably”—matching the groundwater that’s drawn out with what’s put back in. With all of California’s demands on water, that’s a tough equation to balance, so to bring it into equilibrium—and to ensure that farmers can continue to farm—the Almond Board is examining how California Almond orchards might play a role as a sink for excess winter rains which could be used to flood orchards during winter dormancy “and let it percolate down,” Dr. Ludwig says. 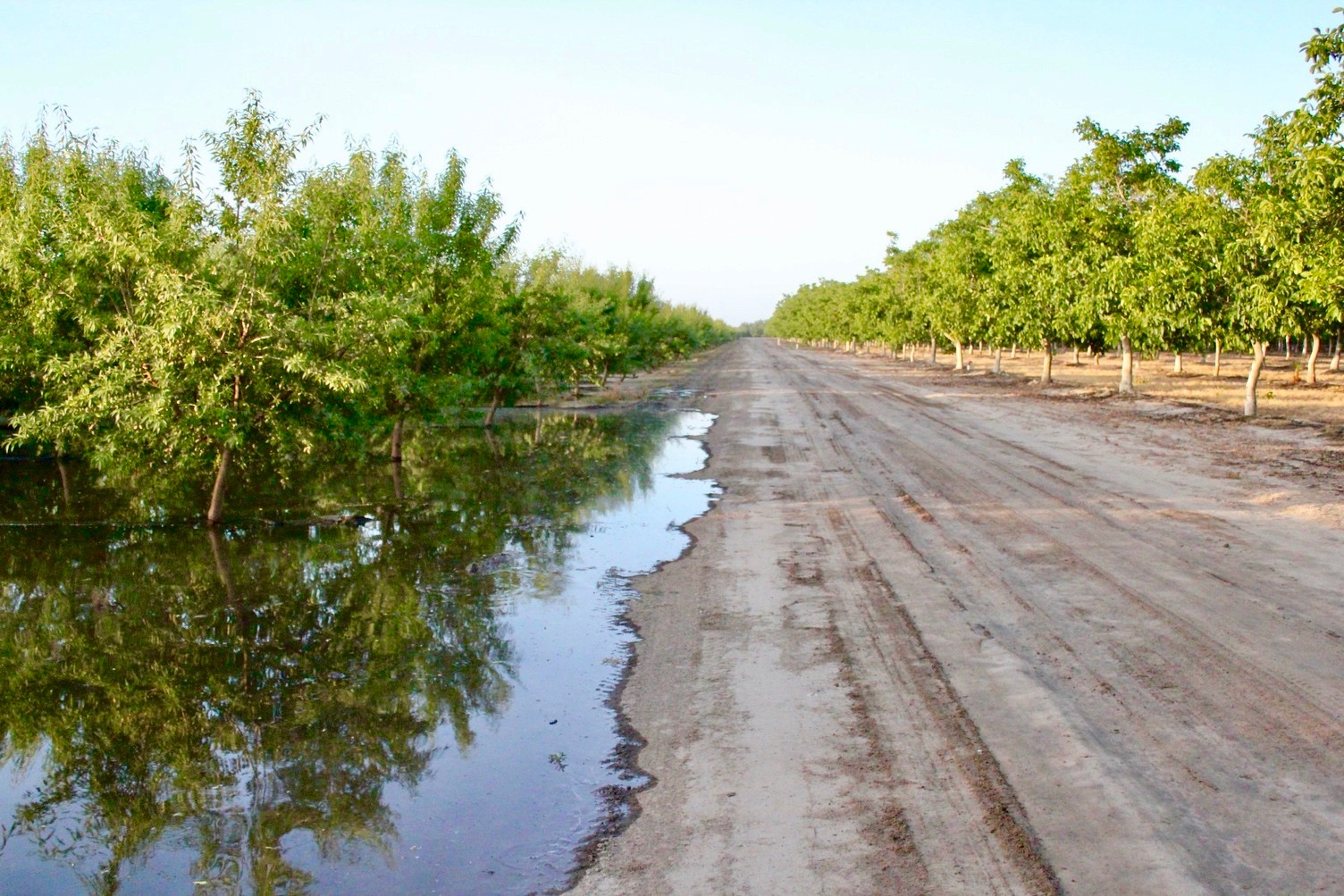 “To be able to know if we can do that, we need to do research,” Dr. Ludwig continues. So in addition to calling upon longstanding relationships with institutions like the University of California, Davis—which is studying how orchard flooding affects tree yield and health as well as groundwater quality—the Almond Board is building nontraditional partnerships with groups like Sustainable Conservation, which has a voice in policy discussions and on-farm demonstrations, Lawrence Berkeley National Laboratory, which is using geophysical imaging to “see” underground and how water is moving, and Land IQ, which has mapped the soil composition underlying California Almond orchards to gauge their potential for groundwater recharge’s success. One preliminary positive finding: the soil suitability of 675,000 acres of almond orchard appears to be “moderately good or better” for supporting groundwater recharge.4

The research has been progressing for two years Dr. Ludwig says, and the Board hopes to have “concrete recommendations” within five. (Some farmers, their fields already replete with excess water, are giving the concept a go even in the absence of concrete findings.) And if groundwater recharge works in almond orchards, who’s to say it might not be effective where other Golden State crops grow? “We in the almond industry are really leading the way with this recharge research.  We’re not just asking how we can farm better, but how we can do so in a way that’s better for our neighbors, better for our environment and better for our state.”

After all, another drought will descend on California someday. And when it does, the entire state—and everyone who enjoys the foods it grows—will be affected. That’s why growing more crop per drop will continue to be a priority for the Almond Board of California and the farming community it represents. As Eric Genzoli, almond farmer at Genzoli Almond Farms says, “We know that by improving our production efficiency, we’re using that precious, limited water resource in the best way possible.”