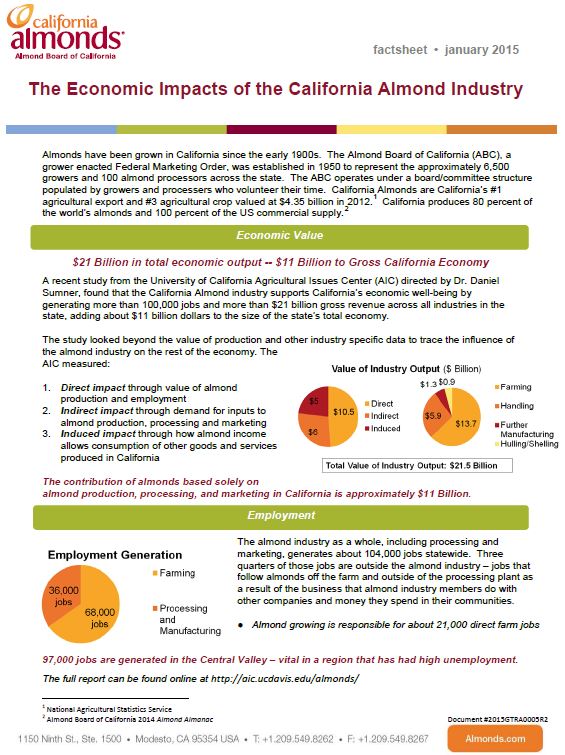 When it comes to the economic impacts of California almonds, maybe you’ve thought about the jobs on the farm and in the orchard, but did you know almonds also put people to work at hulling and shelling plants and manufacturing facilities, as well as generate jobs in supporting industries such as packaging and trucking? These employees then spend their hard-earned money at local restaurants and shops, on activities with their families, and any number of other goods and services in their community from groceries to new cars to school teachers.

In this way, California almonds both directly and indirectly affect the economy at every stage of their production. How much of an impact do they make? According to a new study by the University of California Agricultural Issues Center, the California almond industry as a whole generates about 104,000 jobs statewide. To put that in perspective, that's about as many people as General Motors employs throughout all of North America.1

According to the study, the almond industry supports the economic well-being of California by generating jobs across multiple categories, resulting in more than $21 billion of gross revenue in California and adding about $11 billion dollars to the size of the state’s total economy.

“Almonds have become a crop of choice in California because California is one of the only places in the world to effectively grow them,” said Almond Board of California CEO Richard Waycott. “This report shows how that advantage is translating into value – not just for growers but for their communities and the state as a whole.”

Throughout the state, the report’s authors note, farms and processors not only provide direct employment but “also buy goods and services from other local firms that also provide jobs and generate incomes” for business owners and employees. That income, in turn, buys local consumer goods and services in addition to paying state and local taxes. These “economic ripples” create “indirect” and “induced” jobs and value.

That effect is especially strong in the Central Valley - the heart of California's agricultural sector. In fact, the report finds that almonds contribute about 97,000 jobs to the Valley alone. “These jobs are vital in a region that has long had high unemployment,” it notes.

“Farming has been a critical source of value and economic activity for the state through good times and bad. In fact, even through the recession, the agricultural sector was a rare bright spot – and almonds have been a major part of that story,” said AIC Director Dr. Daniel Sumner, who led the study.