Each month, the Almond Board of California publishes a position report, which contain the most recent almond trade statistics. Growers and industry members can reference these reports to understand the trends impacting the almond industry.  The reports follow the Almond Board’s crop year (August 1 to July 31) which aligns with the almond crop production cycle. August, the beginning of harvest, marks the beginning of each new crop year and the following July position report rounds out the final shipment numbers for each year.

An Analysis of Everything the Almond Tree Grows: Kernels, Hulls and Shells

Included in the data from the 2017/18 crop year was an analysis of the full weight of almond tree fruit (kernel, hull and shell) that California almond orchards produced in that year. A supplement to the July 2018 position report, this report found that in addition to the 2.264 billion pounds of almonds produced by the industry last year, the almond trees (and the resources used to grow them) also produced 4.527 billion pounds of hulls and 1.593 billion pounds of shells.

Almond hulls and shells, along with the woody biomass of the trees themselves are also known as coproducts.  For decades the almond community has utilized these coproducts for nutritious cattle feed, livestock bedding, cogeneration and other value-added uses.

Recent changes in almond coproduct markets have led Almond Board of California to focus research investment on new, viable uses for almond hulls, shells and trees. The potential applications for these coproducts can not only bring value to the California Almond community, the local environment and contribute to zero waste, but address greater needs across industries such as food, pharmaceuticals and automotive.

Almond Board of California provides a comprehensive mapping analysis to improve the precision, accuracy and transparency of information about the almond industry. Understanding the impacts and opportunities of almond production is fundamental to responsible resource management, regulatory compliance and planning for the sustainable future of California agriculture. The maps, developed in partnership with Land IQ, a Sacramento-based agricultural and environmental scientific research and consulting firm, constitute a comprehensive, living map of California Almonds that draws upon multiple sources of information and extensive validation to create a highly accurate, orchard-by-orchard view of the industry.

Behind the maps is a robust data set. The 2016 Standing Acreage Initial Estimate includes estimated almond acres, bearing and non-bearing, by county and by year planted from 1984 through 2016. It is based on standing acreage in 2016 and is also reflected in the 2016 almond acreage map layer. Bearing acreages have all been verified via ground truthing and/or spatial approaches.1 Non-bearing acreages are considered to be 2014, 2015 and 2016. All non-bearing acreages should be considered as estimates at this time and will be finalized following completion of the 2018 mapping. 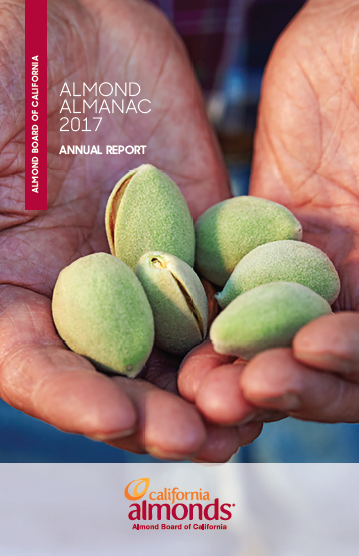 The Almond Board of California’s Almond Almanac is an annual year-end report that provides a glimpse into what makes up the California Almond growing and processing community.  Published on a crop-year basis (August 1 to July 31), the report provides a compilation of industry statistics, including production, shipment and consumption numbers as well as a look back at how those figures compare to prior years. It also provides a comprehensive overview of the Almond Board's programs.

Below are past Almond Almanac's for historical reference: