Experts Share the Impact of COVID-19 on California’s Agenda 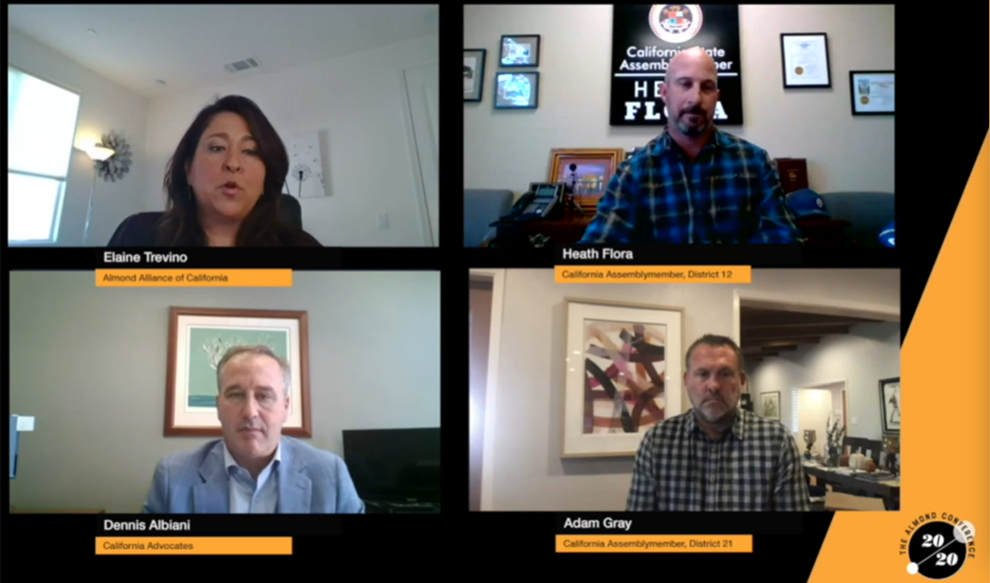 COVID-19 had a huge influence on the state’s agenda in 2020, focusing the Legislature on a narrow set of issues such as public health and wildfires. An expert panel at The Almond Conference 2020, held last December, expressed hope that things will begin to return to normal in 2021, but warned that “normal” still means challenges for agriculture.

“It comes down to simple math,” said 12th District Assemblymember Heath Flora, who represents an important almond-growing area including parts of San Joaquin and Stanislaus counties. “The majority of our colleagues are in urban areas.”

Because agricultural regions represent just a fraction of the state’s population, Flora said Central Valley elected representatives and their constituents, including almond growers, must continually work together to educate state leaders about their issues.

The panel, moderated by Chief Executive Officer Elaine Trevino of the Almond Alliance of California, also included 21st District Assemblymember Adam Gray, who represents all of Merced County and parts of Stanislaus County, and lobbyist Dennis Albiani of California Advocates.

Albiani, a veteran Sacramento advocate, said the 2020 budget year “started out normal,” with legislators and Gov. Gavin Newsom’s administration discussing how to best use the state’s budget surplus. That all ended when late-February hit.

“COVID hit the institution and it really shrunk expectations,” Albiani said. “As they went on, they really tried to narrow it down.”

The COVID-19 agenda ended up putting significant pressure on agricultural businesses, he said.

“One of the really big issues we saw was, “How were employers going to address COVID-19?’” Albiani said. “Many of the more progressive labor groups took advantage of the COVID opportunities and pushed an agenda that would not have been acceptable in normal times. We spent a lot of time pushing back on the labor issues.”

Albiani said agriculture representatives have been successful – at least for now – in holding off the most controversial proposals, such as one that would have offered hazard pay to agricultural workers.

Despite the narrower set of issues, the state put continued pressure on pesticide use in 2020, banning use of chlorpyrifos as a fumigant. Additional restrictions were placed on rodenticides known as “second-generation anticoagulants,” but advocates for agriculture were able to maintain exemptions allowing their use in agriculture and food processing settings, Albiani said.

With the state budget revisions, maintaining funding for agricultural programs was a hard fight, Albiani added, but there were some successes.

Assemblymember Gray said he was concerned about what he saw as a lack of attention to the needs of essential work forces, such as those in agriculture. He said the state started off with a good strategy in early 2020, but things then veered off course.

“I think we’ve seen the demonizing of essential work forces like agriculture,” Gray said. “While we’ve seen resources flow to our urban communities such as PPE and other supplies, we’ve seen blame head the way of Central Valley communities like my district, where we’re continuing to do the work each and every day, to make sure we can put food on the table of all Californians … yet we’ve seen employers up and down the state blamed as if they don’t care for their employees.”

Asked by Trevino what he sees as the biggest challenge for agriculture in state policies in 2021, Gray called for temporary relief on regulatory processes.

“I think the biggest challenge to agriculture in the next year is going to be the implementation of SGMA (the Sustainable Groundwater Management Act) while we’re dealing with an economic recession and a public health crisis,” Gray said. “There is definitely a tone-deaf response to the Legislature by both the water board and the administration. We’re not realizing that we need to hit the pause button in some of these regulatory spaces, amidst an economic crisis, so we can experience an economic recovery, get stable footing, and then figure out how to move forward together.”

Flora said the COVID-19 pandemic not only shaped the policy agenda during 2020, but the ability of lawmakers to engage with each other.

“I only have one vote. My entire ability to do business in Sacramento is based on relationships,” he said. “It’s really challenging to build relationships through a computer screen. I think COVID has absolutely devastated our ability to do our jobs.”

As the Legislature returns to work in 2021, Flora said he will once again pursue legislation that would require the state to develop a carbon credit offset program for almond growers and others who return carbon to the soil through the process of Whole Orchard Recycling.1 His previous bill to allow that, Assembly Bill AB 2831, died in the 2020 session. Trevino of the Almond Alliance called the bill “long overdue” and pledged to continue the Almond Alliance’s support.

“It’s been very curious to me why certain local governments can get credit for planting certain trees or certain vegetation and meet these carbon sequestration goals because of the vegetation they are planting, but our growers plant roughly 130 trees to the acre but we get no credits for that – there is no offset for that,” Flora said. “It is going to be one of our top priorities this year to see if we can’t make this happen.”