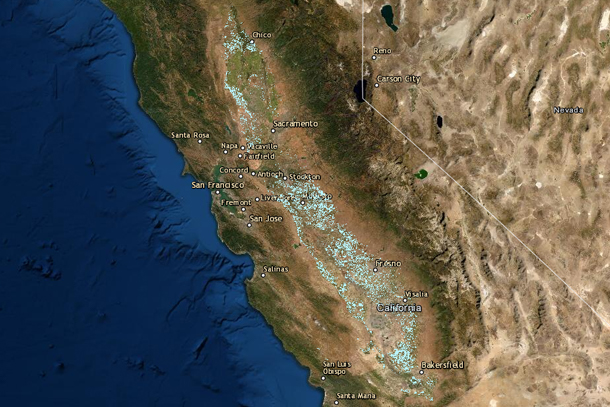 Beginning in 2019, the Almond Board adjusted the mapping process of the Land IQ data to include annual reporting that now involves the release of two acreage summaries: an initial estimate that includes a bearing acreage estimate, and a final estimate that includes bearing and non-bearing acreage estimates for the same production year. The final estimate builds off the initial estimate earlier in the year by utilizing a combination of extensive ground-truthing and advanced remote sensing analytics to refine Land IQ’s initial findings.

Removals increase, due to drought?

While industries continue to slowly rebound from COVID-19 impacts, farmers also faced a familiar foe in 2021 – limited water. In 2020 the Land IQ report started tracking tree removals in its acreage count. According to the 2021 report, drought impacts may have played a role in an increase of acreage removed year-over-year. The Land IQ data estimated 56,949 acres of almond trees were removed this year, nearly 10,000 acres more than the initial projection in April, and 18,132 acres more than were estimated as removed in 2020.

The report shows that most counties had more removals in the final version versus the initial estimate, with Southern San Joaquin counties showing the biggest increase.

According to Land IQ, these categories are defined as…

“ABC has been working with Land IQ for several years to continually improve the process, and ultimately the data, provided in these estimates,” said Almond Board President and CEO Richard Waycott. “Combining these numbers with those of USDA’s National Agricultural Statistics Service creates very useful information for the industry. The new data added to the process over the last two years will further the knowledge of the ebbs and flow of California almond acreage.”

Industry members are encouraged to visit the Almond Board website at Almonds.com/Maps for more information on the 2021 final estimate and to view Land IQ’s updated layer map. Any technical questions about the map may be directed to Land IQ at (916) 265-6358 or technical.support@landiq.com.

Topics: About the Almond Industry, Water