Selecting the best variety for your orchard.

Selecting almond varieties is a long-term decision that comes with many considerations. Once almond varieties are selected, additional decisions must be made to determine tree spacing and orientation and managing the orchard to optimize light interception.

Among the many attributes growers must consider in selecting varieties and rootstocks:

The Almond Board of California began funding almond variety development research in the early 1970s and expanded that effort to include rootstock breeding in the late 1980s, investing an estimated $8 million, to date. In the past twenty years, this research has delivered five new University of California varieties (Padre, Sonora, Kester, Winters and Sweetheart), and supported testing of most commercial varieties and rootstocks for overall performance, resistance to pests, diseases and abiotic stresses, providing growers with information on options for different growing conditions.

Nurseries and private breeders have always played an important role in the introduction of new almond varieties and, in particular, accessing international rootstock for commercial release in California. To provide a mechanism to test the performance of new varieties across the diverse almond growing regions in the state, and under different soil conditions, in the 1970s the Almond Board began supporting long term and multilocational Regional Varietal Trials (RVTs), spanning from 1974 to present. In addition, in November 2019, ABC held its first ever “Crack-Out” event with the purpose of engaging the entire industry in a more comprehensive evaluation of new almond varieties. This event brought together public and private breeders, growers and handlers, hullers/shellers, UC researchers and nurseries to sample more than 60 varieties of almonds.

Breeding is an art of balancing improvements while accepting some trade-offs. To define this balance, experts must consider the various segments of the almond industry, starting with the growers, moving to the hullers and shellers, handlers, food companies, and then, ultimately, the consumer. In August 2020, the Almond Board published its Almond Varieties and Selections report, which provides and evaluation of national and international varieties or selections under development. Looking ahead, ABC will continue to work with researchers, breeders and nurseries to improve the value of industry investments in new variety development and evaluation, and share the findings from those efforts with the industry. 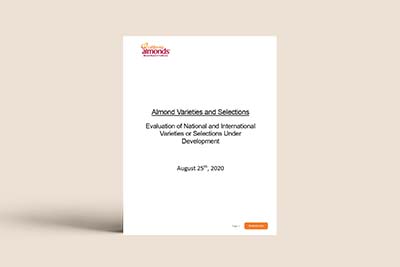 From 1996 to 2006, regional variety trials, sponsored by the Almond Board, were conducted by University of California Extension researchers to determine the attributes and performance of available varieties under different growing conditions. A new series of regional variety trials were planted in early 2014, with orchards in Chico, Salida, and Chowchilla representing some of the climate, soil, water and topographical variation seen within California’s almond-growing region. A number of varieties in these trials are self-compatible. The results of this ongoing research help growers determine the optimum varieties for their own individual needs and resources. 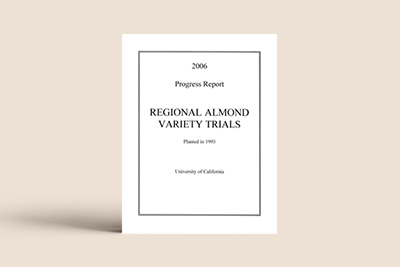 A decade of Almond Board–funded research continues to challenge once-held assumptions about almond pruning and tree spacing and their impacts on production efficiency and yield.

To optimize production, the almond orchard should be designed and managed to maximize light interception through pruning, training and spacing while still allowing light to reach the orchard floor. 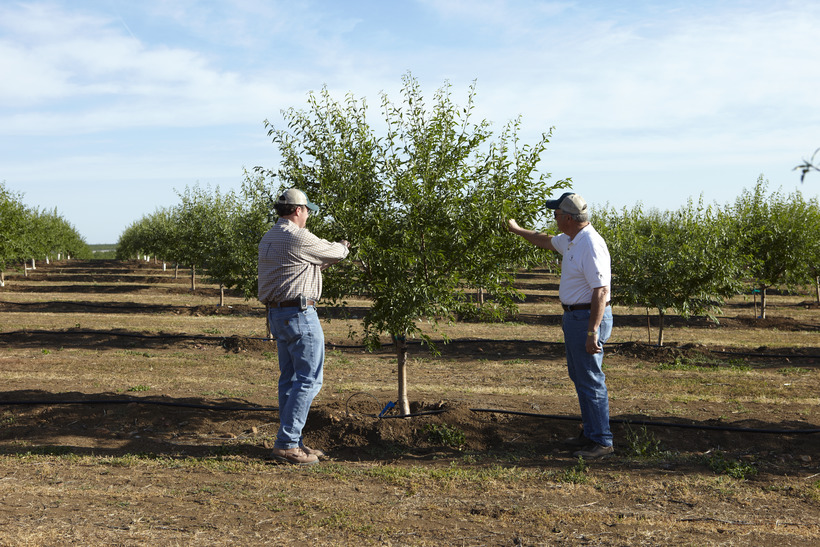 Research trials throughout California have demonstrated that there are many reasons to prune an almond orchard, but yield does not appear to be one of them. Trials have also confirmed that traditional tree spacing of 22 feet by 22 feet or more is too far apart to intercept the light necessary to optimize per-acre production in the orchard.


The Research Database provides almond growers a one-stop shop on years’ worth of research in this area.