Community Conversations: Almond Growers Are Committed to Innovation and Sustainability

Actively engaging the community in important discussions about growing almonds, representatives from the Almond Board of California recently participated in major events in San Francisco and the Central Valley to explain the life cycle of almonds and answer questions about the industry’s commitment to sustainability1, water efficiency and next-generation farming practices.

“We’re making a concerted effort to accept invitations to public events, where we can respond to questions and have an important discussion about almonds, the family farmers who grow them, and the nearly 100,000 jobs in the Central Valley supported by the almond industry,” said Almond Board CEO Richard Waycott.

Staffers at the Almond Board used these events to share the journey of almonds from the orchard to the table. This includes explaining the multiple crops that almond trees produce, the stages of almond growth and development, how almonds are processed, the history of almonds, the many forms and uses of almonds here in California and around the world, and the state of the science on almonds’ nutrition and health-related benefits. 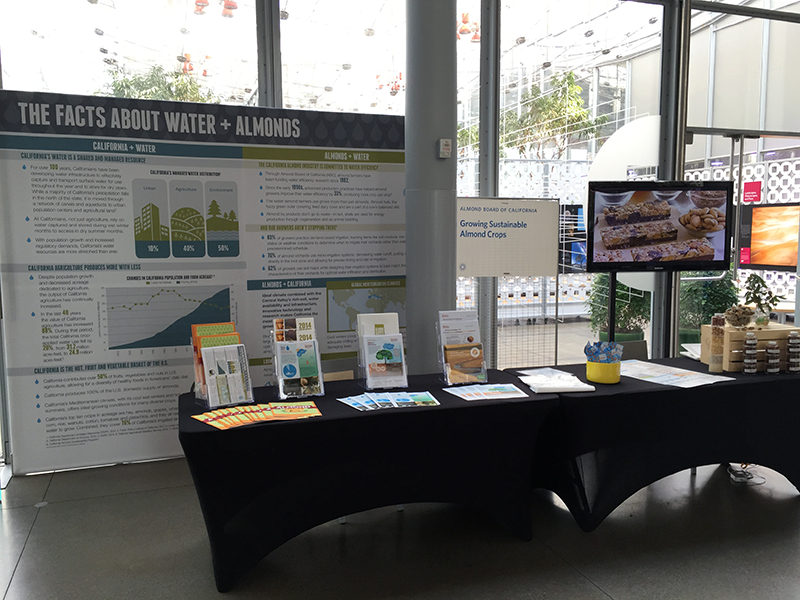 Presenting The Almond Story at the California Academy of Sciences in San Francisco, CA

The Almond Board also participated in the recent Valley Water Summit sponsored by the Modesto Bee and the City of Modesto, staffing a booth to reach out to the 450 attendees, provide information and answer their questions.

Almond Board staffers received a lot of great questions during these events, and we’re always happy to provide accurate information and clear up misconceptions. Here are a few questions we’ve received over the last few weeks:

Why do almonds take so much water to grow?

The simple fact is it takes water to grow food – whether that food comes from a plant or animal. But what you may not realize given the recent media coverage is that an almond tree uses about the same amount of water as most California fruit and nut trees2.

Almonds grow on 13 percent of California’s cultivated land but use only nine percent of the state’s agricultural water.3 Most importantly, California’s almond growers take pride in using water as efficiently as possible and are focused on getting the most crop per drop.

What are you doing to use less water?

California Almond growers have been focused on water efficiency long before this drought. In fact, for several decades the Almond Board has been leading the way to water efficiency, investing in over 91 independent irrigation research projects to date. Because of this important research, almond growers were early adopters of water-saving micro-irrigation and other technologies that have helped reduce the amount of water it takes to grow a pound of almonds by 33%.4 In fact, almond growers have adopted efficient micro-irrigation far above the average reported for California irrigation methods; 70 percent of almond growers use micro-irrigation systems and more than 80 percent monitor the soil and irrigate based on the needs of the trees.5 While there’s more work to do, the California Almond community understands what precious natural resource water is and will continue to invest in important research to look for ways to improve water efficiency and overall sustainability.

Why not just grow them in a different part of the country?

California’s Central Valley has a Mediterranean climate. Almonds can only effectively be grown in a Mediterranean climate – and there are just five of those climate areas worldwide. California is the only place not just in the U.S., but in North America, where almonds can thrive. As a result, California produces 99 percent of the almonds consumed in the United States and more than 80 percent of the global supply, supporting over 100,000 jobs in California.6

Not only are almonds are an important part of California’s economy, they’re also important for storing carbon and reducing greenhouse gas emissions. Recent research indicates that the almond industry is making progress toward becoming carbon neutral or even carbon negative with respect to greenhouse gases.

[1] California Almond Sustainability Program definition: Sustainable almond farming utilizes production practices that are economically viable and are based upon scientific research, common sense and a respect for the environment, neighbors and employees. The result is a plentiful, nutritious, safe food product.