This post was written by Stanislaus County almond grower Jim Jasper of Stewart and Jasper Orchards.  Stewart & Jasper has expanded over the years and is now an integrated operation involving thousands of acres - a leader in hulling, shelling, processing and marketing almonds to California and the world through both wholesale and retail channels. Jasper has made service to the industry a priority, dedicating more than 15 years to the efforts and vision for the almond community. He has been very active with Almond Board of California, serving on multiple committees and task forces and was awarded the Almond Achievement Award in 2015. 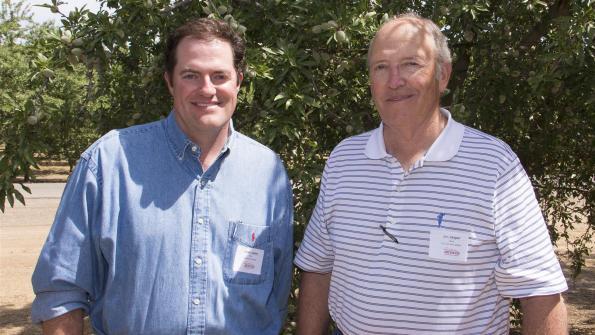 Given that all food needs water to grow and that America’s agricultural bounty helps to feed the world, the continued assertion in some quarters that California almond growers somehow “export” our state’s water by selling some of their crop overseas is perplexing and misguided.

The bigger question is when did exporting American products – food or otherwise – become a bad thing? Bringing more balance to our global trade equation is a vital national priority.

Trading globally gives consumers and countries the opportunity to be exposed to new markets and products. According to the U.S. Chamber of Commerce, “America cannot have a growing economy or lift the wages and incomes of our citizens unless we continue to reach beyond our borders and sell products, produce, and services to the 95% of the world’s population that lives outside the United States.”

Like many other American businesses, farmers and ranchers also depend on exports. The U.S. Department of Agriculture reports that one in every three acres on American farms is planted for export markets.  Rising incomes, urbanization, improved transportation and changing demographics globally have increased consumer demand for American products – including almonds. That’s a good thing for all of us.

It’s also important to note that, without the global food trade, Americans would not be able to enjoy many desirable food products from abroad, like cinnamon and other spices, chocolate, off-season produce and many others.

The fact is that virtually all the almonds eaten in the U.S. come from California.  The U.S. is the California almond industry’s largest market. California also provides more than 80 percent of the entire global supply of this highly nutritious food that’s consistent with positive global trends like healthy, convenient snacking and plant-based diets.

The foreign trade aspect is crucial because, unlike so many other things we buy every day in this country, California’s orchards supply all the almonds we need in this country, with an economically important supply for the rest of the world.

Almonds also provide livelihoods for thousands of multi-generation family farms1, support more than 100,000 California jobs, and contribute more than $21 billion a year across multiple categories to our state’s gross revenue.2

Grown productively in only five regions on earth, almonds thrive in Mediterranean climates like we have here in California. A key reason California produces most of the world’s almonds, as well as over 50% of the nation’s fruits, nuts, and vegetables, is because our Central Valley has an ideal climate and soil composition.  Furthermore, the Almond Board of California invests more than $2.5 million a year in next-generation farming research to fuel continuous innovation to ensure the California almond community can continue to grow nutritious food in a sustainable way.

Almonds are important to our economy, and people around the world want them too.  This is a comparative advantage for California in the global marketplace.

California almond growers have always understood that our water resource is precious. Yes, we are business people and make decisions based on the same factors as any business: supply and demand. But we also understand that if we don’t manage our land and resources responsibly, we risk our livelihoods as well as the future livelihoods of our children and grandchildren who we hope will take over our family businesses in years to come. We make an extra effort to be responsible with the water we use in our orchards, and we take great pride in growing almonds for the world.