What does #HeartWalking mean to Almond Board of California?

It means assembling The A Team – 10 staff members, four furry friends and one stylish 15-month-old – to accomplish one goal: raise awareness and funds for victims and survivors of cardiovascular disease and stroke.

On Sept. 16, Almond Board of California (ABC) partnered with the American Heart Association (AHA) to participate in the 2017 Stanislaus Heart & Stroke Walk. Held at California State University, Stanislaus in Turlock, this event gathers local businesses and community members together to raise funds for lifesaving education and research, provided by the AHA.

As the leading cause of death in this country, cardiovascular disease claims almost as many lives each year as the next seven leading causes of death combined, according to the American Heart Association. Jayme Puthoff, Senior Administrator, Industry Services at ABC, understands this reality all too well. Puthoff’s uncle died of heart problems, and so she walked with The A Team “to pay it forward for a great cause.”

The Almond Board’s involvement in the Heart Walk went beyond our team of #HeartWalkers, however.

This year, the AHA selected Almond Board of California as the Heart Walk’s official Healthy Snack Sponsor. Almonds have long been recognized for their heart-healthy* benefits. In fact, nearly two decades of research show that almonds can help maintain a healthy heart.* Data based on 18 human studies provides evidence that the consumption of almonds as part of a healthy diet helps maintain healthy blood lip levels and reduce the risk of heart disease, and, to date, ABC has funded 22 research projects, published in 27 scientific publications, on the topic of heart health.

“It was great to be recognized as the Official Healthy Snack Sponsor because almonds, being beneficial for heart health, are a natural fit with this event,” said Becky Jeffers, Manager, North America Marketing at the Almond Board.

As the Healthy Snack Sponsor, ABC hosted a booth where staff had the opportunity to interact with fellow community members and pass out almond tins, “An Almond Story” booklets, which teach children about almond growing, including pollination, and other almond-related resources.

“Interacting with our local community about a local product everyone can be proud of is very fulfilling,” said Jeffers. 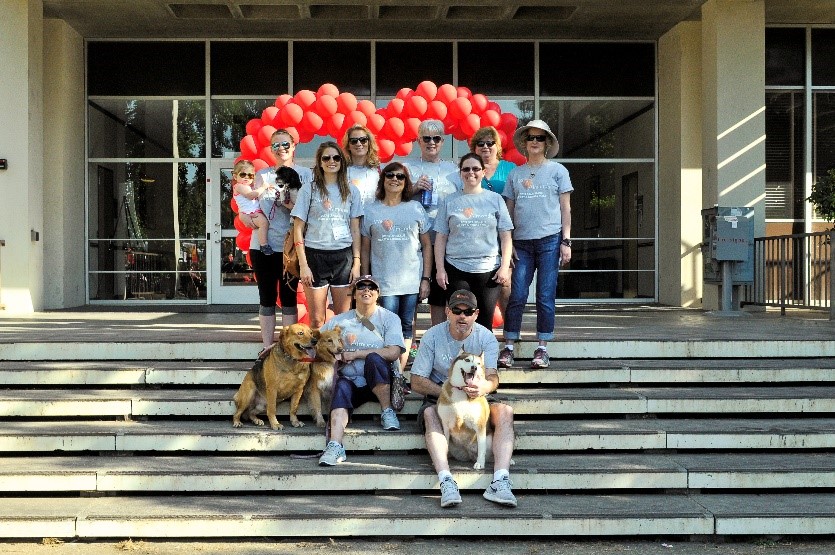 Walking Together, Walking for Health

To raise funds for the AHA, The A Team decided to take a more creative approach to fundraising.

ABC joined with Art Time & Sip Wine Studios, a paint n’ sip business, to raise money for heart disease and stroke victims. One evening after work, team members attended a paint class at Art Time, located near our office in downtown Modesto. There, they enjoyed painting a sweeping nature scene, sipping Chardonnay and spending time together beyond office walls.

The fun didn’t stop there, though.

Our ABC duo of an aunt and niece prepared homemade jams and canned pickles to sell to the office. Together, they raised over $500 dollars. Additionally, together, The A Team surpassed its fundraising goal.

Together, we promoted healthy living within our community, a cause that The A Team and Almond Board of California as a whole are passionate about.

“Taking my 15-month-old baby girl, Ella, and our dog, Zooey, on this walk was a fantastic way to spend time together, create healthy habits and lifelong memories together while supporting such an importance cause,” said Jenny Nicolau, Manager, Industry Relations.

“It’s an honor to be part of an organization that truly believes in encouraging its employees to be healthy and supports impactful community events like the American Heart Association’s Heart Walk,” said Nicolau.

*Good news about almonds and heart health. Scientific evidence suggests, but does not prove, that eating 1.5 ounces of most nuts, such as almonds, as part of a diet low in saturated fat and cholesterol may reduce the risk of heart disease. One serving on almonds (28g) has 13g of unsaturated fat and only 1g of saturated fat.