Del Puerto Water District General Manager Anthea Hansen has recently tackled the challenge of finding a new water source in California, overseeing the implementation of miles of pipeline carrying treated water from the City of Modesto’s wastewater treatment plant to nearby farms.

The North Valley Regional Recycled Water Program, a collaborative partnership between local cities and the Del Puerto Water District, is sending this triple-treated wastewater to some 200

family farms along the west side of California’s Central Valley. There, farmers can put it to good use growing food, including almonds.

In time the project will deliver treated water from Modesto, Turlock and, to a lesser degree, Ceres to farmers along the west side of the Central Valley, and, in wet years, it will provide water to nearby wildlife sanctuaries too.

“You have to stay focused,” Anthea said of tackling such a large-scale project. “There’ll be good days and bad days, but be persistent, and keep checking things off the list. This is the most important thing we’ve accomplished, by far, in a long time.”

The North Valley Regional Recycled Water Program began with pipeline laid from the Delta Mendota Canal, under the San Joaquin River, to the City of Modesto’s water treatment facility where several large pumps were installed to move the treated water from the facility to the canal. The next phase of the program will connect the City of Turlock’s water treatment plant to the Modesto facility and is expected to be completed in the next year. 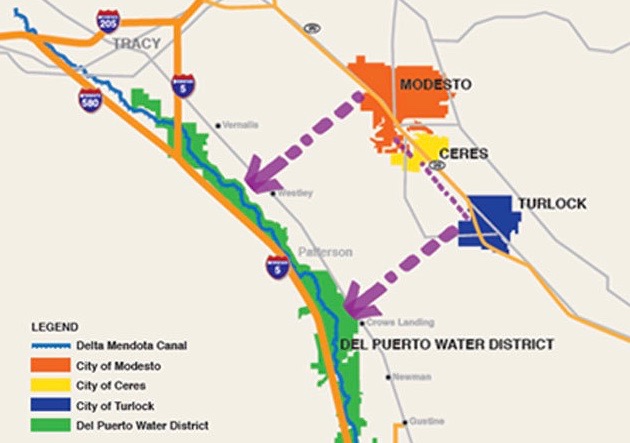 Anthea notes that the project is supplying about 3.1 inches per year to the 45,000 acres in the district. With the completion of the pipeline from Turlock, that number is projected to increase to six inches. While that may not sound like much, Anthea notes that its very meaningful. “It’s reliable; it’s not dependent on rain [or snow], or the ability to convey it. It’s all in a closed system.”

“These [awards] are lovely to receive,” Anthea said, “but the true reward is that the water supply’s coming to the farmers.”

Anthea has been with the Del Puerto Water District for 18 years and took over the reins of the district after the retirement of former General Manager Bill Harrison. She has been working on this recycled water program for almost half of her time at the district.

“The project has become a model of forward thinking in the Valley about how to come up with new sources of [water] supply,” she said. “We have to take care of the environment, as well. I think this one was a win-win.”

Learn about Anthea’s next big project - local water storage - in this PattersonIrrigator.com article.