More Almonds Does Not Equal More Water for Agriculture 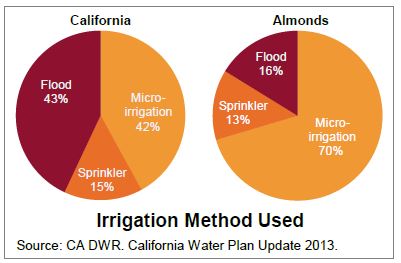 As California suffers through a historic drought, many in our state have looked at the acres of almond orchards throughout the Central Valley and assumed that the rapid growth in our industry has contributed to the state’s woes. With headlines like “It takes 1 gallon of water to grow an almond,” it seems easy to conclude that a shift towards higher value crops like nuts has led to a rapid increase in the amount of the state’s water devoted to agriculture.

Historical data, however, clearly indicates this is not the case. According to the California Department of Water Resources, the total amount of agricultural water has held steady since 2000 and actually declined over a longer period.1

There a couple of reasons that we’ve been able to hold the line on agricultural water usage. 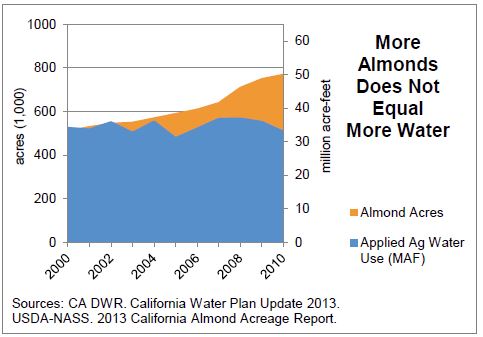 Almonds are using existing farmland - Since 2000, almond acreage has increased 67%.2 That growth, however, is not driving an overall growth in irrigated farmland. According to the Public Policy Institute of California, the amount of irrigated farmland has remained relatively flat since 1967.3 In general, almonds are replacing other less valuable crops and are using water that was already allocated to farming.

Almonds aren’t a “thirsty” crop - Despite sensational headlines, the water used to grow almonds is in line with the per-acre needs of many other California crops. Overall, almonds grow on less than 13 percent of California’s total irrigated farmland but use only nine percent of the state’s agricultural (not total) water.5 You can see in the chart to the left that fruits and nuts use approximately 2.2 acre-feet of water (a typical measure of water used in farming). With that water, almond growers produce three products – the almond kernel we love to eat; the almond shell, which is used for livestock bedding and alternative energy; and the almond hull, which is sold as livestock feed, reducing the need to grow other feed crops. Not a bad return for that water investment.

At the Almond Board, we are proud our track record when it comes to sustainability. Thanks Almond Board-funded research, we’ve helped growers reduce the amount of water it takes to grow a pound of almonds by 33 percent over the past two decades.6 We continue to work to find solutions that increase water efficiency while producing high value crops that help feed California and the world.