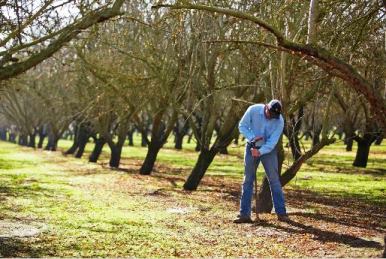 For almond growers, responsible stewardship of the environment is an everyday consideration, but since today is Earth Day, it’s a chance to step back and reflect a bit on where we are today and where we’re going. With California in the midst of a devastating drought, we’re putting a special focus on our efforts to conserve water this year.

If you’ve been following the blog in recent months you’ve probably heard us say that we’ve used decades of research to reduce the amount water it takes to grow a pound of almonds by 33 percent over the past twenty years, and that 70 percent of almond growers use micro-irrigation, which is significantly higher than state and national averages.[1],[2] Those facts represent important progress and are a testament to the stock that almond growers put into scientific research, but it’s not an excuse to rest on our laurels. We’re committed to continue building on that progress, and we have a variety of research projects underway to get us there.

Each of our research projects is a multi-year commitment and the findings are routinely adopted widely throughout the industry. The research itself takes place at highly respected universities, often at schools that are part of the University of California system. Here’s a brief look at just a few of the areas we’re working on right now:

First – we think it’s important to have a truly accurate picture of how much water California almonds are using. There have been studies about the water footprints of various crops and products, including almonds. But to date, none of those studies have reflected the specific growing conditions in California, or the efficiency gains we have made in recent years. Nor have they accounted for the fact that almond hulls are actually a separate, second product with their own value. Those hulls are sold as livestock feed, reducing the amount of water that would otherwise be needed to grow feed crops like hay.

We’re developing regional crop evapotranspiration coefficients, which is basically a fancy way of saying we want to know more about regional differences that affect the amount of water an almond tree needs. That will help growers better calculate the water demand for trees in their specific area and maximize water efficiency.

Along the same lines of giving growers more tools to meet each farm’s unique needs, we’re working on designing new remotely controlled irrigation systems that are tailored to match in-orchard water demand variability. This means that irrigation systems of the future can be better customized to specific irrigation zones defined by slight environmental differences within the orchard. By even more precisely targeting water to trees, we can make the same amount of water go further toward growing almonds.

And because all of California’s water recipients – from farmers to city dwellers to wildlife and fish – know how scarce and precious this resource is, a priority of our research on different varieties of rootstock is finding those that are tolerant of lower quality water. Through this long term research, water too salty for drinking or other uses may someday be useable for almond orchards – leaving more pristine water for other uses.

That’s just a sampling of what we’re working on right now, and we undertake new projects each year.  In fact, in the coming months, we’ll be announcing our next slate of research projects, so stay tuned.