Guangwei has worked at the Almond Board of California since 2001 in various roles, most recently as Associate Director, Food Research and Technology. He directs and manages research in almond quality, safety and processing technology, co-product utilization, harvesting technologies, etc., and he conducts trade education events and food professional outreach activities. Guangwei had played an instrumental role in development of the almond mandatory pasteurization rule. The thermal lethality and surrogate microbial challenge validation guidelines that he developed for existing almond processes and new pasteurization processes based on the findings from extensive research are now widely followed by other nut and low moisture food industries. Presently, he is spending more time in finding more value-added options for almond coproducts including almond hulls, shells, and woody biomass, and better solutions to reduce dust during almond harvest.

Before joining ABC in 2001, Guangwei worked for companies in business of dried fruits and nuts, Mexico frozen foods, organic baby foods and almond processing in California. He had also spent about seven years with the China National Center for Food Safety Risk Assessment to develop national methods and standards for pesticide residues and contaminants in foods before coming to California in 1990.

Guangwei obtained a B.S. degree in sanitary inspection and technology in 1983 from Sichuan University, and M.S. degree in Food Science from University of California, Davis in 1993.

Send to all affiliates
Off
Image (540x960 Recommended)
Image 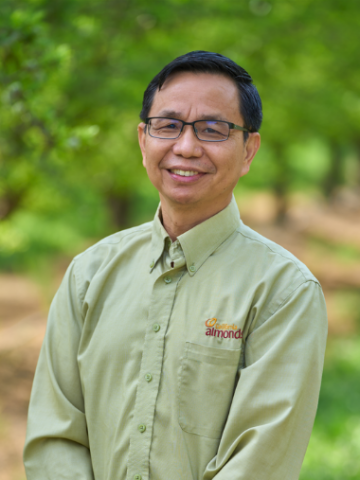