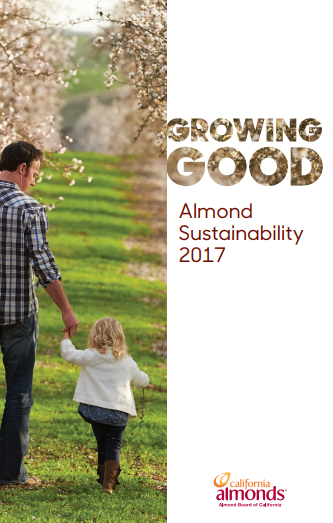 Explore the almond community's heritage of sustainability in the Growing Good | Almond Sustainability 2017 publication.In addition to providing a safe and stable supply of almonds, California's community of more than 6,800 almond farmers is committed to using sustainable agricultural practices that are economically viable and based upon scientific research, common sense and a respect for the environment, neighbors and employees. The result is a plentiful, nutritious, and safe food product.1

Almond Board of California (ABC) has been investing in research since 1973 and, to continue to help farmers navigate complex challenges, this year ABC invested $4.8 million in research projects exploring next-generation farming and sustainability practices. These research projects cover a range of sustainable topics including irrigation efficiency, air quality and honey bee health, providing the foundation for increased understanding and improved practices.

When it comes to following sustainable agricultural practices, California Almond farmers and processors are progressive and continuously challenging themselves to do more. The California Almond Sustainability Program was established in 2009 in part to better understand the ongoing sustainability improvements of farmers across all production practices and to provide continuing education on these topics.

To date, nearly 23 percent of California's almonds acreage is represented by completed assessments.

Read more about our commitment to sustainability and continuous improvement in the Growing Good | Almond Sustainability 2017 publication. 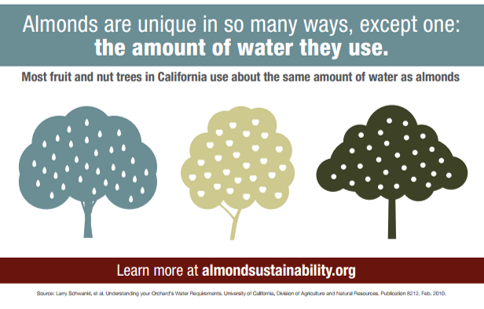 All food takes water to grow and produce. So efficient water use and irrigation management have always been high priorities for California's almond farmers. In fact, innovative farming and production developments over the past two decades have reduced the amount of water needed to grow a pound of almonds by 33%.2

How have they done it' Research shows that: 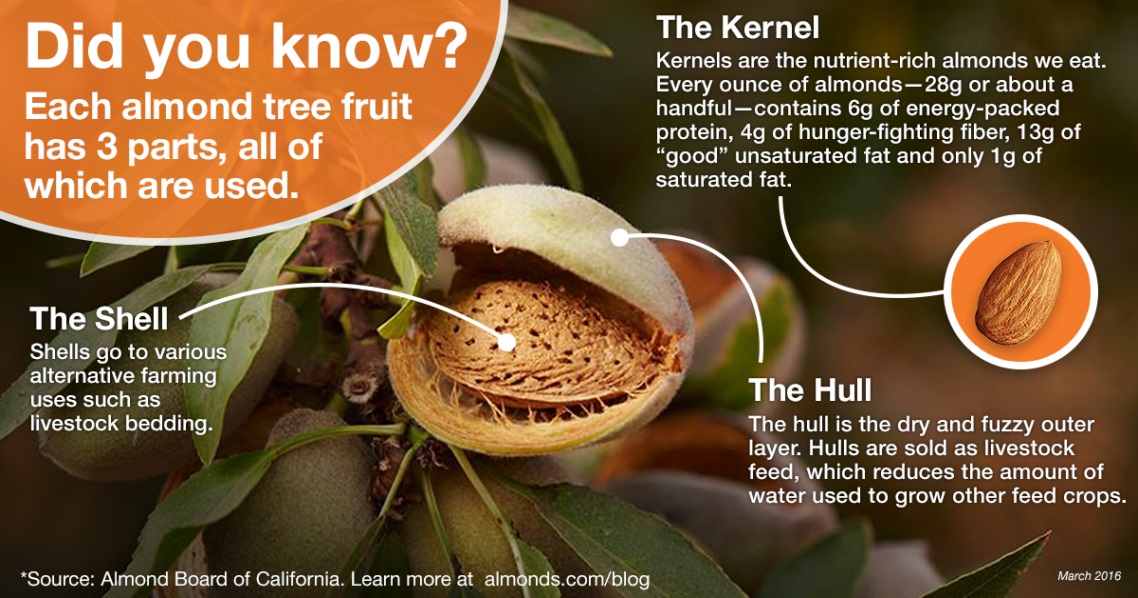 Did you know that almond trees grow multiple products? In addition to the kernel that we eat, almond coproducts include the almond hull, which is used to feed livestock, and the shells, which are used as livestock bedding. Even the trees are utilized at the end of their productive lives, creating alternative energy or being used to improve soil quality.

Almonds are not sold with waste products like skins, pits and shells. This means that the industry, not the end user, is responsible for and able to take advantage of high value, beneficial, uses of the hulls, shells, and woody material, rather than sending them to a landfill.

In addition to these traditional uses, ABC is focusing research investment on innovative new uses for these coproducts including manufacturing needs across food, automotive, pharmaceutical and plastics.

In addition to the continuous improvement of almond farming and production practices, California's almond orchards provide inherent benefits as found in almond Life Cycle Assessment (LCA) research from UC Davis. This study demonstrated that California's 130 million almond trees6 accumulate and store significant amounts of carbon dioxide, a potent greenhouse gas, during their 25-year life cycles, and the utilization of almond coproducts is key to reducing carbon emissions and environmental impact.

Should production advances and policy changes work hand in hand, the California Almond community could become carbon neutral or even carbon negative. At present, 50 percent of the industry's carbon emissions are offset by the trees' inherent carbon storage and current farming practices.7

Within the larger context of food, researcher Dr. Alissa Kendall states, "California almonds have a lower carbon footprint than many other nutrient-dense foods."

California is one of the few places on earth with the Mediterranean climate necessary for growing almonds. Others with suitable climates include the area around the Mediterranean Sea, Australia, South Africa and Chile.

The climate, coupled with California's rich soils, water availability and infrastructure, innovative technology, and research opportunities make it the most productive almond growing region in the world. In fact, California grows more than 50 percent of the nation's fruits, nuts, and vegetables. 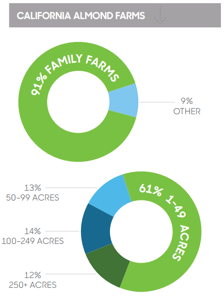 Because of these ideal conditions, California produces more than 80% of the world's almond supply and accounts for 99% of domestic supply.8 This creates a comparative advantage, which in turn creates economic value not just for farmers but for California as a whole. According to a study by the University of California Agricultural Issues Center, the California almond industry as a whole generates about 104,000 jobs statewide.

To put that into perspective, that's about as many people as General Motors employs throughout all of North America. These jobs are generated across multiple industries resulting in more than $21 billion of gross revenue in California and adding about $11 billion dollars to the size of the state's total economy.9

Farming for the Future

Over 90% of California almond farms are family farms, many owned and operated by third- and fourth-generation family farmers who live on the land and plan to pass it down to their children.10 Almond farmers recognize the need to carefully manage resources for current and future generations, and offer continued work for their employees while protecting their families, neighbors local communities and the environment.