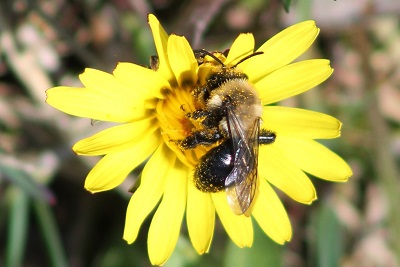 SACRAMENTO – A broad array of organizations from across California’s agricultural and environmental landscape announced a working coalition to address their shared commitment to the health of wild and managed pollinators. The Coalition is focusing on increasing the value working lands provide to our environment, to benefit biodiversity and farmers alike.

The California Pollinator Coalition, convened by Pollinator Partnership, the California Department of Food and Agriculture and the Almond Board of California, includes more than twenty organizations – representing the large majority of California’s crop and range land – pledging to increase habitat for pollinators on working lands. Together, the goal is to increase collaboration between agriculture and conservation groups for the benefit of biodiversity and food production. The result will be on-the-ground improvements, technical guidance, funded research, documentation of relevant case studies, and tracked progress toward increasing healthier pollinator habitats.

Achieving this bee friendly goal is laden with benefits for farmers and the environment in California, increasing biodiversity and sequestering more carbon in the soil. The Coalition also hopes their success will serve as a model for even more collaboration among interests who have not always been aligned, but who are willing to come together in partnership to confront common challenges.

“What we are doing in California is acknowledging the urgency to address the critical issue of protecting all pollinators, including native and managed species,” said Laurie Davies Adams, President and CEO of Pollinator Partnership. “Agriculture and conservation must work together to achieve this goal, especially when we will be facing many of the same issues – increasing temperatures, erratic and unpredictable weather, fires, drought, soil depletion, and more. The outcome will not be a tidy report that sits on a shelf, but rather a metric of acres, projects, and species added to the landscape while agriculture continues to profitably feed the nation.”

The collective land represented by coalition members will provide the critical mass to address habitat on an unprecedented scale, for the benefit of beneficial insects, such as bees, butterflies, beetles, wasps, moths and more.

California is home to more than 1,600 native bees and hundreds of other species of pollinating insects. Globally, pollinators provide service to more than 180,000 different plant species, more than 1,200 crops, and are responsible for producing an estimated one out of every three bites of food. They sustain our ecosystems and support natural resources, all while adding $217 billion to the global economy each year. But pollinator populations are declining and often suffer from the same challenges as California’s agriculture.

The Coalition will work together on a variety of fronts to support pollinators:

“Collaborative action can mitigate risks to California’s pollinators, and that’s exactly why this coalition has come together,” said Karen Ross, Secretary of California Department of Food and Agriculture. “We need urgent action, yet the first step in the process is building trust that encourages, enables, and enhances the result. The California Pollinator Coalition is a big step forward in a journey of grower and conservation groups voluntarily demonstrating leadership.”

“This will not be an easy or quick fix,” said Josette Lewis, Chief Scientific Officer of the Almond Board of California. “It will require a robust and sustained effort, but we are determined to be part of the solution. Almond growers and many other farmers depend on pollinators to produce a crop and pollinators depend on us to provide safe habitat. Working lands can and should be part of the solution.”

“Farm Bureau supports voluntary, farmer-friendly efforts to improve habitat for native pollinators, and we have long advocated improved research on pollinator health,” said Jamie Johansson, President of the California Farm Bureau. “We will work with the coalition for the benefit of native pollinators and managed bees, and to assure stability for the domestic bee business.”

“Climate change will affect the wildlife of California and the way we grow food in many ways,” said Dan Kaiser, director of conservation at Environmental Defense Fund. “The best chance for biodiversity and farms to thrive is to rebuild the natural infrastructure that supports pollinators, soil health and water resilience throughout the Central Valley. This coalition will promote robust research and guidance to support a more resilient and biodiverse agricultural landscape.”

While just beginning its work, the Coalition is catalyzing new collaborations and continuing to recruit partners who understand the urgency and share the common goal of supporting both the health of pollinators and agriculture. Current California Pollinator Coalition membership includes:

About the California Pollinator Coalition

The California Pollinator Coalition, convened by Pollinator Partnership, the California Department of Food and Agriculture and the Almond Board of California, is made up of a diverse group of agricultural and conservation organizations with the shared goal of providing enhanced habitat for pollinators. The Coalition and its members have pledged to increase habitat for pollinators on working lands. Additionally, the group plans to promote research and track its progress toward healthy and abundant habitats.