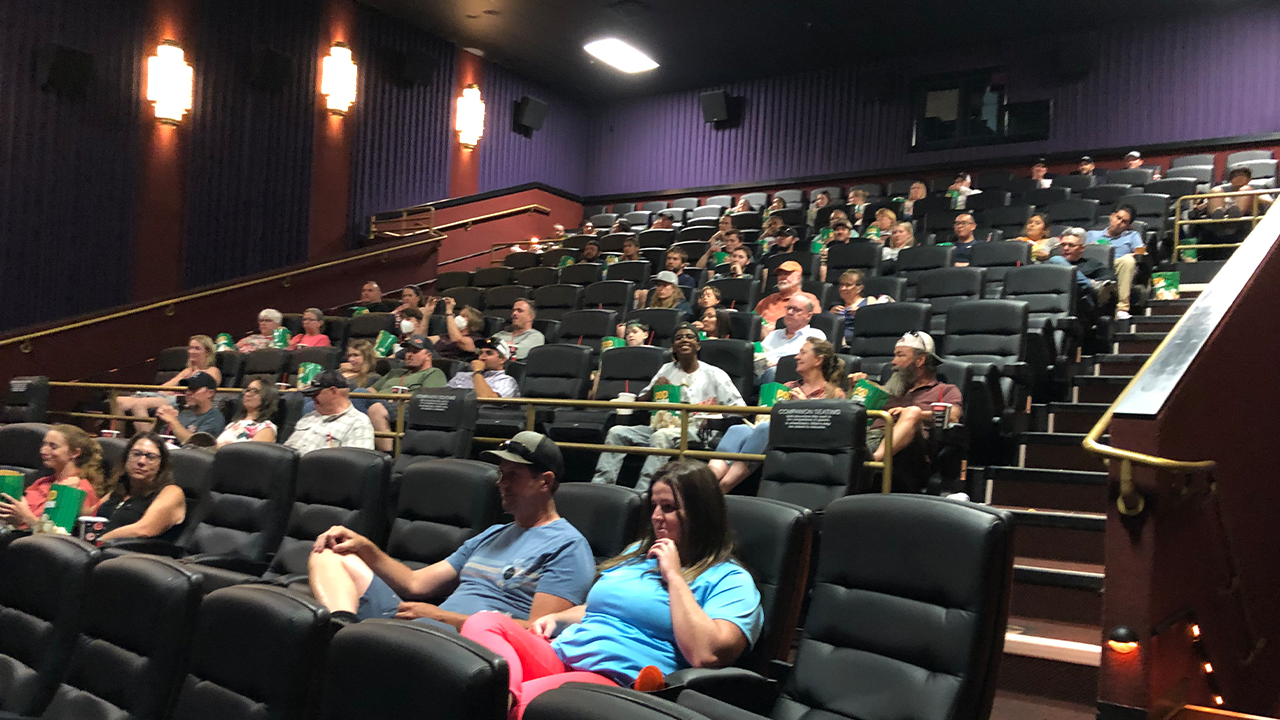 Industry members gather for the Thor: Love and Thunder movie screening in Chico.

The Almond Board is wrapping up FY 2021/22 with a bang by capitalizing on the broad appeal of Marvel Studios and its iconic Thor franchise.  In June of 2022, the Almond Board started running ads in five key almond-loving countries – the United States, the United Kingdom, Mexico, Italy and India to promote both California almonds and the new movie Thor: Love and Thunder. To learn more about the partnership click here.

To celebrate this monumental partnership and the release of the movie, Marvel and the Almond Board hosted three private corporate screenings July 7-9 in Chico, Modesto and Fresno. More than 250 people associated with the almond industry were able to watch the movie as well as the Thor-themed almond commercials from the five countries.

The five regional ads, showcasing California almonds and Thor’s weapons were shown before the movie began. Each unique spot builds upon the marketing efforts already in place in the targeted countries. To view each spot, visit our campaign landing page that features more background on the partnership click here.

What people had to say

“I think it’s cool,” said Ian Darling of the ABC/Marvel partnership. He is a sales rep for Monte Vista Farming Co. in Denair and saw the movie in Modesto with his girlfriend, Ashley.

“I think marketing with a movie is a great idea to reach a more global audience,” said Chris Taylor, an almond grower in Glenn County who attended the Chico premiere with his wife, Christine, and another friend. “I don’t know much about the series, but this is a great start!”

“The advertising creative taps into our local campaign storylines in each of these five markets, while enabling us to further our message – seamlessly – across both our audiences and the huge Marvel fan base,” Williams explained. “Again, a win-win, and why partnerships like this one make good sense.”

“They all had a different flair and style,” said Jared Smith, sales and marketing manager for Fisher Nut Co. who attended the Modesto event with his 4-year-old son, Landon. “My personal preference was the U.K. one. It’s fun and lively. … My son laughed at the U.S. one, which I thought was funny.”

Everyone agreed that almond industry should be proud of its connection with a company with the prestige of Marvel.

“Many people are obsessed with Marvel and the superhero theme in all their movies goes well with promoting California almonds. It seems like a great partnership,” said Jonnalee Dunn, an almond grower in Modesto who works for Henderson Farms. She attended the event with her husband, Mike, and 14-year-old daughter, Ailana.

The campaigns will take place from May 31 to July 31, 2022. If you haven’t had a chance to see any of the new ads – or want to see them again – you can view them online at Almonds.com/ThorLoveandThunder.