The introduction of new almond varieties is one important way that the industry can continue to meet many of its key challenges. 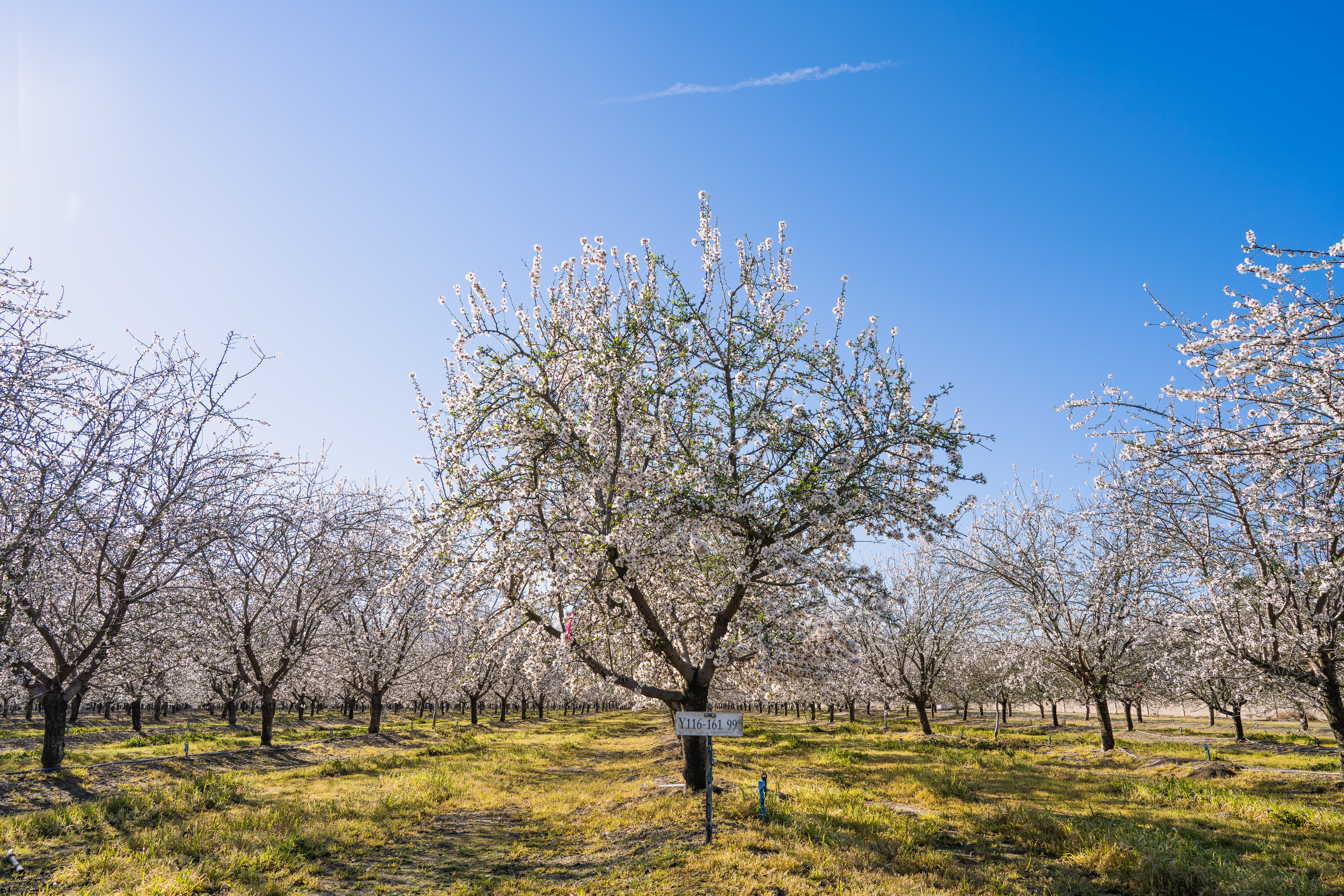 In the 1970s, the Almond Board of California began supporting Regional Variety Trials (RVTs) to provide a mechanism to test the performance of new varieties across the diverse almond growing regions in the State of California and to extend that information to local growers. Previous and current RVTs have been designed to evaluate new varieties or selections in a semi-commercial (20 to 40 trees per variety) manner and compare them to standard varieties such as Nonpareil, Mission, and currently accepted pollinizer varieties.

One of the main outputs of the first two generations of RVTs was to fully document the performance of the top 14 out of 15 varieties most currently adopted in California. These first two RVTs identified good pollinizers for Nonpareil, collected key horticulture and almond quality data, and discarded many undesirable pollinizers before they were widely adopted.

The third, and current generation of RVTs started in 2014 and is already in the process of identifying top performers. For instance, the USDA breeder recently released selection Y116-161-99, as the new variety ‘Yorizane’ variety due to the consistent novelties of the variety, including self-fertility, high yields and good kernel quality recorded in the current RVT. The current RVT brings key novelties in comparison to the previous generations such as the fact that all the trees were planted in the same year (2014), in multiple locations (Butte, Stanislaus & Madera Counties) and with statistical repetitions.

For nearly 50 years the Almond Board has partnered with the University of California (UC) to conduct Regional Variety Trails (RVTs) that provide a mechanism by which ABC, researchers and industry members can evaluate new varieties across the diverse almond-growing regions in the state.

Due to the contribution of these RVTs, our industry has been able to adopt a wide range of varieties that offer a versatile supply of almond kernel and confer competitive advantage to growing almonds in California. Thanks to the outputs of these RVTs, our industry counts on multiple pollen compatible varieties (i.e. Fritz, Price, Aldrich, Wood Colony, Monterey, etc) that adequately cover Nonpareil bloom. The RVTs have identified varieties that are more resistant to pests and diseases such as NOW (i.e. Price and Butte) and Hull Rot (i.e. Monterey, Carmel, and Fritz), respectively. RVT outputs have expanded our harvesting and processing operations by identifying the Sonora group (harvested 7-13 days after Nonpareil), the Price group (harvested 15-21 days after Nonpareil), and the Carmel group (harvested 29-34 days after Nonpareil), among others. Also, the data collection in these RVTs have served to group varieties by their ease of nut removal (i.e. Butte, and Price fall in the easy category while Merced falls in the difficult category), hull split date, vigor, etc.

This investment in varietal research has resulted in the commercialization of new UC varieties in the past 20 years such as: Kester, Sonora, Sweetheart and Winters. And thanks to the RVTs and the ongoing collaboration with the USDA breeder Craig Ledbetter, we can now add Yorizane – another self-compatible variety with many intriguing characteristics -- to the mix. It is the latest example of ABC research and collaboration with the UC coming to fruition, with many other new varietals potentially still in the pipeline from the current RVT.

At The Almond Conference (TAC) 2020 breakout session in December, ABC Associate Director of Agricultural Research Sebastian Saa told growers that evaluating more self-compatible varieties like Yorizane remains a priority. Self-compatible varieties potentially require fewer pollinators in the orchard because the pollen only has to move a short distance – from one blossom to another blossom of the same tree – rather than from one blossom to another blossom a tree row or more away.

There are other advantages, Saa said: “Self-compatible trees can be grown in blocks of the same variety, allowing for more efficiency at harvest time. ‘One shake, one harvest,’” he said.

Many of the most recent new varieties created in California and around the world are also are self-compatible. Saa said that CA new varieties typically bloom about the same time as Nonpareil but are harvested a couple of weeks later and therefore could be viable options for growers seeking to transition to off-ground harvesting.

During the online discussion at the breakout session, a grower asked Saa if there is an increased risk of resiliency to diseases or pests with self-compatible varieties, especially if there is less genetic diversity within an orchard.

“If we adopt one self-compatible variety, then there is a potential risk,” Saa acknowledged, “but if we adopt multiple self-compatible varieties from different genetic background, then the risk remains low, and our resilience is improved. Our goal is to enhance variety diversification for the California almond industry by adopting better almond varieties that respond to different market demands as well as provide enhanced traits such as self-compatibility.”

In addition to learnings around self-compatible varieties, TAC attendees also had an opportunity to hear from Phoebe Gordon, a UC Cooperative Extension orchard crops farm advisor in Merced County. Gordon manages one of the RVT sites in Madera County (others are located in Butte and Stanislaus counties). Since 2017, she and her peers have tested various pollinator varieties paired with alternating rows of Nonpareil trees.

She said early results in the RVT indicate that some of the pollinator varieties may have higher yields than Nonpareil, but cautioned that “we need to look at entire lifespan of these varieties.”

Developing a new variety can take many years, if not decades. Craig Ledbetter, a research geneticist with the Agricultural Research Service, based at the San Joaquin Valley Agricultural Sciences Center in Parlier, was directly involved with the development of Yorizane.

He said the first seedling was planted in 1999. Its kernel attractiveness and ease of cracking – combined with self-fertilization -- quickly separated it from other alternatives, Ledbetter said. Annual tests on roller crackers also showed its kernels damage less often than Nonpareil. Then, the RVT that began in 2014 revealed Yorizane’s heavy yield potential.

“Yorizane provides a varietal option to growers to establish a more efficient single-variety orchard,” Ledbetter explained. “As a part of the RVT, it has been evaluated in blind tests by industry personnel for kernel attributes and has been found to have excellent kernel appearance and marketing potential.”

Limited quantities of Yorizane already are available at many of California’s leading tree nurseries.

Yorizane is just one example of the ongoing value and importance of the Almond Board’s long-term investment in research, development and real-word, in-the-orchard testing of new varietals. It is a critical partnership between the industry and the U.S. Department of Agriculture’s Agricultural Research Service (USDA/ARS), the University of California system, and private breeders and nurseries in California.

Chuck Fleck, director of horticulture research at Sierra Gold Nurseries near Yuba City, said there are many other exciting scientific advances on the horizon. Although Sierra Gold’s variety development program is relatively young, he said its team plans to eventually release almond varieties and rootstocks that provide growers with many advantageous genetic characteristics.

Fleck pointed to the work of two researchers – Malli Aradhya of the USDA and Tom Gradziel of UC Davis – as being especially promising. Aradhya’s has focused on helping growers overcome abiotic (atmosphere, chemical elements, sunlight/temperature, wind and water) as well as biotic (soil, floom, leaves and wood) challenges in their orchards. Gradziel is working to bring new germplasm into almonds’ fairly narrow genetic base as well as exploring alternative rootstock options to more effectively deal with abiotic and biotic issues.

“Perennial crop breeding takes years to see successes and breakthroughs,” Fleck explained. “Because it can take decades before such successes come to light, the resulting varieties -- and therefore the breeding program’s true value -- is not easily discerned until long after their inception.”

It hasn’t always been easy to efficiently communicate breakthroughs in the genetic world or promising results from RVTs to growers. That’s why so many industry officials are excited about the rollout of varietal fact sheets co-created by the Almond Board, UC-ANR, and the Fruit and Nut Center (FNC) at UC Davis.. These factsheets  are housed on a new website that will launch later this year at the FNC center. The first fact sheet debuted is on Yorizane and can be viewed here.

“The data that is being generated is important and frequently actionable, but to date there has not been a particularly convenient way to access the results from these research projects,” said Julia Stover-Blackburn, director of Fruit and Nut Center. “ABC and UC-ANR do a great job of communicating findings at The Almond Conference and other meetings throughout the year, but we anticipate that making these results findable in the same place will help extend the reach.”

She said the website will have an overview of various almond-breeding resources but primarily will serve as a repository for the findings of the most recent Regional Variety Trial. A second site is under construction to serve as a repository for almond rootstock trial findings. The hope, Stover-Blackburn explained, is that the sites “will be a resource for both researchers and growers looking to see how various varieties and rootstocks compare in these extensive trials.”

The importance of RVTs cannot be overstated. Saa said 14 of the 15 most popular almond varieties in California are the product of trials. Initiation is already under way for the next RVT, which Saa expects to plant on the ground late in 2022 or early in 2023 and continue for a decade or more. He said the next trial likely will include many novelties in comparison to the current regional trial and that ABC is already working to identify the ad hoc research team.

“Having third-party data collection about how that variety performs in different regions of the state is very valuable to growers, nurseries and handlers,” Saa said. “We need to know the weaknesses and strengths of varieties. There is no perfect variety. Some growers are looking for different things, like harvest times or kernel characteristics. There is no doubt that we need a diverse supply of almonds varieties.”

Gordon said RVTs allow horticultural characteristics like yield, bloom overlap and harvest timing to be compared in an unbiased setting.

“If there are conditions that are conducive to disease development, they can also be a way to compare relative susceptibilities to diseases,” she said. “They also allow growers and PCAs to see new varieties in person before committing.”

Industry members interested to learn more about ongoing research should stay tuned for a report that will be issued this spring summarizing the RVT data collected in the past four years.

In addition, industry members are encouraged to check out this session from The Almond Conference 2020 during which Gordon and other experts provide information on the latest varieties and selections under evaluation, in addition to discussing ABC’s overall breeding strategy.

Finally, in 2020, the Almond Board published a comprehensive breeding report that provides an evaluation of national and international varieties and selections currently under evaluation or available in the market. Those interested in sinking their teeth into this topic are welcome to review this report.

Topics: About the Almond Board, Orchard Management