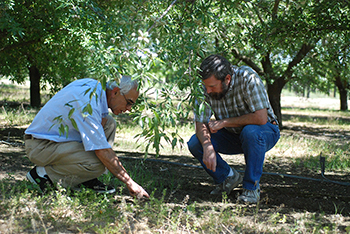 (May 15, 2020) – Each year, one of the biggest threats to growers’ almond crop is Navel Orangeworm (NOW). This pernicious pest can wreak havoc on California almonds in various ways and at various times throughout the crop year, though perhaps one of its worse offenses is its potential to instigate the inception of aflatoxin by way of a carcinogenic contaminant produced by the fungi Aspergillus flavus or A. parasiticus.

The combination of NOW and aflatoxin in any orchard is a nightmare for growers as well as handlers. Yields and therefore profits can drop significantly, and nuts exceeding countries’ accepted limits for aflatoxin levels can be rejected at ports across the globe, costing handlers thousands of dollars to ship loads back to the U.S. for resampling.

The Almond Board of California (ABC) has been funding NOW research since 1973, and the California almond industry, with support the University of California Cooperative Extension (UCCE), has taken extensive measures to support pre- and post-harvest research to combat Aspergillus mold and, subsequently, aflatoxin. In fact, NOW is one of five pests the industry will focus on reducing (and, ultimately, eradicating) as part of its Almond Orchard 2025 Goal to increase environmentally friendly pest management tools by 25%.

Currently, one of the most promising ongoing projects is being led by Themis Michailides, Ph.D., a plant pathologist at the UC Davis Kearney Agricultural Research and Extension Center in Parlier. Michailides and his team are studying AF36 Prevail®, a product has been used successfully to treat pistachio orchards since 2012 and is available through both Western Milling and Agri Systems, Inc. in California.

Fortunately for growers, the research’s initial results are enough to keep nightmares at bay.

AF36 is a naturally occurring strain of Aspergillus mold that does not produce aflatoxin, making it “atoxigenic.”

“The production of zillions of AF36’s atoxigenic spores can displace the spores of the native toxigenic Aspergillus flavus strains in the field and thus reduce the risk of aflatoxin contamination on a grower’s crop,” Michailides explained.

The best time to apply AF36 is about two weeks before hullsplit, usually in mid-July, to ensure maximum sporulation of the biocontrol during the hullsplit stage. It should be applied to the orchard floor at 10 pounds per acre, after which growers should irrigate their orchards to activate the fungus and encourage optimal sporulation. AF36 should only be spread where water will reach it, Michailides said.

Research suggests AF36 is more effective when used year after year, as it helps build up the population of the atoxigenic AF36 strain in the soil. Michailides said it is likely the effect would diminish over time if annual applications ceased.

“For pistachios, we know it needs to be applied each year,” he said. “In almonds, research shows that, if in the first year it’s applied it reaches very high levels, it can survive for a second year in high levels similar to those of the first year. However, we did not repeat the study and thus we do not know if this initial research can justify application in almonds every other year.”

Expanding on learnings from pistachios

The results of Michailides’ nearly eight years of AF36 research in pistachios are impressive. In the past two years alone, roughly 400,000 acres of California pistachios have been treated, and in many years aflatoxin levels were reduced by 40% to 50% - 2015 even experienced an 80% reduction, according to Michailides.

The Environmental Protection Agency (EPA) approved the use of AF36 in almond orchards in 2017, but by the time the agency’s announcement was made it was too late in the season to be applied. Still, in Michailides’ last two years of AF36 research in almonds, some test orchards have seen the amount of toxic Aspergillus fungus drop by as much as 90% in the soil.

In 2019, when more almond growers became aware of AF36 and its effectiveness, some were unable to purchase it in time for application before hullsplit. As such, Michailides and industry officials encourage growers to plan ahead if they want to apply AF36 this summer.

Although Prevail® is the only AF36 product currently registered by the EPA, another biological control currently on the market for aflatoxin control is Afla-Guard GR, created by Syngenta. This product uses barley instead of sorghum (as is used by Prevail®) as the sterile seed carrier for the fungus and appears to sporulate better under drier and cooler conditions. It has been registered for use with peanuts and corn, and Michailides and researcher Dr. Ramon Jaime expect it could be approved for use on almonds, figs and pistachios by 2021.

Meanwhile, Michailides is continuing several research projects, partially funded by the Almond Board, to further establish the efficacy of AF36.

“My ultimate goal is for almond growers to adopt this method of aflatoxin control as well as the pistachio growers have,” he said.

Still, Michailides emphasized that AF36 should not be viewed as a substitute for a year-round integrated pest management program. Because NOW is such a threatening pest, effective treatment requires multiple inter-related, year-round efforts, from winter sanitation and orchard removal of mummy nuts that may harbor NOW larvae to mating disruption in the spring and summer to pesticide applications made, as needed, throughout the year.

“The first, most important element of NOW control is still winter sanitation,” he said.

For more information on proper application of AF36, check out “AF36, Biocontrol Agency for Aflatoxins, Now Approved for Almonds.”