Brian Ezell is a self-described “data guy.” He likes numbers and spreadsheets and analytics – all the things that allow him make decisions based on fact, not emotion. As the chairman of the Almond Board’s Global Market Development Committee (GMDC) for the past six years, Ezell uses that logical mindset to frame every discussion.

“Not only does he bring that perspective of what’s happening in the industry to help us think about where the smartest places are for us to make investments, he also is so balanced in his approach,” praised Emily Fleischmann, the Almond Board’s vice president of global market development. “Being the head of the GMDC, the chair, is a very difficult job. You’ve got a lot of voices, a lot of opinions, and he does an amazing job of making sure everybody’s heard. … So, at the end of our meetings when he’s making comments or pushing us toward final decisions, there’s a really good thoughtfulness and grounding that he brings to things.”

Ezell also has served on other important ABC committees in the past 20 years, all as part of his effort to help the industry sustainably and responsibly increase production to meet growing demand around the world. In his “day” job, he is the vice president of the almond division for Wonderful Pistachios and Almonds, a company Ezell has been with for more than 30 years. 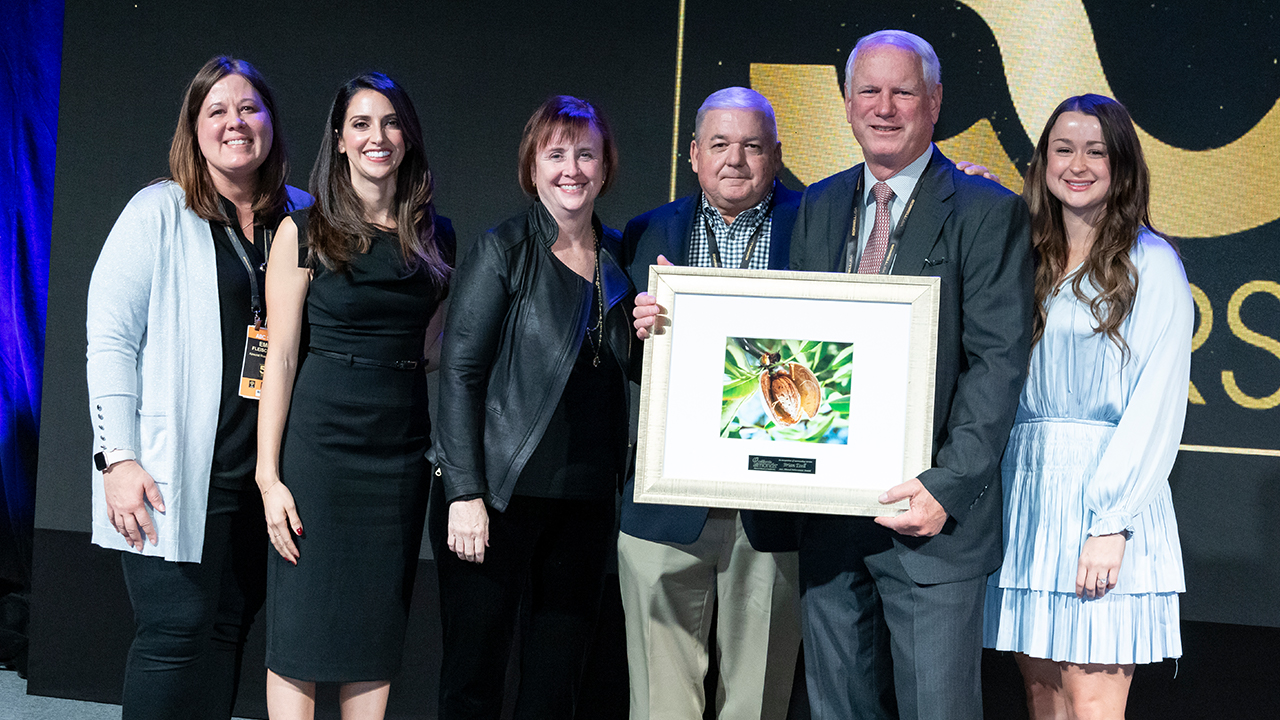 For his many contributions to the industry, Ezell was honored with the Almond Achievement Award at the 2022 Almond Conference in Sacramento.

Ezell called the award “a blessing and a huge surprise.” Conference officials arranged for his wife, Cheri, and daughter, Kathleen, to attend the announcement without Ezell’s knowledge, along with many of his co-workers.

“When you get an award like this, you feel very humbled because you feel like you’re the one who got all the benefits,” he said. “And, of course, there’s other many other hard-working industry members who volunteered just as much time on just as many committees, so it’s like, ‘How’d you pick me?’ because I can give you a list of 10 other people that I’d put ahead of me.”

Ezell went to work for Wonderful in the 1980s when it was still known as Paramount Farms. He began as a financial analyst, transitioned to an operations analyst, worked with the pistachio team for three years, and then moved to sales and marketing. In 2001, he took over sales and marketing for the almond division as the company’s acreage expanded.

Despite the often-unpredictable nature of agriculture, Ezell has retained his data-driven approach.

“When you have agricultural crops, every year brings something different. Whether it’s a quality issue, nut size is smaller or bigger, it’s a high insect year or something else, we have to change our plans or change our strategy,” he said. “We can be going right into a month from harvest thinking one thing and once harvest starts you realize it’s something totally different. Your yields are much less than what the farmers thought, your insects are higher. For me, it’s like waking up to a chess game every day and you’re just trying to win the game. It changes, but that’s what I think makes it exciting.”

Though Ezell modestly downplays his role within in the industry, Fleischmann said his impact has been significant.

“He is someone known to be analytical, and over time, many of those analyses have contributed to setting a standard for institutional reporting for the almond industry and this has instilled confidence in buyers worldwide,” she said. “But there is also a genuineness with Brian because he is just a good person and has a big heart. That sincerity especially shines when collaborating with him on tough decisions.”

Fleischmann credits Ezell for helping the GMDC make strategic budgetary choices after grower assessments were cut from 4 cents to 3 cents a few years ago. “He was instrumental in helping us navigate that process,” she said.

Ezell is a strong believer in volunteerism and happily continues to serve in whatever capacity is needed for not just the Almond Board, but other organizations as well.

“I really do encourage people in the almond industry, or any industry you’re in, to get involved and make sure you’re part of the solution and not just sitting on the sidelines hoping somebody else does it, because you will be blessed and you will get more out of it than you ever thought,” he said. “I don’t think a lot of people have the confidence to say, ‘I can make a difference,’ but the reality is that we can all make a difference. And you will learn more than you could ever dream just by being in the room with other peers, other people who have different life experiences, and the discussions, the things that go around, whatever you’re discussing, you will learn so much. It’s like getting a college master’s or Ph.D. over time.”