Another Dry Year Underscores the Value of Efficient Irrigation Systems 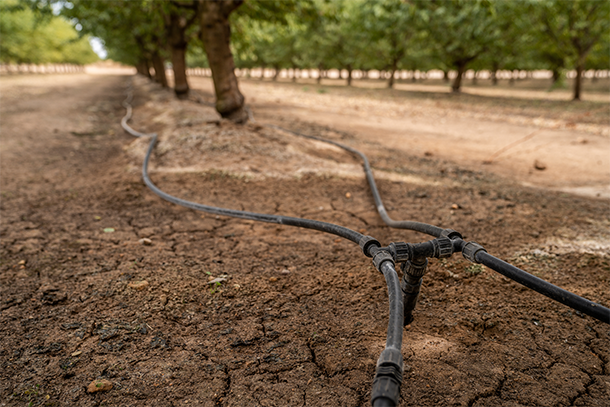 This growing season is shaping up to be another challenging one when it comes to water availability. After an above-average start to the rain and snow season, Mother Nature did not continue that trend.

The first two months of 2022 were the driest January and February on record in more than 100 years in the Sierra Nevada, reported by the Department of Water Resources (DWR), Snow Surveys and Water Supply Forecasting Unit. With most of the state’s major reservoirs already down significantly after back-to-back poor runoff years, the chances of them filling up this spring and summer are slim. This year’s snowpack is below average all across the Sierra.

Though so-called “March Miracles” have occasionally provided much-needed Sierra snow late in the storm season, the odds of one happening this year are not good. The March forecast from the Climate Prediction Center shows some regions in the Northern Sierra could receive more rain and snow than average. That possibility, however, is offset by the likelihood of lower-than-normal precipitation in the Central and Southern Sierra.

“Our team’s latest statewide snowmelt forecasts are only about 66 percent of average. That’s not enough to fill up our reservoirs,” Sean de Guzman, manager of the DWR’s Snow Surveys and Water Supply Forecasting Unit, told AgNet West. "Without any significant storms on the horizon, it’s safe to say that we will end this year dry and continue on into the third year of this ongoing drought.”

So, what does that prospect mean for almond growers?

Tom Devol, senior manager of field outreach and education for the Almond Board of California, said now more than ever it is critical that every drop of water is applied just as growers intend.

“It’s a pretty universal recommendation,” Devol said. “More than ever, it’s critical that growers are delivering water so every tree is getting the same amount, and doing everything possible to improve overall use and efficiency.”

Devol said there are a couple of important things growers can do now to ensure that their irrigation systems are performing at peak efficiency:

“It’s especially important this year to be looking for leaks in irrigation systems and repair them – riser tees, pump stations, air vents, flush valves and filter gaskets,” Devol said. “The overarching concept is a system that is losing water means growers are losing out on water being used for its most beneficial use.”

There is another important reason to check irrigation systems – nutrient management. With more and more growers injecting fertilizer into their drip systems, leaks, clogs and other problems prevent needed nutrients from getting to trees.

Devol will have more to say about irrigation system maintenance during the next Training Tuesday webinar, scheduled for March 15. Register for the Training Tuesday at Almonds.com to reserve your space.

ABC also has several other resources growers can access if they need help with their irrigation strategy this year: