Many almond growers have heard their peers, as well as others with interest in improving pollinator habitat and soil health, endorse the planting of cover crops to accomplish those goals.

Those same growers may have wondered if money spent on seeds and labor as well as the cost of time to manage cover crops truly pay off. Can the economic benefit of cover crops accurately be measured and, if so, what is the return on that investment (ROI)?

The Almond Board of California (ABC) – in an effort to directly address questions about the ROI of cover crops – recently completed a case study of one orchard in Stanislaus County where cover crops have been planted for a decade. The case study relied on a calculator system developed by the American Farmland Trust. 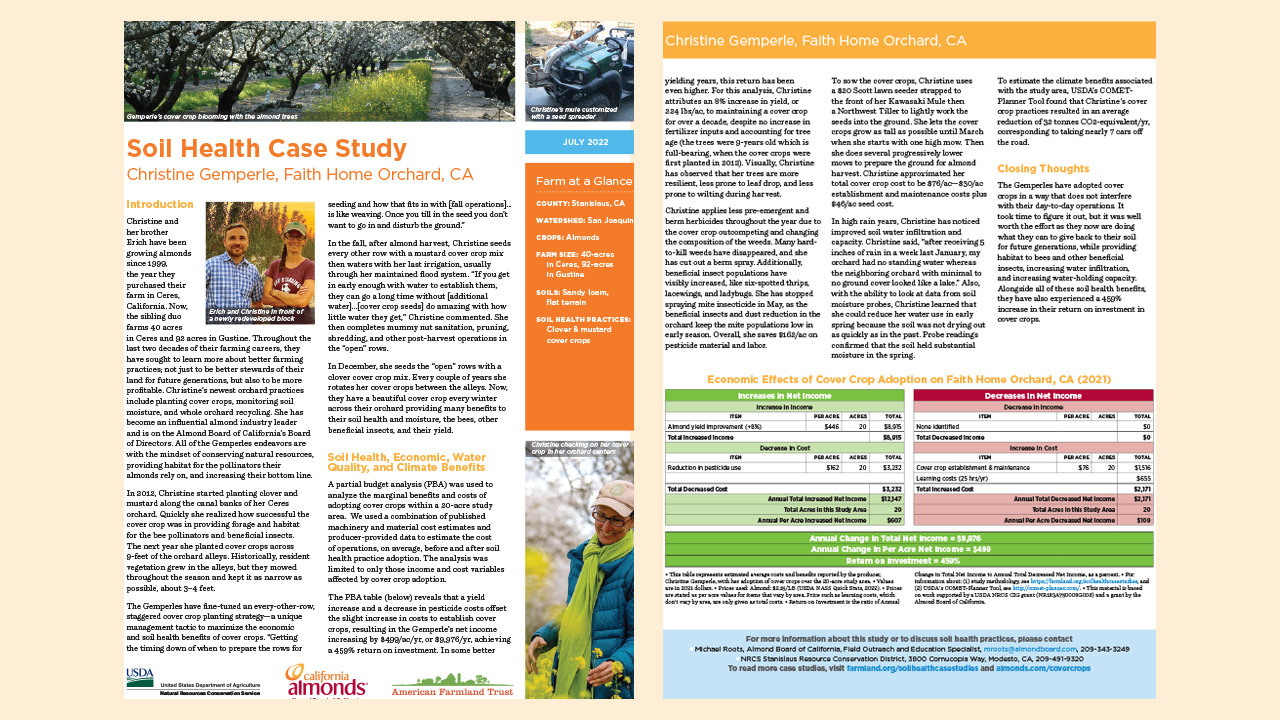 Michael Roots, ABC’s specialist for field outreach and education, worked with grower Christine Gemperle to evaluate the ROI of cover crops on 20 acres of her 40-acre orchard near Ceres. The result was an easy-to-read two-page document now available for other growers to review.

A combination of published machinery and material cost estimates and data supplied by Gemperle was used to estimate the cost of operations, on average, before and after cover crops were planted. The analysis was limited to only those income and cost variables affected by cover crop adoption.

“ She’s seen a huge increase in net income. She’s been creative and figured out how cover crops work for her.

Gemperle’s trees were 9 years old when she first planted cover crops in 2012. Thanks to meticulously kept records, she credits cover crops for increasing yield by about 8% while, at the same time, reducing her pesticide and herbicide costs.

Her strategy – which has evolved through the years – is relatively simple. She plants cover crops in every other row, usually by early October. She waters those seeds during her last post-harvest irrigation of the fall. She uses the “clean” rows – those without cover crop seeds – to remove mummy nuts and prune. Once those tasks are finished, she plants her other cover crop seeds down those rows as well, usually by early December.

“The diversity of weeds she’s seen has decreased so a lot of the hard-to-kill weeds have disappeared as the cover crop has taken over. She doesn’t have to spray as often and she doesn’t have to use as much material,” Roots explained. “She also doesn’t spray in May for mites because of all the beneficial insects that her cover crops host.”

“She’s found a good way to be cost-effective and get the job done in an economic manner. Especially since she’s doing all the work herself,” Roots said.

Roots added reaching out to the Almond Board or American Farmland Trust to participate in a case study can be a good way for a grower interested in determining the ROI of their existing, or potential future, cover crops. It can be used to determine the ROI of their own orchards as each situation is likely to be unique.

“Everybody implements cover crops a little differently,” he said.