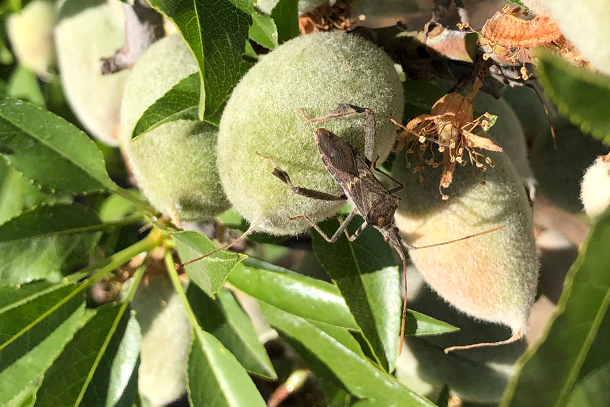 With the rise of leaffooted bug damage showing up in almond kernels at the handler, the bottom line of growers is at stake. Research funded by the Almond Board of California and conducted at UC Riverside, is expanding much needed tools for effective IPM monitoring protocol to combat the pest.

Across the industry, handlers have seen higher rates of brown spot damage caused by leaffooted bug – and true bugs, such as stink bug – which has led to increased rejection rates.

Growers are limited to the best monitoring protocols available today, but they can be time and labor intensive, often pointing out damage after it’s too late to act.

A multiyear effort led be UC Riverside Entomology Professor Jocelyn Millar – and funded by the Almond Board of California – has worked to improve the monitoring options for the pest.

“You can take beat samples of the crop canopy to look for adults or nymphs, but we’ve never established any kind of treatment threshold for that practice,” said Houston Wilson, assistant cooperative extension specialist in the Department of Entomology at UC Riverside and collaborator on the project. “You can look for signs of feeding damage, which manifests in gummosis, which can also be caused by a number of things.”

Wilson said growers can cut gummy nuts open to look for evidence of leaffooted bug penetration of the kernel.

“Identifying gummosis is easier because you can look for the signs, but it’s an artifact – by the time you see it, the leaffooted bug has already damaged the nuts,” Wilson said. “We don’t have a passive sampling system for leaffooted bug, like for navel orangeworm, where a pheromone attracts the insect to a trap,” Wilson said. “What we’re trying to develop is a lure – a pheromone – and a better trap.” 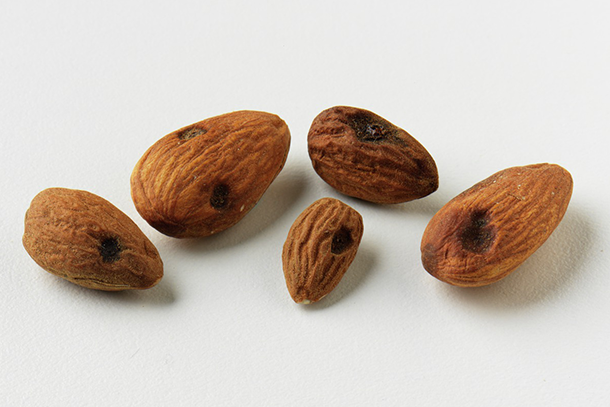 Over the past five years, Millar and his team have been isolating and identifying compounds that make up the leafooted bug pheromone. Nine compounds were identified, and the team began work to synthesize each one. Wilson said that some of the compounds were relatively easy to identify, but others were not, “the last pheromone compound we identified was entirely new to science.”

In the latest project update, Millar noted that this new compound was a relatively small part of the overall pheromone composition but it packed the biggest punch, triggering the strongest responses from the bugs. Over the last two years, Millar’s team has been able to collect enough material to identify the compound and effectively synthesize it.

At the same time as the pheromone work, the team at UC Riverside – and other collaborators such as Cooperative Extension Specialist Kent Daane – began looking at the best trap for the application. They tested multiple styles of traps and colors, ultimately identifying that a hanging cross-vane panel trap coated with a sticky substance – yellow or blue in color – performed the best for trapping leaffooted bug.

With a fully recreated pheromone and an effective trap, the team ran trap trials in commercial almond, pistachio and pomegranate orchards in the Central Valley. Based on in-field trials, the team concluded that the trap and pheromone were both very effective and will look to the private sector to commercialize the new monitoring system.

“We demonstrated in field trials last summer and this spring that the synthetic pheromone blend is highly attractive to females,” Wilson said. “Now we’re looking at what minimal blend of compounds are needed to attract the pest. If we want this to be a commercially viable lure, we have to find the most cost-effective composition. In many cases, it’s not necessarily required to have the full bouquet of compounds in a pheromone blend to have a functional lure.”

Once the right balance is determined for a synthetic blend that lures leaffooted bugs to a trap the next step is understanding what trap catch means on population density in an orchard. This will define treatment thresholds, giving growers guidance on timing to combat leaffooted bug before damage occurs on kernels. Private industry will likely takeover at this point to develop the traps for the industry. For Wilson, this prospect has him cautiously optimistic.

“We’re very fired up with this pheromone blend, but I’m also trying not to get ahead of myself before we know what the cost will be for a commercial and scalable lure.”