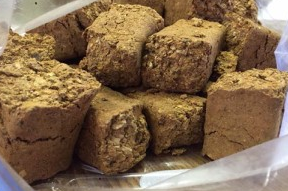 6/10/20 update: The protocol is in place, and APHIS has submitted to GACC the first group of facilities that have been certified to export. This list will be published on the GACC website.
Next steps: Before companies can export, pelletized/cubed almond hulls must be listed in the Feed Ingredients Catalogue of the Ministry of Agriculture and Rural Affairs (MARA). ABC is working with the USDA Foreign Agricultural Service in Beijing and others to see that pelletized/cubed hulls get listed. ABC is also confirming import licensing/registration requirements with MARA, which must be done through an importer in China. ABC will provide an update as soon as available.

(May 22, 2020) – The Phase 1 Trade Agreement between China and the United States, established in January 2020, noted market access for several U.S. agricultural commodities, including pelletized and cubed almond hulls. Now, the United States Department of Agriculture (USDA) Animal and Plant Health Inspection Service (APHIS) and China’s General Administration of Customs (GACC) have completed the protocol that will enable the export of pelletized or cubed almond hulls to China. The signing of this protocol is the culmination of three years of collaboration among the California almond industry, government officials, the Almond Board of California (ABC) and the

Now that the protocol has been signed, the next steps is to launch market access, a process that will take a few weeks to develop. USDA-APHIS is currently negotiating final requirements with GACC on how to qualify companies for the program, as USDA-APHIS must develop the approved list of facilities that plan to export pelletized/cubed hulls. USDA-APHIS will also need to certify that exporters comply with the elements of the protocol, including a physical inspection of facilities, before they can issue the approved phytosanitary certificates to ship. Finally, USDA-APHIS must update the PeXD database to reflect export requirements, which will happen when all details have been finalized.

Why hulls?
Approximately 4.5 billion pounds of almonds hulls are harvested each crop year. Hulls provide good nutritional value that dairies in the western United States have capitalized on for years. But there is also great potential for hull use in other markets, including China. As a major importer of animal feed ingredients, it is expected that pelletized/cubed almonds hulls will be well-received in China.

In working with USDA-APHIS on this effort, the initial focus on pelletized and cubed hulls was seen as an entry point – but ABC’s work will not stop there. ABC is already in discussion with USDA-APHIS and U.S. trade negotiators on what next steps are needed to initiate a request for market access for bulk almond hulls. Several California companies have expressed strong interest in shipping raw hulls to China, and South Korea, for example, is currently importing almond hulls from the U.S. for animal feed and has been doing so successfully for several years.

“The opening up of pelletized hulls/cubes to China will no doubt provide another avenue to bring more value to growers who produce almonds. It will also help the almond industry in its effort to achieve the Almond Orchard 2025 Goal on zero waste, as finding higher value solutions for hulls is in line with our effort to put everything grown to optimal use,” said ABC Vice President of Technical and Regulatory Affairs Julie Adams. “We see this as a win for exporters and a win for the California almond industry.”