Crown rot and root rot are nasty diseases; here’s how to avoid them

Controlling irrigation, planting new trees on berms or mounds and choosing the right rootstock all are effective ways to avoid crown rot or root rot in almond orchards. 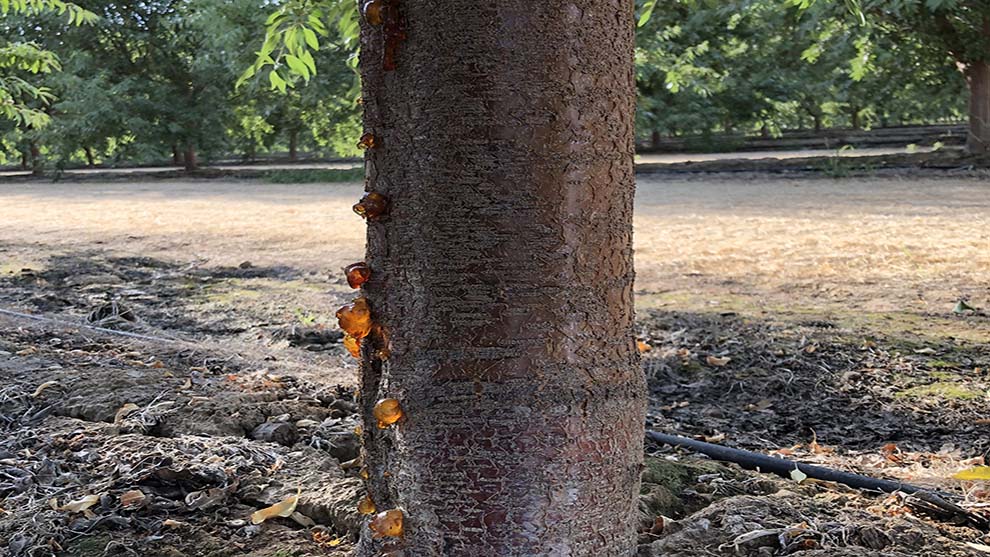 As the cause of crown rot and root rot, Phytophthora can wreak havoc in an orchard.

“Over time, it virtually strangles trees to death,” said Drew Wolter, Senior Specialist for Pest Management for the Almond Board of California.

That makes perfect sense when assessing the threat Phytophthora poses to an almond orchard. At first glance, it might seem to be a fungus, when in fact it is a plant-damaging water mold that causes root rot and crown rot – two diseases that can wreak havoc in an orchard.

Phytophthora is thought to be present in the soil in most orchards as well as in much of the surface water used for irrigation. Left untreated, root rot and crown rot can devastate orchards, especially those with young trees, by impeding their ability to take in nutrients and water.

“Over time, it virtually strangles trees to death,” said Drew Wolter, Senior Specialist for Pest Management for the Almond Board of California.

Root rot and crown rot both are heavily influenced by excessive moisture at the base of trees. That is a key reason that orchard experts recommend that trees be planted on a berm or a mound, which will help drain excess water away from the crown of a tree. Berms or mounds should be 8 to 10 inches higher than the orchard floor and the graft union should be well above the soil line.

“When there is puddling in orchard or spots that are saturated for an extended period, conditions heavily favor Phytophthora infections,” Wolter explained. “These conditions allow the pathogen with ample inoculum to be present at the root crown/soil interface for enough time to directly invades plant tissues at the root crown.”

Despite their origins, crown rot and root rot are not identical.Crown rot can progress quickly and, if left untreated, often will quickly kill infected trees as warm weather appears in the springtime. Leaves may remain attached to trees even as they wilt and die. Young trees are most at risk because their root systems and crown areas are much smaller than mature trees.

Root rot, conversely, can take years to kill a tree, though the tree’s health will be diminished during that time. Infected trees will suffer stunted growth, early leaf fall and reduced yields during their lifespans.

The UC IPM website offers these guidelines to growers concerned about the potential of crown rot or root rot in their orchards. Properly managing irrigation to avoid overwatering is the common denominator:

Rootstock can make a difference and other considerations

Beyond planting on berms and controlling the rate and volume of water provided to trees, there are other things growers can do to prevent or control crown rot and root rot.

The first is to consider the appropriate rootstock for soil conditions and varietal. In a post from September 2019, David Doll – “The Almond Doctor” – writes that “different rootstocks have varying genetic tolerances to disease.”

In addition to choosing the right rootstock, Wolter said ensuring that drip emitters are not placed directly against root crowns also will help to minimize favorable conditions for crown rot and root rot.

“If your irrigation system utilizes micro rotors, make sure the water being casted is not landing directly on the root crown,” he advised.

In young orchards, Wolter said it is common to have the initial wetting pattern at or close to the root crown to help trees establish and develop root systems. He recommended that the drip emitters be gradually moved out and away from the trees as they become established. Irrigation sets also should be run for longer periods of time.

Are there treatment options?

Wolter said that recent research by Dr. Jim Adaskaveg and Dr. Greg Brown -- funded by the Almond Board -- shows that a new fungicide oxathiapiprolin (FRAC code: 49) is a highly effective option against 11 Phytophthora species found in California almonds. Oxathiapiprolin was federally registered for almonds in December 2020 (California registration is pending). and is awaiting California approval.

“It is the most effective fungicide to reduce trunk gumming and canker formation,” Wolter explained. “The systemic activity of this fungicide allows for uptake into tissues after soil applications are made post planting.”

Mefenoxam (FRAC code: 4) is a contact fungicide, meaning it must come into contact with the pathogen to reduce the inoculum load in the soil.  that can be effective at application. Wolter said mefenoxam is highly effective at managing current inoculum but it’sit is not a systemic product, so it won’t last long enough to protect trees if they are exposed again to Phytophthora.

Some growers may have heard of the biological control Galltrol being used against crown rot or root rot. Wolter said Galltrol is an agrobacterium radiobacter (Strain K84) that typically is used to treat grown gall and not Phytophthora.