Ganoderma adspersum destroys almond trees from the inside out by rotting the wood at the base of the tree. Though there is no cure, there are strategies that lessen its risk to any orchard. 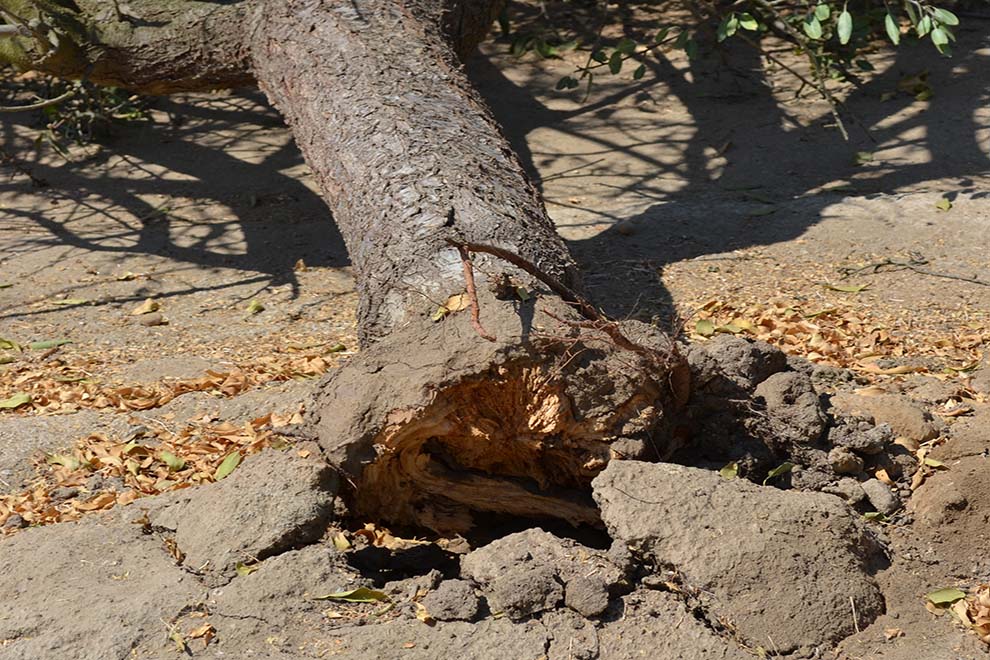 "Since 2015, more than 70 almond orchards in the southern San Joaquin Valley have been infected with an insidious disease that kills trees from the inside out. It’s caused by a fungus called Ganoderma adspersum, which leads to wood rot so severe at the base of trees that some can be pushed over by  leaning against them.

There are four kinds of Ganoderma in California, but G. adspersum is considered the worst. All are spread from tree to tree by spores in the air. Typically, G. adspersum attacks trees that have been wounded by shaking. Trees as young as 4 years old have been infected, though the average age is about 14, according to Bob Johnson, a UC plant pathology Ph.D. student who has studied the spread of Ganoderma.

Infected trees have large conks at their base, often growing near a V-shaped cleft. Experts say the conks can produce 12 million to 40 million spores a day, exponentially increasing the odds of widespread infection across multiple acres. Other symptoms of infected trees include a less dense canopy, a later-than-normal bloom, shallow root systems and flat strips on their trunk.

Perhaps one of the most concerning aspects of Ganoderma is that it can go undetected for as many as five years before signs of a fruiting body begin to show, said Drew Wolter, Senior Specialist for Pest Management for the Almond Board of California.

“Even then, there are cases when this species will go visually undetected while the fungus eats away at the structural integrity known as heartwood in the center of the trunk,” Wolter said.

What can growers do?

Unfortunately, there is no treatment for Ganoderma. Wolter advised growers who see conks developing to remove them, which will not cure the tree but will reduce the number of spores spread throughout the rest of the orchard.

The best ways to prevent Ganoderma outbreaks, Wolter said, is to avoid inflicting bark wounds to trees during shaking. He said strategic deficit irrigation (SDI) is one standard practice growers use to strengthen tree bark and lessen the chances of wounds.

Wolter shared these tips regarding SDI:

More information on the use of pressure chambers is available at UC Davis Fruit and Nut Research and Information webpage.

Wolter noted that SDI and proper nitrogen management may be familiar practices for some growers. Both are part of an effective integrated pest management strategy in the fight against navel orangeworm and hull rot.

Rootstocks may play a part

Wolter said current research has not shown there to be any correlation between almond varietals – specifically those with softer bark – and their susceptibility to Ganoderma. That’s because the fungus primarily affects the root crown at or above the soil line. Instead, he said preliminary data has shown peach rootstocks to possibly be at higher risk for the fungus.

The experts’ advice to growers about Ganoderma is to avoid machine-shaking their trees any sooner than necessary after a new tree has been planted.

“The longer that you can put off shaking a new, young tree, the better,” Johnson said at the 2019 Almond Conference in Sacramento. “If you infect a little tree, the disease has a head start. A bigger tree has a better chance. A young tree might fall at 9 or 10 years old. An older tree might last 20 years.”