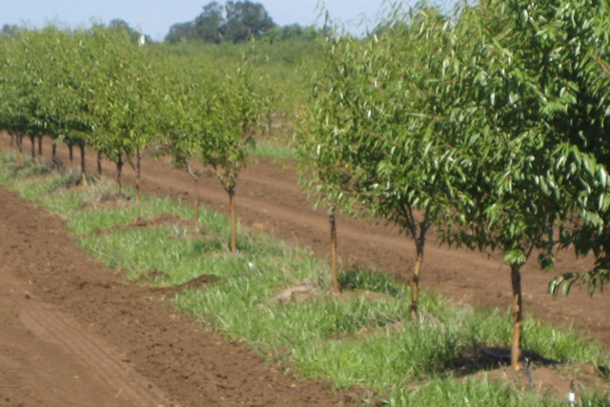 A row of weak almond trees because of nematode infection. Courtesy: Andreas Westphal

Nematode suppression in almond orchards can be tricky. Multiple variables need to be factored into a grower’s equation on how to successfully limit the pest. Dr. Andreas Westphal, UC Riverside Professor of Cooperative Extension Nematology, and his team at the Kearney Agricultural Research & Extension Center aim to help producers manage plant-parasitic nematodes in a way that is right for their soil type and environmental conditions.

“In plant-parasitic nematodes, general symptoms that warrant further diagnostic efforts are excessive wilting during high ET events despite sufficient soil water availability, lack of tree vigor, and uneven growth throughout the orchard, among others,” Westphal said while noting that local conditions need to be considered.

Nematodes thrive in many different soils; some species flourish and cause more damage in sandy soils. California’s climate is very conducive for the development of damaging population densities of these soil-dwelling parasites. In an orchard with many different types of soil, growers may see stressed trees in the sandy areas and assume that’s water stress. Westphal noted that growers may have a nematode issue without realizing it. “Root-knot nematodes and ring nematodes are species that do show a preference for sandy soils,” he said. “If these species are introduced in a field with variable soil texture composition, they are likely to strive for largely damaging population densities in the sandier areas of the field compared to those of heavy ground.” Soil type needs to be considered when diagnosing stressed trees in an orchard.

Some rootstocks resistant to specific nematodes have been around for decades, but Westphal said there are major considerations when using them.

There is no silver bullet to protecting trees from all nematodes. Westphal shared that some of the more popular root-knot nematode-resistant varieties – such as Nemaguard – are still susceptible to root lesion and ring nematodes. Furthermore, California now has a new invasive species called Peach Root-Knot Nematodes. This California-new nematode attacks the very same resistant rootstock varieties growers are using today for protection from root-knot nematode species that have been around for a long time.

Because of the complexities when diagnosing and managing nematode issues in an orchard, Westphal believes new approaches need to be developed including traditional soil treatments and holistic approaches such as cover cropping.

Westphal and his team are hosting a nematode field day for walnut and almond producers to talk about the challenges and opportunities for a truly integrated pest management program for managing the pest. Almond growers are invited to the Kearney Agricultural Research and Extension Center in Parlier on December 1. The field day runs from 8:00 a.m. to 12:00 p.m. and 4.0 continuing education credits are available. Space is limited to 100 participants and interested parties are encouraged to register now.