Allan Fulton made many significant contributions to agriculture in his 32-year career, particularly in the areas of irrigation and water management. 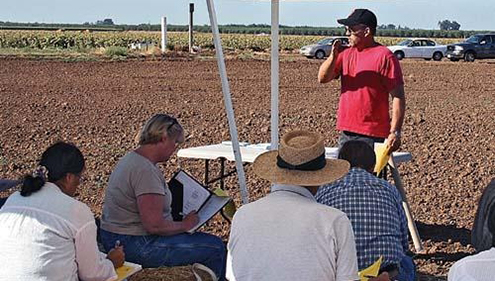 During his long and impactful career in California agriculture, Allan Fulton played a pivotal role in helping growers – particularly those in the almond industry – better understand how to effectively manage water to ensure maximum yield while conserving every drop, an achievement especially significant given California’s history with drought conditions.

Starting his career in the Southern San Joaquin Valley, and then working in the Northern Sacramento Valley for the past 20 years, Fulton was on the cutting edge of important research that led to measureable improvements in irrigation efficiency and overall knowledge of trees’ water needs. Today, after his retirement in late June as a University of California Cooperative Extension (UCCE) farm advisor, Fulton is being celebrated for his role in identifying and championing critical changes in how water is applied in orchards.

The five-year ABC-funded Water Production Function (WPF) research project (2013-2017) is just one example of Fulton’s contributions to the industry. For this project, Fulton worked with a team to compare water demands and water supply impacts on almond trees in the northern, central and southern portions of the Central Valley.

“This research improved our understanding of the amount of water almond trees could use under current yields and horticultural management,” said Gabriele Ludwig, Ph.D., director of Sustainability and Environmental Affairs for the Almond Board.

“Allan’s contribution to the WPF project and the overall industry was to reinforce with replicated research numbers the fact that northern valley and southern valley almond production is not the same animal,” said Blake Sanden, UC Cooperative Extension Emeritus, who also was part of the WPF project. “There are cultural and climatic differences that make Northern California almonds less water responsive (and, on average, less productive tonnage-wise) as compared to Southern California almonds. This means that almond growers in the north valley may not be able to crank out as many pounds per acre, but with careful water management they may be able to produce more crop per drop of irrigation water than south valley growers.”

Fulton also played a key role in research that led the Almond Board to develop its Almond Irrigation Improvement Continuum, a 149-page comprehensive manual packed with information from farm advisors and other irrigation specialists on irrigation management and scheduling practices for growers. Specifically, Fulton identified the importance of achieving distribution uniformity, a measure of how evenly the same amount of water is being applied across an orchard, and including that in the Continuum.

“After conducting monitoring in orchards, he noted that each one had tremendous variability in the amount of water applied by individual drippers/sprinklers, leading to some trees or parts of an orchard becoming over- or under-irrigated, and if fertigated, over- or under-fertilized,” said Ludwig. “He regularly spoke to growers about the need to ensure their irrigation system was functioning correctly, otherwise they were not going to be irrigating effectively to meet their trees’ needs.”

Ken Shackel, a professor in the UC Davis Plant Sciences Department, worked with Fulton for three decades. He called him a “humble and soft-spoken colleague” who had a major impact on California agriculture, citing his work with pressure chambers to reduce water usage by as much as 50% in some almond orchards via deficit irrigation.

“At the time, the problem was that hull split in the same orchard could be very uneven, with trees on a loamy soil splitting one month later than trees on a gravelly soil,” Shackel said. “In 2000, Allan took the initiative and compared pressure chamber readings on trees in each soil, and found a very striking difference. These measurements resulted in an industry-supported research project starting in 2001, and Allan found – much to everyone’s surprise – that irrigation could be stopped more than a month earlier in the loam soil compared to the gravel soil. This practice synchronized hull split on both soils, which had never occurred previously.”

Though he spent almost all his professional career in California, Fulton is not a native of the state. He grew up on an irrigated farm and cattle ranch in southwestern Colorado, nearly a thousand miles from the fertile fields and productive orchards of the Central Valley. He went to Colorado State University, where he majored in plant and soil science, and later earned his master’s degree with a focus on irrigation that crossed over into agriculture engineering.

Staying on the family farm was not an option, so in 1986 Fulton moved west. As a research and training assistant, he taught a three-month course on irrigation practices in California. Soon after, he was hired as the UCCE soils, water and winter grains farm advisor in Kings County. After a short return to Colorado in 1997, Fulton returned to work for the UCCE in 2000 as an irrigation and water resources advisor for the Northern Sacramento Valley, based in Red Bluff. During his career, Fulton was also a frequent speaker at the industry’s annual Almond Board-hosted event, The Almond Conference, and taught dozens of short courses on irrigation.

When asked about his career legacy, Fulton said, “I’d just like to be thought of as an advocate for a responsible irrigated agriculture industry that works thoughtfully and diligently toward farming sustainably and providing healthy, reliable food and fiber.

“I wanted to give growers and consultants irrigation management tools to assess the progress of their crops from the different perspectives of the weather, soil and crop water status so they could improve their confidence in their decisions. I also wanted to help them build their skill set so that they could become as self-sufficient as possible to make management decisions independently.”

Fulton plans to remain in the Red Bluff area, enjoying more time with family and friends while staying engaged in the ag industry by doing some consulting.

To all his colleagues and the growers he worked with, “I’d just like to say thank you for the blessing of the opportunity to be part of the California agricultural industry.”