Growers Attest to the Benefits of Cover Crops 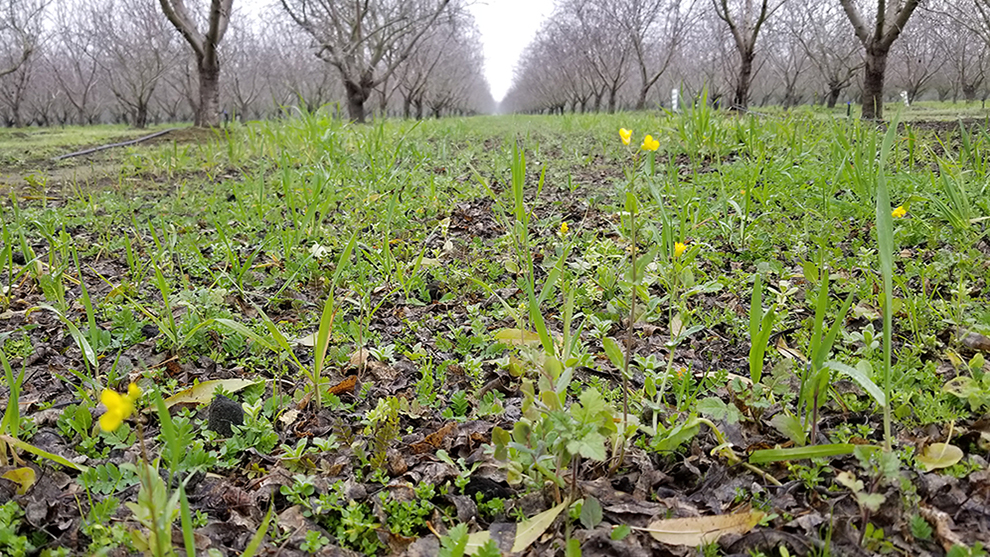 The orchards of almond growers Ben King and Chris Rishwain are about 100 miles apart. And while King is based in Colusa County and Rishwain in San Joaquin County, they share a passion that is becoming increasingly common among both almond growers and Californians statewide – the use of cover crops to provide nutrition for honey bees and other natural pollinators, in addition to other in-orchard benefits.

King, whose late brother was involved in the bee industry, was an early adopter of cover crops and has planted them in his 950 acres of almonds and pecans for the past five years. He also has hedgerows of manzanita around his property to provide additional forage and habitat for beneficial insects.

“Honey bees are the ambassadors of agriculture,” King said. “If we approach their population in a more holistic way, understanding their role outside of almonds, we can play a large role in promoting their health by providing forage for not only honey bees but also native pollinators who naturally exist in the larger ecosystem.”

Rishwain is a more recent convert, having planted his first cover crop two winters ago on about half of his 150-acre orchard. The crop performed so well that last winter he expanded his planting across his entire orchard.

“My original intent was to support bee health during pollination,” he said during an Almond Board webinar in early July. “However, I started to look at other benefits that we could achieve in the orchard via cover crops, including addressing soil compaction, increasing soil nutrition and adding nitrogen to the soil.”

King and Rishwain are just two of the many growers who are enjoying success on multiple fronts by using cover crops. Now, the Almond Board of California (ABC) is partnering with other groups to make it even easier – and affordable – for growers to participate.

As part of this scholarship, ABC has teamed up with Pollinator Partnership, the world’s largest nonprofit dedicated to pollinators and their ecosystems, to align the California Almond Sustainability Program (CASP) with the market-oriented Bee Friendly Farming (BFF) program. This will allow growers to use the Bee Friendly Farming certified logo when marketing their products (via stickers and a road sign, among other benefits). With this alignment, growers who complete certain modules in CASP can easily register as a Bee Friendly Farm and start the process to becoming Bee Friendly certified.

“BFF is about using practices that support healthy pollinators and can have additional benefits to the crop [almonds] itself. The program is affordable and rewards growers in the marketplace,” said Josette Lewis, Ph.D., Chief Scientific Officer at the Almond Board.

Because cover crops are a key component of BFF, within this scholarship the Almond Board is also working with Project Apis m. (PAm) to provide FREE cover crop seed to growers through PAm.’s Seeds for Bees program. Each grower is eligible for up to $2,000 of cover crop seed. PAm. offers four different seed mixes from which growers can choose, depending upon their goals and soil situation. Rishwain said he consulted with Billy Synk, Project Apis m.’s director of Pollination Programs, before choosing his cover crop.

“This program makes it easy to choose the right seed by removing all the guess work from the decision-making process,” Rishwain said. “I was able to effectively identify what would work well in my orchard.”

These two factors – being Bee Friendly certified and receiving free seed – work hand in hand as the two pillars of ABC’s Bee+ Scholarship. The Almond Board is offering scholarships to the first 100 growers who apply – so apply today! Visit Almonds.com/Pollination to learn more about this program and get started.

It was a sense of responsibility to the bees and the environment that motivated King to first plant cover crops. He believes expanding habitat for bees and other native pollinators is the right thing to do and has benefits far beyond his orchard.

In addition to cover crops’ benefit to bees, on the growing side improved soil health is an impactful advantage to planting forage. And, Rishwain said another benefit he has experienced is reduced dust during harvest: The cover crop’s roots provide more organic material within his orchard’s sandy loam soil, which helps to keep dust levels down.

Like King, Rishwain sowed the seeds for his cover crops in October, after harvest. Both growers relied on rain in the late fall and winter to promote germination, which led to plenty of flowers blooming between the orchard rows before the almond bloom in February, allowing for maximum benefits to the incoming honey bees.

Rishwain also said the cover crop didn’t interfere with winter sanitation. By late April and early May, when it was time to get rid of the cover crop, Rishwain mowed it down and let the residue break down on the top of the soil. The following harvest, Rishwain used a conditioner to filter out any remaining organic debris on the orchard floor prior to sweeping and picking up the nuts. This year, he is considering whether to incorporate his next cover crop back into the soil, further “feeding it” with organic material.

Overall, the growers attest that cover crops are a huge win.

“I’m a huge believer in cover crops,” Rishwain said. “There are so many positives. The cost is minimal. It’s definitely helped with our soil compaction. I see improvement during pollination. And ultimately, we get a lot of bees and a lot of pollination, and at the same time our beekeeper is happy and says the hive strength is phenomenal.”

The bigger picture: how cover crops fit into the larger landscape of CA agriculture

California is among the top agricultural economies in the world, leading national and, in some cases, global production in the supply of dairy, nuts, fruits and vegetables needed for a healthy diet. The state is also among the most biodiverse regions in the world, and policymakers and consumers are increasingly showing interest in the topic of biodiversity. In fact, some conservation groups have petitioned that four native bees be listed under the Endangered Species Act in California. According to Lewis, two of those bees’ territory overlaps with growing areas in the Central Valley.

Right now, members of California agriculture – including almond growers – have a significant opportunity to improve pollinator ecosystems on their operations, and to be part of the solution in improving pollinator health. Lewis thinks the almond industry has a positive story to tell in the area of honey bee health, and she said planting cover crops is just one way almond growers can contribute not only to honey bee health but also the wellbeing of native pollinators.

“Almond growers already know and work hard to provide good environments for honey bees, making investments that pay off in sustained pollination services that are critical to our crop,” Lewis said. “By building on those efforts – with a focus on planting cover crop hedgerows or buffer strips outside the orchard and practicing integrated pest management year round – we can support pollinators and expand biodiversity in and around our orchards.”