How to Control Fungal Canker Diseases

Contributed by Florent P. Trouillas, Associate Cooperative Extension Specialist in the Department of Plant Pathology at the University of California, Davis

With continued support from the Almond Board of California (ABC), we conducted additional research and field trials that aimed to develop control strategies against almond canker diseases. Recently, we established management guidelines to help growers limit the incidence of fungal canker diseases in almond and promote tree health in the orchard.

A common lifecycle of fungal canker pathogens involves spores being released from fruiting structures (pycnidia or perithecia) on the dead wood of infected plant hosts during rain events and then being spread via rain or wind to fresh wounds and openings in the bark. In almonds, fungal canker diseases usually originate at pruning wounds or wounds resulting from mechanical injuries from field equipment to trees’ trunks and branches. Cracks at the tree crotch or on the trunk can also serve as additional entry points for canker pathogens.

A critical operation in almond production that presents a high risk of infection is pruning, especially pruning associated with the selection of primary and secondary scaffolds that will provide the future tree shape and structure. Scaffold selection occurs soon after planting and limbs not selected for the tree framework are cut away, leaving large pruning wounds on trees. Large wounds near the trunk make trees particularly vulnerable to infection, and any infection of the trunk by a canker pathogen can lead rapidly to tree death. Similarly, maintenance pruning of mature trees – made to improve light interception and air circulation in the canopy, or to facilitate the passage of field equipment – can also lead to large pruning wounds on trees.

Pruning of almond trees often takes place during the winter months when trees are dormant, which also coincides with the rainy season in California and thus the time when spores of fungal pathogens are most prevalent. As pruning wounds are highly susceptible to infection and early infection of young trees could challenge the good establishment of almond orchards, protection of pruning wounds with a fungicidal product or a biological control agent is recommended to reduce infection by canker pathogens.

Once a tree is infected with canker diseases, it generally cannot be cured, thus; prevention is key. Wound protection is recommended particularly following major pruning events such as primary and secondary scaffold selection and maintenance pruning if performed during the fall, winter or spring in California. 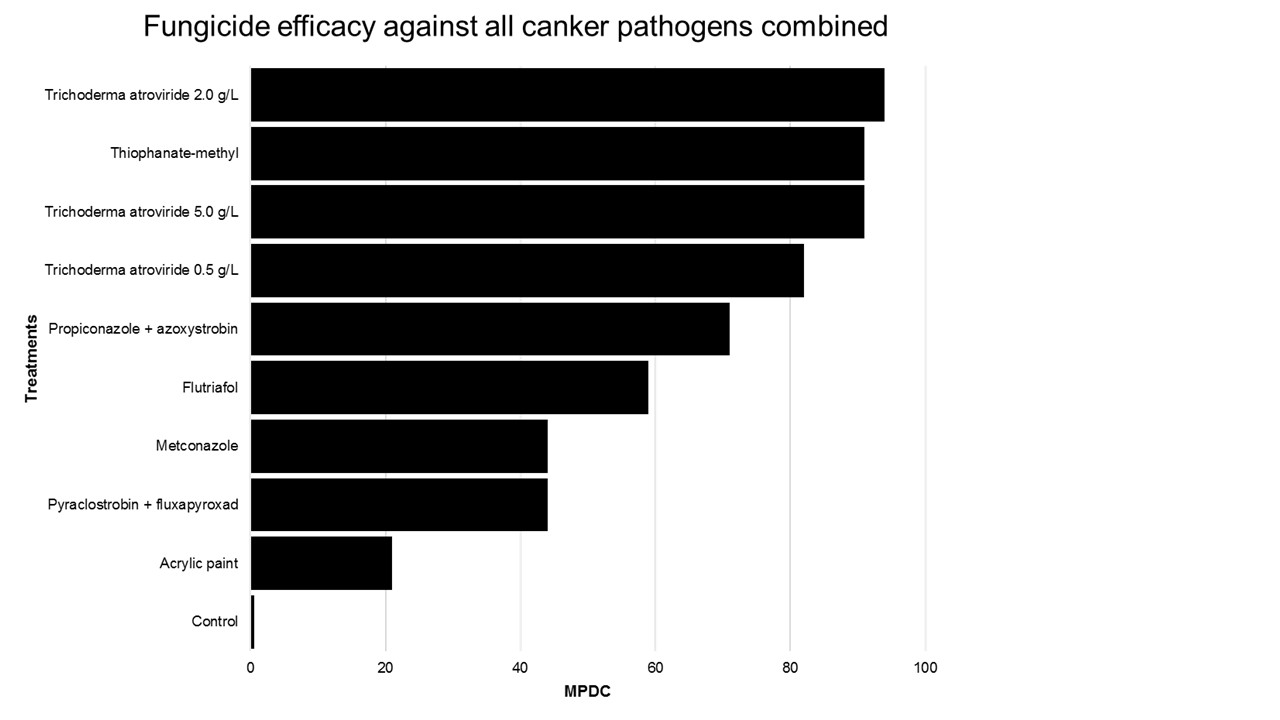 Recent research conducted in our laboratory investigated the susceptibility of almond pruning wounds to fungal canker pathogens according to the month of pruning, i.e. September, October, November, December and January.

The high susceptibility of pruning wounds immediately following pruning and up to two weeks after stresses the need for protecting these wounds right after pruning. Interestingly, the two-week susceptibility window of pruning wound overlaps with the two-week residual activity of most chemical fungicides. This suggests that a single application of a pruning wound protectant right after pruning suffices to reduce infection. In comparison to chemical fungicides and physical barriers such as paint, biological control agents such as Trichoderma, when applied on the surface of a pruning wound, can colonize wood and establish durably in the host tissues, providing long-term protection of trees against canker pathogens.

It is common knowledge that trees subjected to any type of stress become more susceptible to infection by canker pathogens. Conversely, maintaining good nutrition and water status in trees generally minimizes tree stress and can help trees overcome canker pathogens. Also, proper training of young trees will create strong branch attachment and help ensure branches will not split as the tree matures, which can help reduce infection.

When pruning, growers should avoid making horizontal pruning cuts as they may allow for an accumulation of water. Overall, pruning should not be conducted during or following rainfall, as doing so would permit the release of fungal spores. As for Ceratocystis canker, the disease may be managed by avoiding bark injuries from mechanical shakers. Ultimately, if the bark is injured, the damaged tissue should be removed to the edge of the injury to promote callus formation. Dead almond trees, including stumps, as well as dead wood from other susceptible woody crops such as apricots, grapevines, pistachios, prunes, sweet cherries, and walnuts next to commercial almond orchards should be removed and destroyed to reduce inoculum. Finally, adjusting sprinkler irrigation locations so that tree trunks are not wetted will help reduce the incidence of canker diseases. 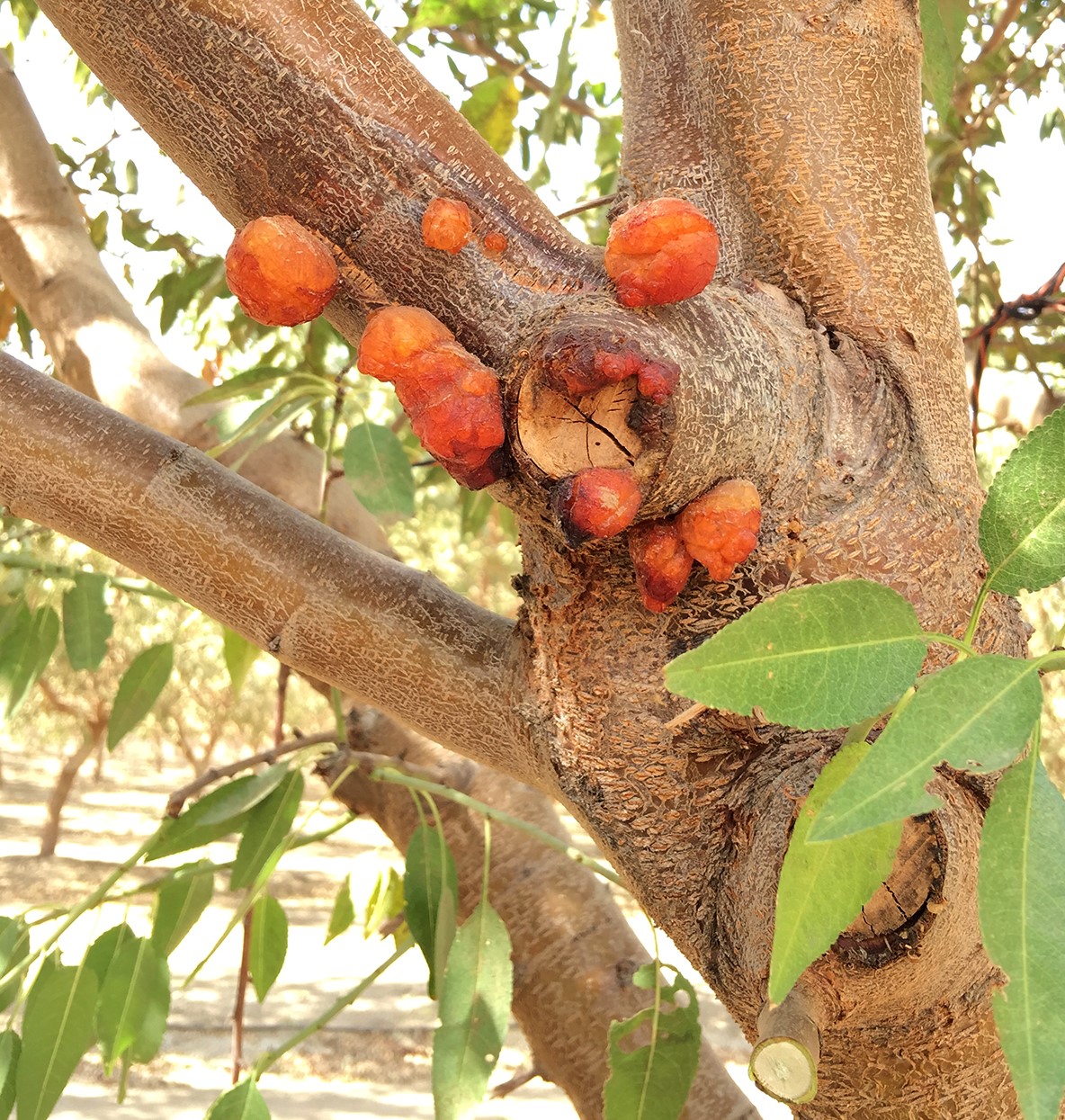 Above is an example of Botryosphaeria canker developing at a pruning wound made for secondary scaffold selection. Photo courtesy of Florent P Trouillas

Combined results of pruning wound protection and susceptibility experiments provided strong evidence that successful protection of almond trees against fungal canker pathogens can be achieved. While pruning should always be avoided during and following rainfall, late-January pruning combined with a single application of a protective fungicide or biological control agent applied immediately after pruning is recommended to reduce the risk of infection caused by canker pathogens.

Our research indicates that both Topsin M and Vintec can provide great protection of almond pruning wounds against a broad spectrum of fungal canker pathogens including those responsible for band canker, Ceratocystis canker, Cytospora canker and Eutypa canker. Recently, Topsin M has received a 2(ee) label recommendation for use in almonds as a pruning wound protectant against canker pathogens. Similarly, the biological control product Vintec is currently in the registration phase in California for use against canker diseases in almonds.

While air blast systems are well adapted for the application of conventional fungicides (i.e. Topsin M: check label rates and recommendations for use), they appear less reliable for the application of Vintec. One reason for this is that tanks used on farms for conventional fungicide applications often contain fungicide residues that may impact the viability of the biological control agent. Field trials are ongoing in our laboratory to optimize application methods and effective delivery of Vintec to pruning wounds. So far, our results suggest that clean, manual-pressure (hand pump) backpack sprayers are better adapted for the application of Vintec to fresh pruning wounds, as this topical application method mainly targets pruning wounds. Furthermore, our current data indicates that Vintec (1g/L) performs best when mixed with a sticker-spreader adjuvant, demonstrating an efficacy level comparable to that of Tospin M. The availability of Vintec to protect almond trees against canker pathogens adds new biological control solutions to almond growers in California, thus enhancing the long-term sustainability of almond production.

Growers are also encouraged to check out the University of California IPM website for more information on various types of canker diseases.