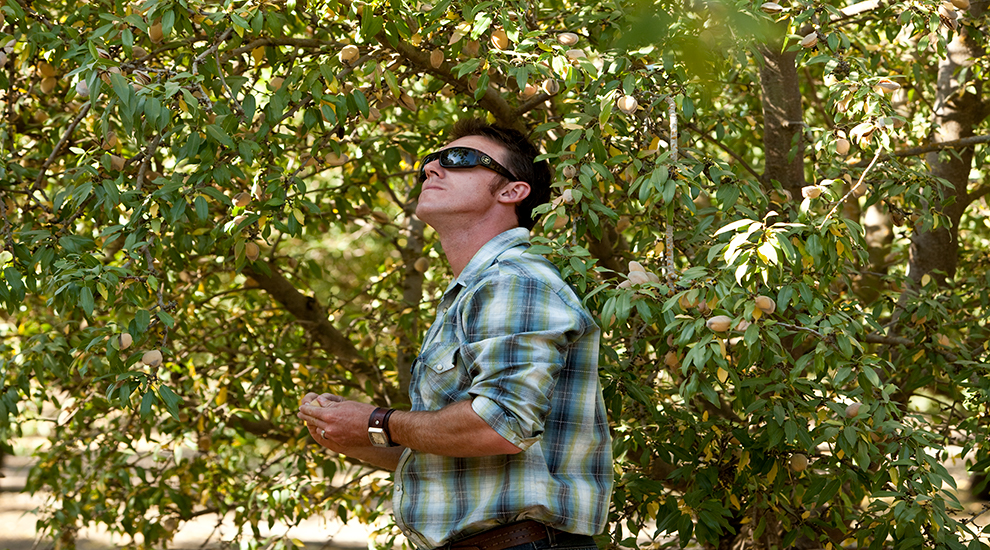 Almond experts say there is only one proven way to know when hull split begins: inspect your trees from the top down, starting in the southwest corner of the canopy.

The importance of knowing precisely when hull split occurs is critical because it signals the proper timing for treatments to control navel orangeworm (NOW) and, as appropriate, hull rot. Whether growers use a ladder, climb atop a pruning tower or lop off a few high branches with extension pruners, the goal is to understand what’s happening in the top of the tree, where nuts mature at a faster rate.

Simply looking up into a tree’s canopy from the orchard floor is a sure fire way to miss the advent of hull split. When hulls split, a scent is released into the air, attracting female NOW moths to lay their eggs on the suture of the splitting hull. As the hull splits, fungal spores also can enter and spawn hull rot infections.

Missing the beginning of hull split and allowing NOW or pathogens to gain a toehold in an orchard can wreck a grower’s entire season and reduce the value of the crop, costing growers in returns if nuts are rejected after harvest.

Growers can determine if hull split has occurred – and if it’s time to spray – if, when they squeeze the end of the hull, the entire suture opens up, exposing the shell within.  Almond hulls split as the fruit ripens, and timing varies based on weather conditions and variety. For instance, the variety Nonpareil typically splits in early- to- mid-July, earlier than some other varieties.

However, it’s at the stage before this, when the hull is split in a deep “V,” that susceptibility to NOW and wound pathogens that cause hull rot (Rhizopus, Aspergillus, and Monilinia) increase, making it vitally important that growers actively monitor their trees.

Vice President of Member Services for Blue Diamond Growers Mel Machado advises growers to look for blank nuts – those without a kernel inside – as those hulls are the first to split, several days ahead of the “sound” nuts (those with a full kernel).

“The blanks are like the warning shot, signaling the start of hull split,” he said. “When full hull split does occur, the nuts at the top of the canopy will open up first.”

Experts say growers should pay attention to trees on the edge of their orchards as they often ripen more quickly. Growers should also closely monitor the upper and outer portions of the canopy, particularly the southwest quadrant of the orchard block where the hot afternoon sun aids in the splitting and drying process.

"Better to be too early than too late"

Hull split applications should be made no later than at 1% hull split. This is the most effective time to spray for NOW as it often coincides with initiation of the second NOW flight.1

Once growers identify hull split in their orchard, their next step should be to initiate timely treatment. Experts warn that waiting too long to begin spraying will cost growers, as will performing a poor spray job.

Machado advised, “It’s better to be a bit on the early side than late” when spraying. Once hull split begins, he recommended the entire orchard be sprayed in five days or less. “If it takes 10 or 15 days, that’s too long,” he said.

Planning ahead – especially for smaller growers who rely on custom applicators – is essential.

“Watch your fields closely and be in contact with your operator early on,” Machado advised. 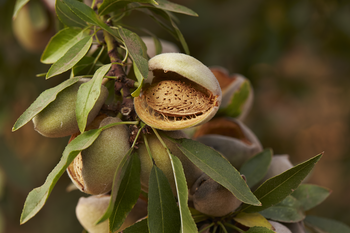 Growers should aim to spray at dusk or in the early morning, as sprays during the day will essentially evaporate due to the heat

“We’re seeing growers effectively incorporate aerial applications into their treatment programs for the first application in order to cover the acreage in a timely manner,” Machado said.

The best time to spray is early in the morning or at dusk.

“Do not spray in the heat of the day – your application will evaporate into thin air and you won’t get the material where it needs to go. That’s a waste of time and money, as you’re not only wasting spray material but you also won’t achieve the coverage necessary to combat crop damage,” Machado said.

Finally, growers should ensure their ground-based sprayers are properly calibrated, the nozzles are unplugged and that air flow isn’t restricted. Once it’s time to spray, growers should remind applicators to drive no more than two mph through orchards to ensure optimum coverage and to drive down each row to ensure the trees are equally covered.

“There are some guys who spray every other row, and that’s not a good idea,” Machado said. “There are two sides to the tree; you need to spray both of them.”

Machado reinforced that hullsplit sprays offer the final chance to manage NOW populations before harvest. Still, these applications are only part of a coordinated, year-round, integrated pest management plan to combat NOW that also must include winter sanitation and mating disruption, both of which are performed earlier in the crop year.

For more tips from Machado on how to calibrate your sprayer and optimize applications, visit Newsroom.Almonds.com.

1 NOW flights can be monitored by checking to see if eggs are being laid on egg or pheromone traps. If an orchard experiences continually high egg or pheromone trap counts, a second insecticide application may be needed. This can be applied two-to-three weeks after the initiation of hull split. It is important to rotate chemistries to reduce resistance development pressure.