Irrigation Technology Fundamental in Almond Orchard of the Future

The almond orchard of the future will combine sensors, satellites and other technology with grower-driven data to reduce water usage without compromising tree health or yield. 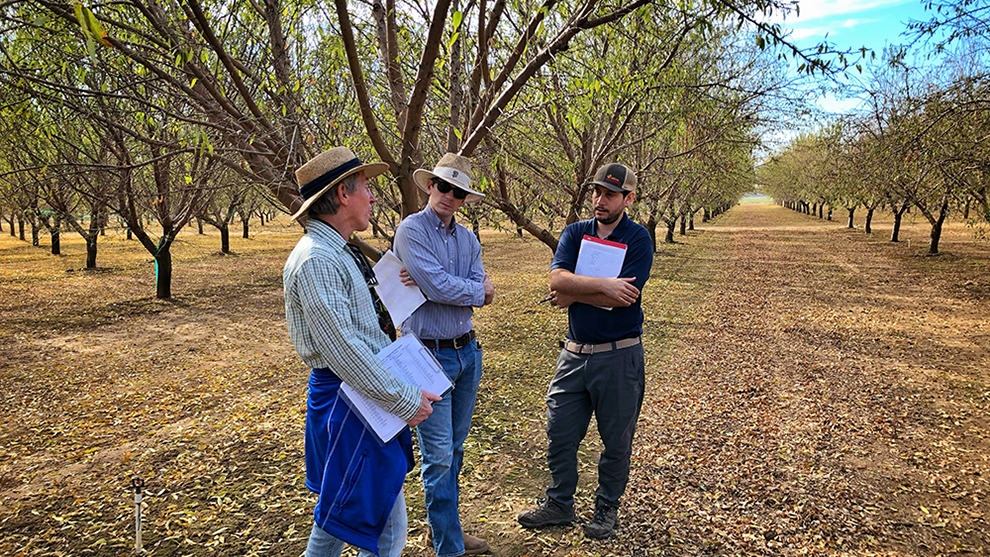 When one considers what irrigation will look like in the almond orchard of the future, it’s reasonable to expect that growers will rely as much on artificial intelligence as they do their own experience: In-field data on soil moisture and texture, spatial variability, and weather information collected by remote sensors or pressure chambers could be combined with aerial imagery that captures plant vigor or water stress to provide real-time analytics on an orchard. Similarly, computer algorithms could help growers make scientifically informed decisions about how much, at what frequency and where to apply water across the orchard.

This may sound like something from a futuristic movie, but many of those components are already accessible and being used today in orchards up and down the Central Valley. The key next step for the industry is to harness the technology and organize all the data so that growers can quickly act upon it. And, when it comes to water use, real-time data that informs fast action is a big deal.

With the sting of California’s latest drought still in memory and the state beginning to clamp down on groundwater use, maximizing every “crop per drop” of water has never been more important. This reality, in fact, helped propel the almond industry to announce its Almond Orchard 2025 Goals – one of which is to reduce the amount of water needed to grow a pound of almonds by an additional1 20%.

How tech can lead to new solutions

The rapid advancement of commercial precision farming technology – paired with an understanding of almond tree growth and what drives yield – is expected to lead to new irrigation solutions for growers.

“Smart irrigation management will consist of a combination of hardware and software that will allow almond growers to make precision irrigation decisions,” said Sebastian Saa, associate director of Agricultural Research for the Almond Board.

Saa and ABC’s Senior Manager of Field Outreach and Education Tom Devol outlined these advancements for growers within the next decade:

Devol said many growers already take advantage of the technology available today2, but that enhancements in software and standardization of some of the metrics will make it easier to aggregate and analyze the data.

“There are pieces of the larger irrigation improvement puzzle being implemented now in different forms,” he said. “For instance, remote imagery is becoming more common. There are a number of companies that provide that service – they send satellite images to growers every couple of weeks.”

Devol said growers developing new orchards – with brand new irrigation systems – are most likely to integrate new technology. Conversely, the cost of replacing already established micro-irrigation systems may be a financial disincentive for other growers, he said.

“What we’re looking to do is break the irrigation system into a grid of irrigation blocks,” Devol explained. “Then, we can choose where we deliver water to, using a software tool to help guide that decision. The goal is to have flexibility in to how to deliver water.”

The Almond Board of California (ABC) has been investing in irrigation-related research for nearly 50 years, recognizing and underscoring the role almond growers must play in sustainably managing water resources in the state. In the last five years, ABC has devoted almost $4 million to irrigation research, encompassing 21 projects (eight of which are ongoing).

Research funded by the Almond Board will be a critical factor in how irrigation in the orchard of the future evolves, Saa said.

“We will play a catalytic role, connecting the expertise we have supported through public sector research with the growing arena of commercial technology innovation,” he said. “We expect this to result in the development of better instruments, software and hardware that provide a more reliable and user-friendly experience by really understanding the almond ecosystem.”

ABC research builds on work that led to the creation of the Almond Irrigation Improvement Continuum, a comprehensive 149-page guide that outlines irrigation management practices for the almond industry. The Continuum also features an Irrigation Calculator, which is available to growers who participate in ABC’s California Almond Sustainability Program (CASP).

Saa said the grower-related data on irrigation techniques and water use provided through CASP is critical for researchers as well as the companies who make irrigation equipment. The data also influenced multiple discussions among ABC’s Irrigation, Nutrients and Soil Health Workgroup members, who identified several factors that must occur in order for the orchard of the future to take shape, elements that are outlined in ABC’s Strategic Plan on Irrigation:

ABC’s Irrigation, Nutrients and Soil Health Workgroup members charted a research path that focuses on ETa, the continued development and application on remote sensing technology and better ways to measure spatial variability (the difference in soil types) within an orchard.

The group also put a strong emphasis on better understanding almond tree physiology and pomology, wondering why, if the same amount of water should be applied to orchards of similar canopy size, one produces 2,000 pounds of nuts per acre and the other 4,000 pounds per acre.

“We would like to further explore this question from a physiological point of view in terms of how water use is driven by yield, without reducing the yield potential defined at fruit set, nor affecting the quality of almond buds for the subsequent season,” Saa said.

“We are also interested in finding the breaking point between tree water demand and the tree energy needed to support predicted yield early in the season. We envision that the results in this area will provide the means to make decisions on how much to irrigate given a certain crop load and thus translate into water-saving capabilities.”

Growers interested to learn more about the work of ABC’s Irrigation, Nutrients and Soil Health Workgroup are invited to attend an upcoming meeting. For meeting information, visit Almonds.com/Events.

1. Why “additional”? Over the past two decades, almond growers have successfully reduced the amount of water needed to grow a pound of almonds by 33% via improved production practices and adoption of efficient microirrigation technology. (Source: University of California, 2010. Food and Agriculture Organization of the United Nations, 2012. Almond Board of California, 1990-94, 2000-14.)
2. 2019 California Almond Sustainability Program (CASP) data.