Almond trees – like people – need carbohydrates to survive and thrive. New research funded by the Almond Board provides insight into how trees store and use carbs. 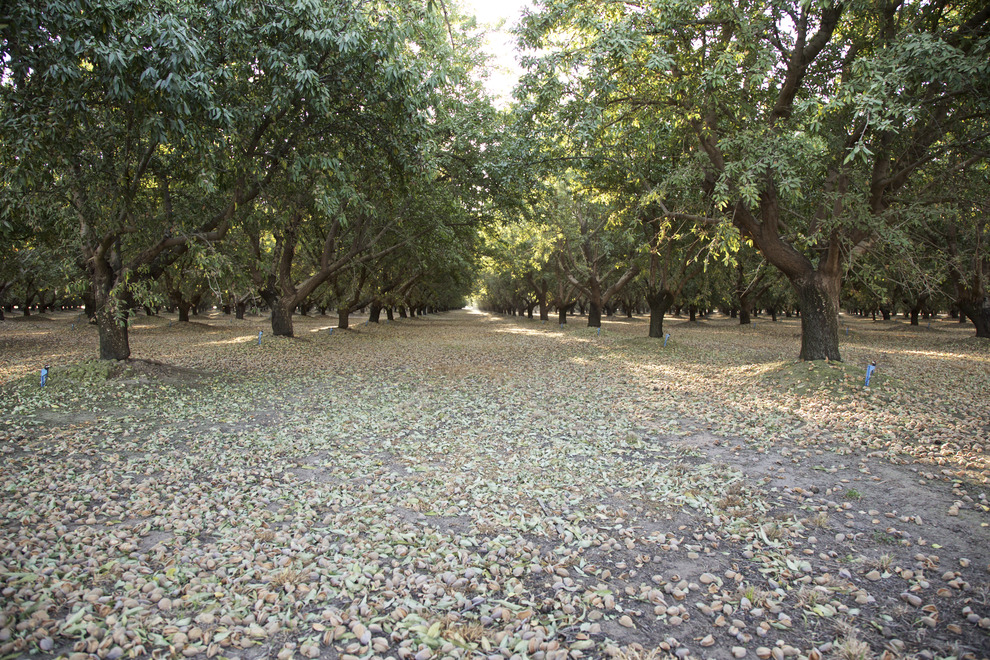 Carbohydrates are the main source of fuel for people. They allow our brains to think and our muscles to move. Composed of three key elements – carbon, hydrogen and oxygen – carbohydrates are an integral part of human physiology.

What some may not often consider is that plants need carbs, too, including almond trees, which use carbs to build structures like leaves, trunks, stems, seeds, roots and nuts – nearly everything!

The importance of carbohydrates to almond, pistachio and walnut trees is the focus of research conducted by Anna Davidson, Ph.D., and Maciej Zwieniecki, Ph.D., of the Department of Plant Sciences at the University of California, Davis. Beginning in 2016, data for their so-called “Carbohydrate Observatory” – the process by which these researchers gathered information from growers – was collected from about 550 orchards throughout the Central Valley. Growers, whom Davidson describes as “citizen scientists,” voluntarily sent monthly samples of bark and tree shoots to Davis to be analyzed.

Davidson said this research, funded by a grant from the Almond Board of California (ABC) and other organizations, allowed scientists to see “seasonal trends for multiple years in almonds, which gives us a sort of ‘X-ray’ vision into what’s going inside in the tree.”

Sebastian Saa, associate director of Agricultural Research for the Almond Board, said the new information will help address a “blind spot” in the understanding of almond trees.

“We knew that plants needed to store energy to bloom, to set fruit, to grow and for many other key phonological purposes,” he said. “Nutrients, irrigation, pruning and soil health all can affect how much energy the trees produce or store. But until now, we never had the ability to quantify the specific amount of energy needed for each of these very critical phonologic steps, and that is the main novelty that this project has brought to our industry, so far.”

The importance of carbs

To understand the critical role carbohydrates play in the production of nuts – and even an orchard’s yield – one first must understand how almond trees create and consume carbs.

Carbohydrates are formed during photosynthesis, when plants convert carbon dioxide from the atmosphere into a biologically usable form (carbs.) Carbohydrates can be either structural or non-structural. According to the UC Davis report “Carbohydrate Dynamics in Almond Trees”, structural carbohydrates like cellulose are used for building the plant, like constructing cell walls. On the other hand, non-structural carbohydrates, or NSCs, support trees in two main forms: sugars (glucose and sucrose) and starch (created when smaller sugar molecules are chained together for easier storage in plants or animals).

Davidson said that “starch and sugar are constantly being circulated throughout the tree, even during dormancy.”

The report shows that almond trees store and use – or “burn” – carbs at various times throughout the year. During bloom, the NSC reserves that allow trees to survive winter dormancy are significantly depleted, as they were largely used to help facilitate bloom. Post bloom, trees build up their carb reserves to allow for new growth and nut fill. Carbs levels then slowly decline throughout summer until harvest, when carb levels start to increase toward their fall peak – and then the cycle begins again.

To Davidson, one of the most exciting aspects of this research is the opportunity it presents to better understand the relationship between carb levels and orchard production.

For instance, preliminary results indicate that NSC levels in branches can impact future yields. Researchers have found that high levels of carbohydrates in wood and bark prior to dormancy and during bloom are positively correlated with higher yields. However, high yields are depending on the reduction of NSCs during the summer – when NSCs should be going towards nut fill – and healthy levels should be low. Subsequently, the following year’s crop depends on the amount of NSC reserves acquired post harvest.

“It’s important to understand that NSCs recover in the, fall post harvest, and that the amount of NSCs accumulated during that time is the amount a grower will have going into dormancy and into the following year’s bloom,” Davidson said. “Swings in winter temperatures and/or drought during the dormancy period will cause a need for trees to use those stored NSCs too early in the crop year, leaving less for bloom season and thus negatively impacting yield.”

Davidson said there are also varietal and geographical differences that impact carb levels. Early research shows NSC levels in trees increase the farther south you go in the Central Valley, a discovery attributed to warmer temperatures and a longer growing season.

Tree age also contributes to trees’ ability to store carbs. Not surprisingly, the report finds that older trees tend to accumulate much higher levels of carbohydrates in shoots at the end of the growing season, presumably reflecting their greater carbohydrate-producing leaf biomass and yield.

Despite the many interesting pieces of data analyzed so far, Davidson cautioned it’s still too early to make specific recommendations as to how this information should impact grower practices.

“We haven’t gotten far enough in our research yet to be able to answer the ‘How does this apply to how I manage my operation?’ question,” she said. “That said, perhaps once we have a more solid understanding of this research about NSC content during the post harvest recovery period, it may be incorporated into the list of characteristics people pay attention to when choosing the right rootstock and scion.”

Davidson said another important result of the research is the closer connection created between the citizen scientists (growers) and the scientific community. Growers who participated in this study have the ability to compare their data with other orchards up and down the state. That data may be viewed at this website.

“I think this research is exciting because we are on track to gain deeper carb insights that will provide growers with greater understanding of the health of their trees,” she said. “What’s more, we’ve already given growers the ability to track their NSC levels using our online platform and compare and observe orchards that may have certain nuances about them, thus making them at-home, or citizen, scientists.”

Saa said ABC plans to continue to invest in Davidson’s and Zwieniecki’s work. He said their research is one aspect of a much broader portfolio of research intended to broaden the industry’s understanding of almond production.

“With this research we have learned how to read the tree,” he said. “Now, we need to refine management practices. Right now we know more; the next step is to learn how to apply that knowledge to innovate and develop new management techniques.”