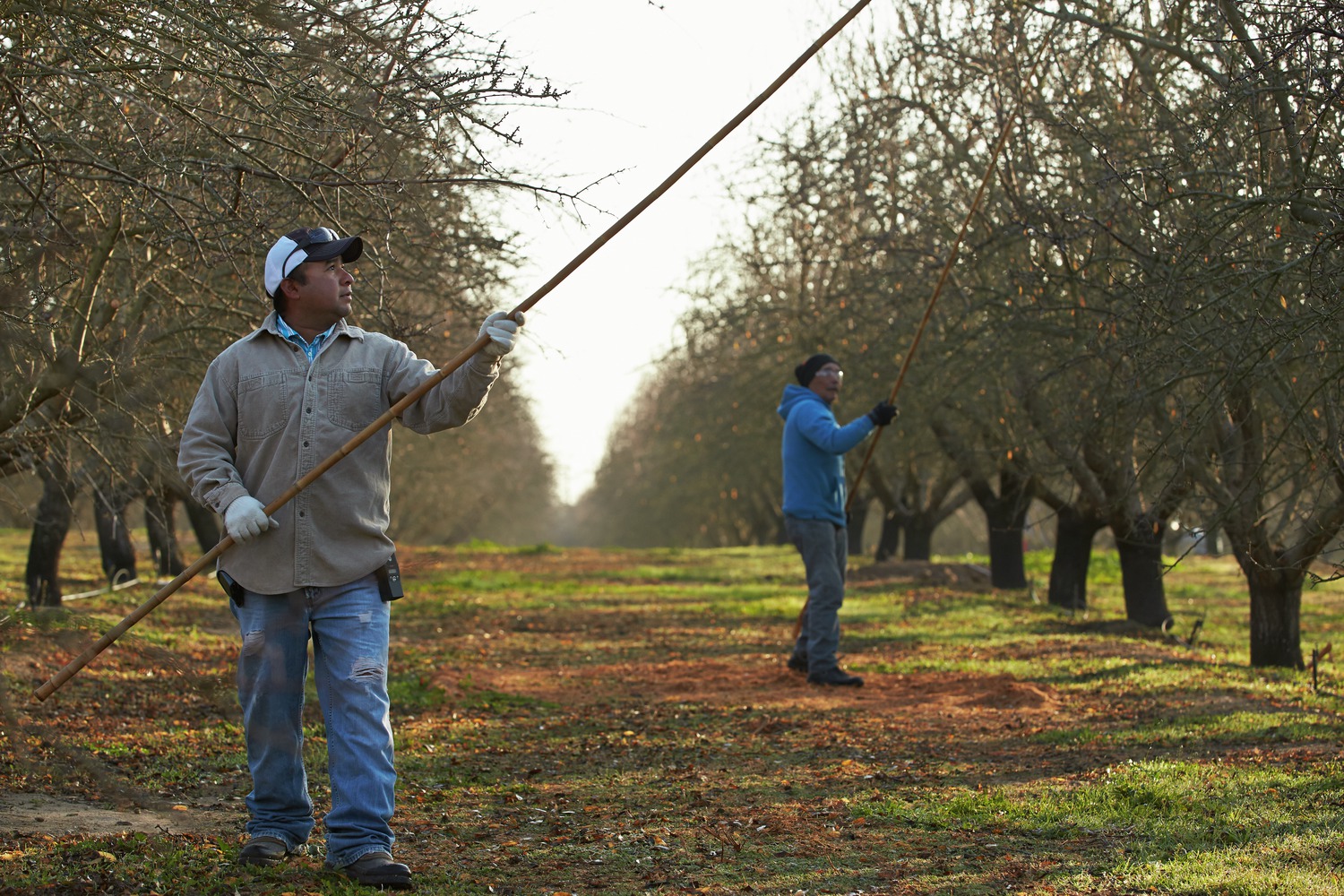 UC Cooperative Extension farm advisor David Haviland likes to equate winter sanitation to the beginning of a race. In his mind, now is the time for growers to get in the starting blocks. That means tuning up the equipment required to shake mummy nuts from trees and, if needed, having hand poling crews on standby.

Preparation is critical, Haviland said, so that “when Mother Nature gives us some rain and fog, growers can pounce on the opportunity.”

Research coupled with grower experience shows that ridding orchards of mummy nuts – the incubators for Naval Orangeworm (NOW) larvae – is one of the most important aspects of an effective Integrated Pest Management (IPM) program. The best time to knock mummy nuts to the ground is when they’re wet due to a rainstorm or from soaking up moisture from foggy days and nights. In both instances, the water content adds weight to the nuts and the moisture weakens the nuts’ attachment to the trees, making them more likely to fall.

With recent rains throughout the growing region, and fingers crossed for more to come, it's important that growers be prepared to act when the conditions are right. The scenario no grower wants is to still have mummies on the tree deep into January, right before bud swell occurs, as conventional wisdom states that shaking and hand poling at that time can negatively impact next year’s crop. Still, ongoing research seeks to learn more about the impacts of later sanitation efforts.

“Sanitation is the key to mitigating NOW. Notice I’m not saying control,” said Mel Machado, director of Grower Relations for Blue Diamond. “Once on the ground, you want to destroy them with prejudice.”

All almond varieties – hard as well as soft shell – can provide a winter home for NOW larvae. An accepted industry standard is to have no more than two mummies left on any tree, though Haviland, based in Kern County, advises growers in the southern part of the San Joaquin Valley to aim for one mummy for every two trees.

Machado said early reports this fall state that NOW-related rejections from the processor typically were less than 2 percent – an acceptable level for most growers. He said there were areas in Northern California that were hit harder by NOW this year because last winter was so wet that, in some cases, growers couldn’t get their machines into orchards to shake mummy nuts because the ground was too muddy and slippery.

This year, in the San Joaquin Valley, Haviland said the areas with the largest NOW populations are in the south and west.

Still, even growers who are experiencing minimal NOW-related rejects are forewarned against complacency.

“Don’t rest on your laurels because you had a good year in terms of losses. Don’t think, ‘I’m under 2 percent, I’m good.’ Don’t sit back and think you can coast,” advised Machado. “You need to ask yourself, ‘How did I get here?’ and then you need to continue to do that practice, or those slew of practices. And remember, you’ve got neighbors who might not be in as good of shape as you.”

Reducing mummy nut levels to lower overwintering NOW populations is a key part of the almond industry’s Almond Orchard 2025 Goal focused on Integrated Pest Management (IPM). Progress towards this goal will be measured by grower adoption of IPM techniques. In the case of winter sanitation, an effective NOW IPM program may include spraying, mating disruption and proper harvest timing. While each of these practices has a cost, experts say that price is well worth it.

“We know sanitation is the opportunity to reset the clock on NOW, but it can also be very expensive,” said Haviland, referring to the cost of hiring crews to pole trees by hand or make multiple passes with shakers through orchards.

Machado agreed, but said that “when you look at the cost of rejects the following fall, winter sanitation is worth it.”

To learn more about the costs of NOW damage, check out this presentation given by Machado and other key industry members at the Navel Orangeworm Summit hosted by the Almond Board of California in June 2019.