Beginning July 1, California enacted new rules covering anyone working in an agricultural setting between sunset and sunrise. What should almond growers know? 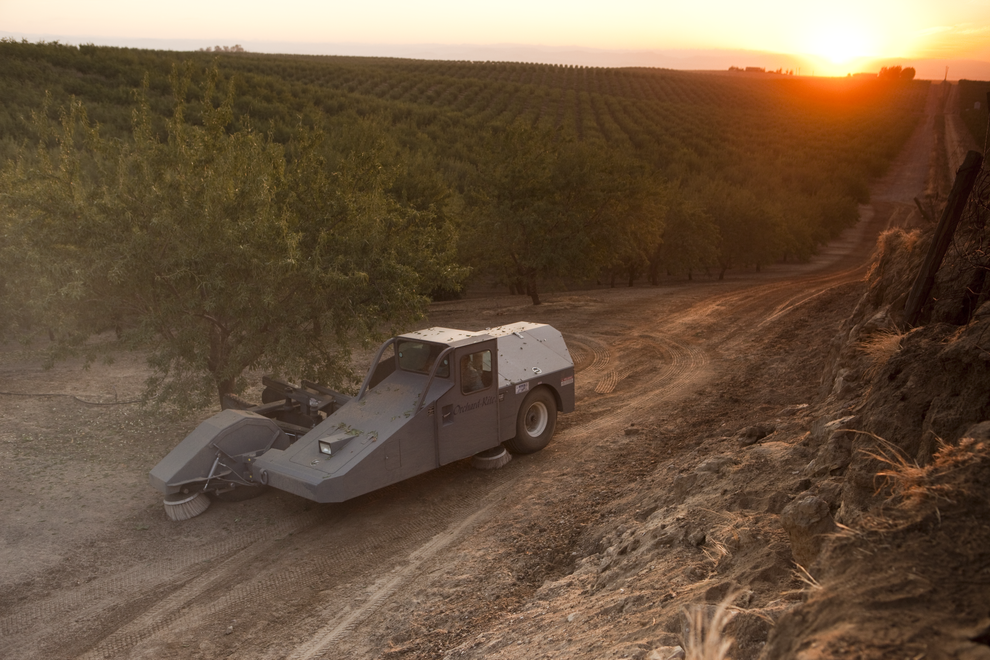 During the hot summer (and early fall) months, almond growers, farm managers and their crews aim to start work before the sun comes up and save additional tasks for after sunset in order to beat the heat. While some level of additional lighting has been the norm during those early morning/late evening hours, as of July 1 the State of California is enforcing new safety regulations that specifically govern how much lighting is required and the kinds of reflective clothing needed to protect anyone working at night1 in an agricultural environment.

This new rule, formally known as the Outdoor Agricultural Operations During Hours of Darkness rule, was developed by the California Division of Occupational Safety and Health (Cal/OSHA) with input from multiple ag industries, including almond growers.

“This thing has been in the hopper since 2013, so it shouldn’t come as a surprise. Having said that, it hasn’t actually been ‘business as usual’ the past few months,” said Amy Wolfe, president and CEO emeritus of AgSafe, a Modesto-based nonprofit that has provided practical health and safety education to the agricultural community since 1991.

Wolfe spoke about the new lighting regulations and their impact on growers at The Almond Conference 2019 in Sacramento. She outlined three specific areas that growers must be aware of:

Though she couldn’t recall a specific instance of a night-time worker being injured on the job in the almond industry, Wolfe said instances of employees being hurt in other ag sectors by trucks and other equipment inspired the new rules. As such, as the almond industry looks ahead to harvest, it’s imperative that growers and custom harvesters not only understand the new rules but also put a plan in place to follow them – a plan that takes into consideration the new required trainings and, at its core, prioritizes employee safety.

Wolfe explained that the new rules include a matrix detailing how much lighting is mandated depending upon the task. She said that lighting is measured in candle feet, which defines the amount of light in a 360-degree circle from where someone is working. Cal/OSHA specifies that light measurements are recorded 30 inches off the ground.

Wolfe said that lighting can be provided through a combination of stationary lights brought into an orchard, headlights on vehicles and personal lighting such as headlamps on hard hats.

“If you’re a prudent, thoughtful grower, you’re going to buy a light meter and go out and check to make sure the steps you’ve taken to mitigate this risk are working,” she said.

Cal/OSHA has approved the use of light meters provided by three different companies  – Davis, SPER and Extech.

Reflective clothing a must

The rule also requires growers to provide workers with any personal protective equipment they need when working at night. Such equipment may include hardhats with lamps or Class 2 high visibility reflective clothing such as shirts, vests and jackets.

Any vehicles that will be used at night – trucks, tractors, forklifts, sweepers, ATVs and UTVs – must have proper headlights and taillights.

Wolfe said training is a major part of the new night-time regulations. Before each work shift begins, employers are required to ensure that employees know where drinking water is stationed; what areas are designated for hand washing, rest and meal breaks, and parking; and what hazards exist (canals, irrigation equipment, roads, and areas where trucks and equipment might be, as well as their traffic patterns).

“You must call attention to specific locations on the property,” Wolfe said of the safety training. “It’s is all about the parameters in which people are supposed to stay and where equipment is supposed to be.”

Cal/OSHA has the authority to make unannounced inspections of workplaces to see if the new regulations are being followed. Wolfe said fines start at a few hundred dollars per violation per worker per shift – meaning they could add up quickly for growers out of compliance.

To help growers understand and comply with this new rule, AgSafe created a training video that should become available on their website on July 15. Also on their site, AgSafe provides growers with forms they can use to document which employees worked each night, when their shifts began and ended, and what tasks they performed.

Growers with further questions should contact Angelina Ceja, AgSafe’s director of education, at Angelina@agsafe.org or (209) 526-4400, ext. 404.

1“Night” is defined as “after sunset and before sunrise.”