AgIS Capital manages more than 25,000 acres of farm properties in three states, including California. It’s an employee-owned firm that works with investors who share its philosophy about value creation in the agricultural sector.

In the past few years, AgIS Capital has planted cover crops at many of its California orchards. The company expects cover crops will improve the long-term conditions in the soil while also creating habitat for honey bees and other native pollinators – something that is growing in importance with many consumers.

“This is a newer thing for us,” explained Carl Evers, AgIS Capital’s director of sustainability, on a recent episode of the “Almond Journey” podcast with Tim Hammerich. They were joined by Jeremy Olday, one of the company’s farm managers. 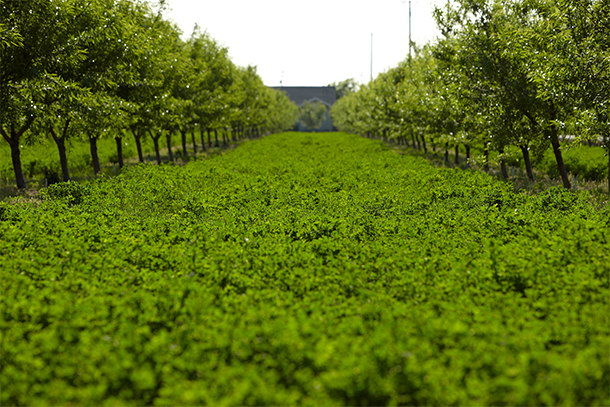 AgIS Capital was introduced to cover crops through the Seeds for Bees program sponsored by the Almond Board of California and Project Apis m., which funds and directs research to enhance the health and vitality of honey bee colonies while improving crop production. Since 2006, Project Apis m. has invested $8.5 million into bee research and $2.9 million into forage programs. It also offers financial incentives to growers willing to plant cover crops in their orchards or fields.

Evers said the availability of free seed and practical advice from the Seeds for Bees program was one of the reasons the company decided to try the practice.

“You have all the soil and atmospheric benefits that our industry is embracing around cover crops,” he said. “But then you look at almonds, specifically, and the importance of having healthy pollinators on the site. And not just the imported bees that you’re renting, but whatever native population you can build up is also incredibly important. So when there’s a program where those can work together and complement each other, it starts to make a lot of sense."

Olday said AgIS Capital first tested cover crops on about 3,000 acres of almonds and walnuts planted in heavy soils in Colusa County. The primary goal was to improve water infiltration into the ground.

“Seeds for Bees makes it really easy,” he said. “They offer a variety of mixes, depending on what you want to try and accomplish – whether you want to build soil or you want different flowers with different pollens and proteins to encourage bee activity.”

The company has since added cover crops to a portion of the 800 acres of almonds and walnuts it manages in Sutter and Placer counties. Again, the goal was to increase water infiltration on mostly clay soils.

Evers said the results so far with cover crops have helped him overcome some of his initial concerns.

“I grew up thinking about keeping orchard floors clean. Keep everything short and you either spray them down or float them out before harvest,” he admitted. “But in fields where we’ve implemented cover crops, we’ve found that if managed right, that root mass really holds that ground together when you’re going through harvest activities.

“So, one, you’re not beating up your equipment picking up soil and sand, but, two, you’re also emitting a lot less dust through your harvesting process, which obviously from an air quality standpoint is great. But then, just from a productivity and worker safety standpoint, the fact that you’ve got better air to breathe and you can see what’s going on around you, was really great.

“Unless it was poorly managed, there were no horror stories of all this trash to work through and a bunch of weeds getting in with the almonds.”

In addition, Evers said cover crops sped up how soon workers could get into the orchards after the wet season while reducing soil compaction on the orchard floor.

The introduction of cover crops is consistent with AgIS Capital’s core values, which equally balance economic, environmental and social objectives. Based on the company’s experience, Evers encouraged other growers to consider cover crops.

“Because the first year doesn’t always work out perfectly, but you have a safety net with some of the financial incentives," he said.

Listen to the full Almond Journey Podcast with AgIS Capital below.