Paul Lum has achieved many things during his long career growing almonds in Solano County, but it’s the impact he’s had away from his own orchard that led him to being honored with the Almond Technical Achievement Award in December at the 2023 Almond Conference. 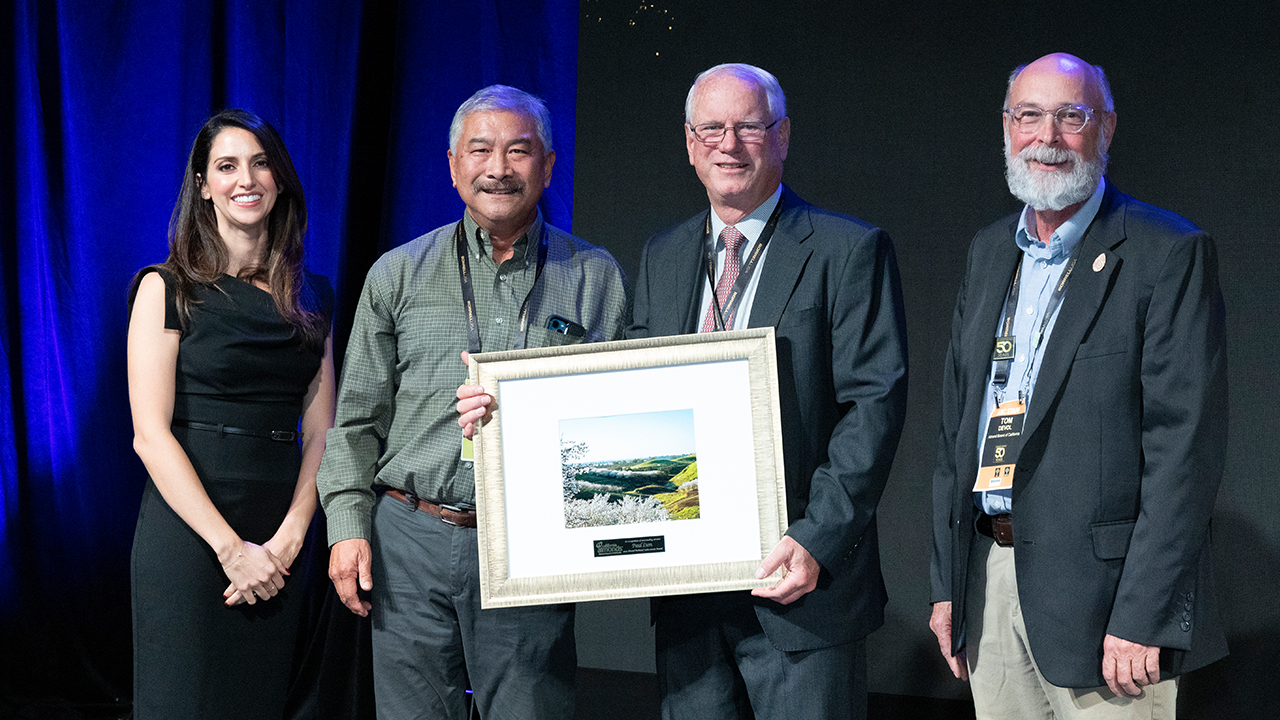 Almond Board CEO Richard Waycott described Lum’s many abilities this way before he welcomed him to the stage to receive his award:

“In a humble, understated way, he leads, learns from and trains farmers, landowners, service providers and more in all things farming, naturally and effortlessly pivoting from topics on irrigation equipment to agricultural conservation easements to financial decision making to conservation practices. He has an appetite for learning from farmers and others he works with so he can share with others.”

Tom Stein of the American Farmland Trust nominated Lum for the Almond Technical Achievement Award. He called his friend “the real deal” and a true “gem.”

“Over the years, Paul’s efforts have helped countless growers improve their operations, the environment and their bottom line; ground-truthed, published and promoted successful cost-effective conservation practice adoption; mentored, trained and supported the current and next generation of farmers and service providers; and enhanced the capacity and functioning of various ag-serving organizations that will carry the California almond industry for years to come,” Stein wrote.

Tom Devol, senior manager of field outreach and education for the Almond Board, singled out two recent projects in which Lum’s expertise and influence were critical.

The first is a soil health calculator created by AFT to help quantify and measure the impact of cover crops to improve orchard yields and profits, soil quality, pollinator habitat and the environment. Lum and his team worked with the Almond Board of California to test the tool through several case studies. The group is also currently working on adapting the tool to provide the same quantification towards irrigation practices to bolster ABC’s Almond Irrigation Improvement Continuum.

The second example involved another case study of four methods to evaluate the economic, water quality and climate outcomes experienced by “soil health successful” row crop farmers and almond growers. It led to the creation and publication of a soil health tool kit in September 2022.

“Paul’s been an instrumental part of that,” praised Devol, who has known Lum for more than 30 years and remembers how much praise growers had for him when he worked at the Solano Irrigation District.

“I was amazed by the growers’ comments about the support he gave them,” Devol said. “He truly had a heart of service and he wanted to see the best for these growers. And they just loved him.”

Lum said he was “flattered” to receive the Almond Technical Achievement Award. In his brief remarks on stage, he humbly said he is no different than so many others in the almond industry who continue to teach him.

“When I registered for this convention and walked through the doors,” he said, “I think of folks I can learn from. I’m very honored and very surprised by this recognition.”