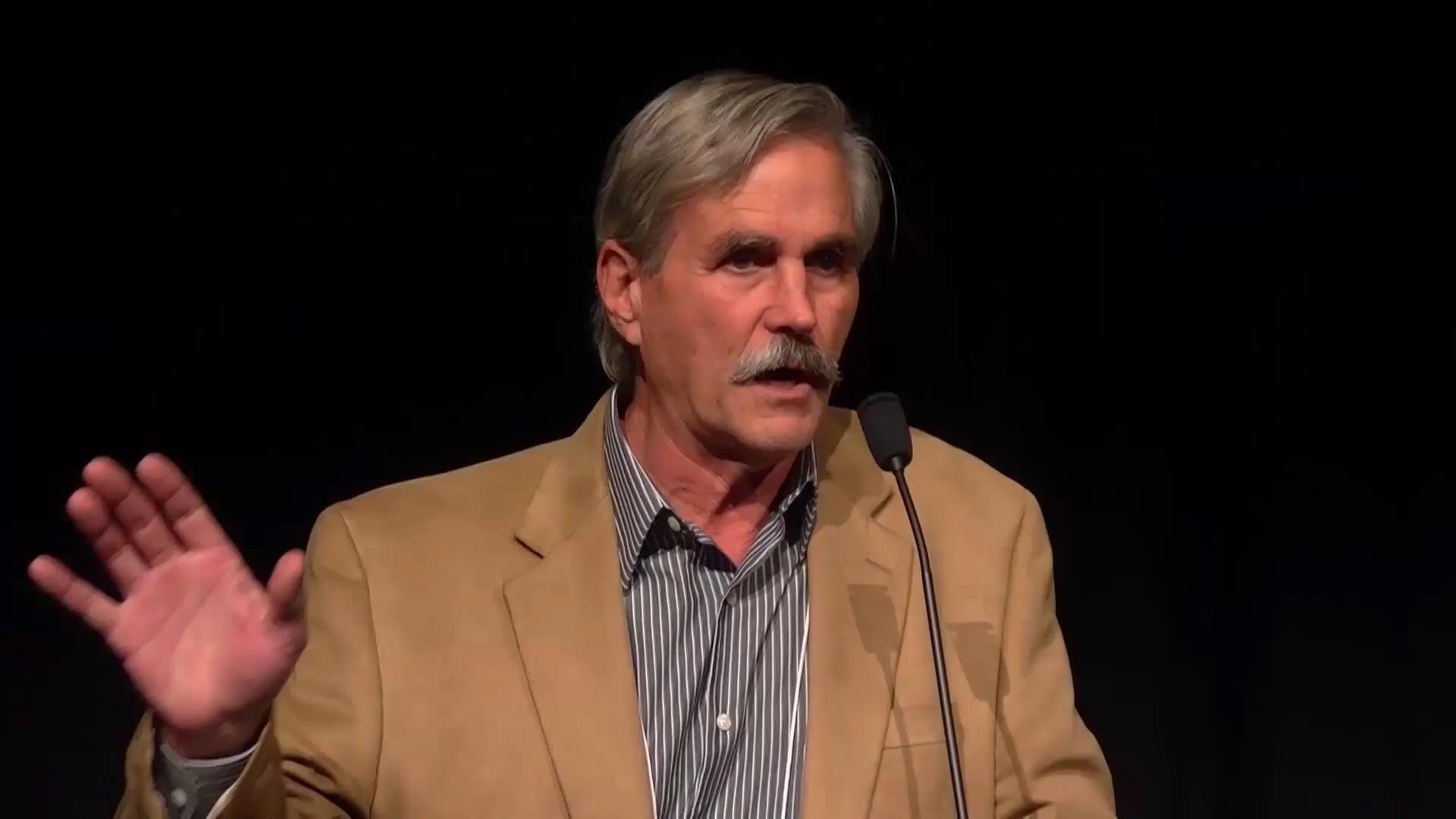 Blake Sanden is celebrated in the California almond industry as being the man who convinced growers in the Southern San Joaquin Valley that they were underwatering their trees – and losing production because of it.

It may seem crazy that what is now common knowledge – applying more water can increase yields and reduce the amount of water per pound of almonds – was once a controversial idea, but persuading longtime growers that their trees were chronically thirsty wasn’t as simple as it sounds. Sanden, who recently was honored with a prestigious award by the California Chapter of the American Society of Agronomy, recalls that he had just gotten out of grad school at UC Davis in 1988. He had been hired as the irrigation manager for Paramount Farming, which had acquired almond orchards in southwest Kings and northwest Kern counties. Sanden’s job was to schedule irrigations and do system evaluations on 26,000 acres of almonds, pistachios, olives, grain and cotton.

At the time, the average yield statewide for almonds was about 1,300 pounds per acre. But in the arid Southern San Joaquin Valley, yields often were less than that and Sanden thought he knew why.

“By mid-May, my soil probing is telling me I am already losing significant soil moisture storage that is not being replaced by irrigation and by the time we hit irrigation cutoff for harvest we would have major defoliation,” Sanden recalled. “I had a serious conversation with the ranch managers (who are basically plant and equipment guys) to reveal my findings and I told them I want to increase the normal irrigation depth by 15%, but since they are the ‘almond experts’ and I’m just the soil and water guy fresh out of UC Davis graduate school, what do they think?

“Their response (and this is a literal quote as best as I can remember): ‘You dumb water boy, almonds defoliate naturally during harvest!’ Duh, any tree defoliates ‘naturally’ when it runs out of water.”

That experience left an impression on Sanden, who four years later became the UC Extension Soils, Water and Agronomy Farm Advisor for Kern County. Until his retirement in 2018, Sanden “was the backbone of the UCCE soils and water program in the Southern San Joaquin Valley,” praised Bob Beede, a longtime colleague of Sanden’s in Kern County.

During his career, Sanden was intimately involved in water- and soil-related projects not just in almonds, but pistachios, alfalfa and other crops. He helped introduce microirrigation systems into orchards. He participated in multi-year research efforts that led to the creation of nitrogen guidelines for almonds. He worked on projects involving root stocks, especially those that would help pistachio trees thrive in the salty soils in the Southern San Joaquin Valley.

But the lessons learned from that dusty summer in 1988 never left Sanden. He remained curious about the water needs of various crops in his region. So, he helped install a network of soil moisture sensors in 145 fields covering more than 12,000 acres belonging to 33 different growers representing 14 different crops. From 2002 to 2013, Sanden and his team collected data measuring water use efficiency in those plants.

For almonds, the results from 2002 to 2005 showed that – just as Sanden had sensed years before – trees in the Southern San Joaquin Valley were chronically underwatered. Whereas trees in rainier, cooler parts of the San Joaquin and Sacramento valleys were fine with 42 inches of water per irrigation season, trees in the hotter, drier south needed as much as 50 inches to produce at an optimal rate.

The result of Sanden’s findings? Many growers started to put more water on their trees. And average Kern County almond yields increased by 65% between 2002 and 2011 compared to the previous 15 years.

“ Blake's most significant accomplishment was to change a dream of 5,000 meat pounds per acre into reality.

“He was a champion on re-evaluating the water requirements for almond trees, which prior to his investigation was too little,” said Bob Curtis, the retired former director of agricultural affairs for the Almond Board of California.

‘A true leader of the industry’

In addition to his impact on almonds, pistachios and other crops, Sanden is known as a tireless worker. He frequently could be found in fields and orchards during the harvest seasons, earning the respect and trust of farmers.

“Blake is incredibly dedicated to the goals of bettering California agriculture,” said UC Professor Patrick Brown, who worked with Sanden on nitrogen research projects. “He is always extremely helpful, extremely knowledgeable and practical in his advice and in his assistance. He's a true leader of the industry and an example of agriculture extension at its very best.”

Sanden also developed a reputation as a role model for younger UC ag employees, especially those in Kern County.

“While there is no doubt that Blake had a big impact on California growers, he also had an impact on new farm advisors, including myself, as he was always there to help and transfer his knowledge and experiences to us as we started our new job as farm advisors,” said Mohammad Yaghmour, the UC Agriculture and Natural Resources farm advisor in Kern County for the past six years.

In his presentation to the Agronomy group recounting Sanden’s career, Beede estimated that Sanden had given hundreds of presentations to growers and others. He credited Sanden for forging important partnerships with farmers that allowed key research projects to go forward. Sanden also has served on dozens of boards and committees dedicated to improving agriculture in California.

“He has authored 16 peer-reviewed publications during the latter half of his career, as well as scores of technical and county-based research reports, detailed newsletters and a comprehensive website filled with how-to information,” Beede added.

Sanden, who moved to the Sacramento area after he retired, keeps his hand in ag affairs by working as a consultant, including clients in Afghanistan and Armenia. He also contributes to various UC projects involving refinement of almond, citrus and pistachio ET/Kc numbers on a paid and advisory basis.

Because of the COVID pandemic, the American Society of Agronomy’s convention in early February was held via Zoom. Sanden was not able to be celebrated in person, but still has received plenty of well-earned congratulatory phone calls, texts and emails.

“I was very humbled to be honored by this great group,” he said.

Topics: About the Almond Industry, Water