Cover crops provide multiple benefits in an almond orchard. In addition to providing a healthy food source for pollinators, they also can help growers deal with challenging soil issues, including compaction. 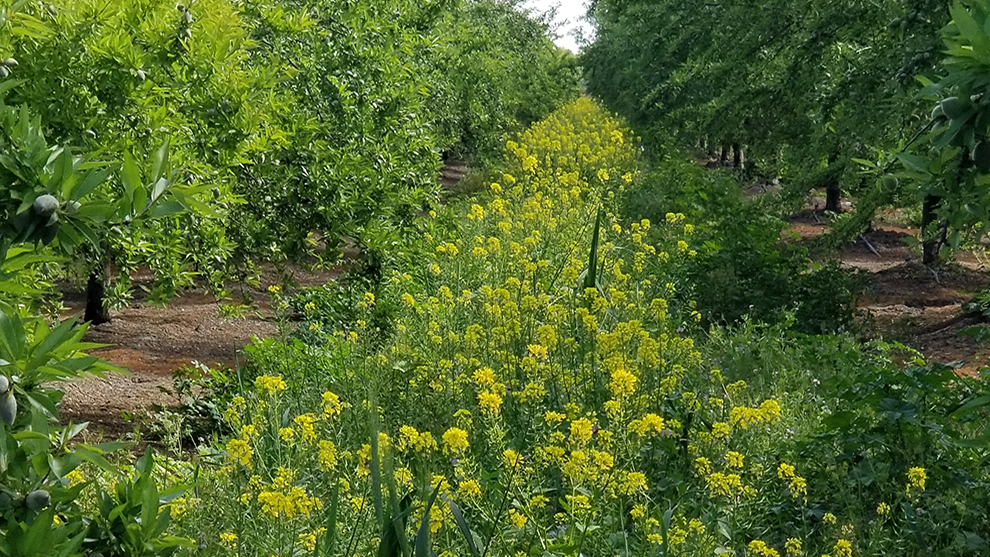 For the third year in a row, Chris Rishwain is preparing to plant cover crops in the windrows of his 150-acre almond orchard near Manteca. Although his original intent was to provide forage for honey bees during pollination, Rishwain has discovered multiple additional benefits to cover crops, one of the most impactful being the positive effect they have on compacted soil.

“Soil compaction has been a problem for us,” Rishwain explained. “My goal to reduce soil compaction is aimed at helping improve the orchard’s water retention, allowing the roots of our trees to penetrate deeper in the soil to obtain water and minerals, and also to allow for better soil aeration, which supports the microbes in the soil.”

Like many other almond growers, Rishwain just completed harvest, a time when shakers, sweepers, tractors and other heavy equipment can contribute to pre-existing issues of soil compaction in orchards up and down the Central Valley. Compaction also can be a greater problem in soils that have more silt.

Soil compaction – coupled with other contributing factors – can negatively affect tree development and subsequent tree productivity. While there is work that can be done to prevent or decrease the severity of soil compaction before trees are planted in an orchard, once an orchard is established those options become more limited. That’s where cover crops can help.

The Almond Board of California (ABC) continues to fund research into the impacts of cover crops. Much of that scientific work has been conducted by a team led by Amélie Gaudin, Ph.D., an associate professor of agroecology in the UC Davis Department of Plant Sciences, as well as researchers from UC Riverside.

“The most noticeable benefits have been in terms of an increase in infiltration of rainfall and irrigation water, winter weed control and decreasing compaction and increases in yields,” Gaudin told AgNet West earlier this year. “We haven’t noticed any difficulties at harvest, which is promising for adoption for this practice on a wider scale.”

One of Gaudin’s research sites includes a 12-leaf orchard that originally had extremely compacted soil but experienced a 200-pound per acre yield increase in year two of the three-year cover crops research trial. According to AgNet West, “Gaudin noted that [the yield increase] was more an indirect result of the cover crop that was planted due to the soil compaction, but it still highlights the potential that cover crops present.”

“The seed mixes available through Seeds for Bees are designed to bloom at critical times of the year when natural forage is scarce but managed and native bees are active,” said Billy Synk, the organization’s director of pollination programs.

Through the Almond Board’s Bee+ Scholarship Program, 100 almond growers can receive up to $2,000 each in FREE cover crop seed through the Seeds for Bees program. Funding provided by ABC’s Bee+ Scholarship will allow growers to plant an estimated 3,500 acres of quality pollinator forage statewide – that’s in addition to the cover crop seed Project Apis m. typically distributes directly to almond growers through their Seeds for Bees program each year.1 Applications are being accepted now, so growers are encouraged to visit Almonds.com/Pollination to learn more.

Rishwain started participating in the Seeds for Bees program two years ago. He planted Project Apis m.’s Soil Builder mix, which includes brassicas, legumes and grains. In addition to the cover crops’ positive impact on honey bees, he also likes this mix because of its combination of shallow hair-like roots that help prevent erosion in addition to strong tap roots that grow deep into the soil, breaking up compacted areas.

“I will use this mix again this coming year. I liked how it has a diversity of species that can improve soil health in our orchard in many different ways,” said Rishwain, adding that the experts from Seeds for Bees make choosing the right seed mix easy for any orchard situation.

Synk said the most popular Seeds for Bees seeds mix that growers typically use to deal with compacted soils is the Mustard mix, which includes canola, white mustard, two kinds of yellow mustard and Diakon radish.  He also said 75% of Seeds for Bees participants list breaking up compacted soils as one of their primary reasons to plant cover crops.

Similarly, Gaudin’s research shows that a mixture higher in legumes (such as clover and vetch) can boost nitrogen levels in the soil; conversely, grasses can help reduce nitrogen losses, decrease compaction and improve water infiltration.

Typically, cover crops are planted in the fall – after harvest – and sprout naturally following the first rain of the new crop year. Their flowers provide additional forage for honey bees when almond trees are in bloom and their roots add organic material to the soil. The cover crops are then typically mowed down in late spring so orchard floors can be readied for harvest later in the year. Rishwain also uses a conditioner before harvest to filter out organic debris.

Josette Lewis, Ph.D. , the Chief Scientific Officer for the Almond Board, said the organization expects to publish a practical guide on best management practices for cover crops at the start of 2021. In the meantime, growers are encouraged to participate in the Almond Board’s Bee+ Scholarship and visit the Seeds for Bees website to learn more about the benefits of planting cover crops in or near their orchards.