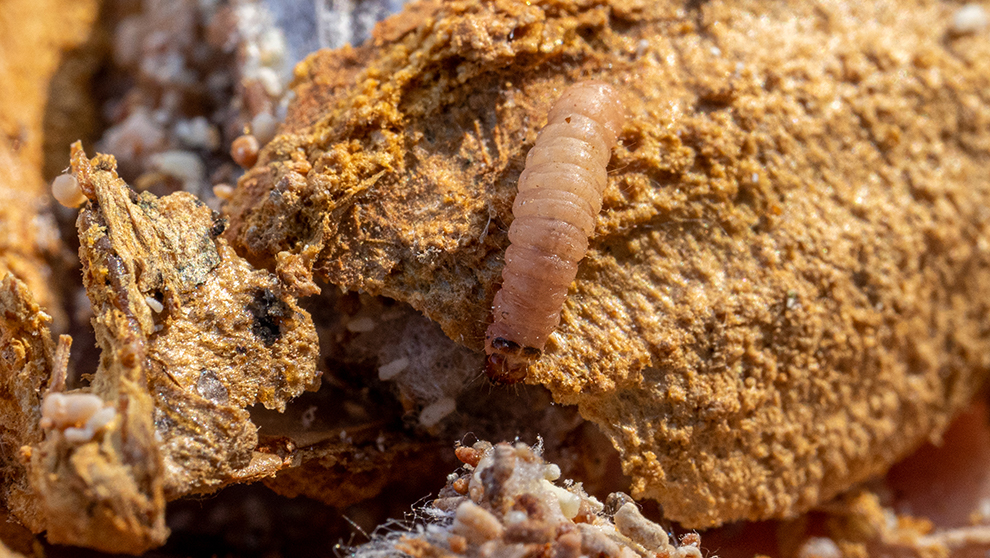 Navel orangeworm (NOW) damage often delivers the single largest pest headache for growers: NOW eggs laid on nuts hatch into larvae and can lead to an increased risk of aflatoxin residue and nut damage, which can also lead to lower grades and ultimately lower payments to the grower.

Two recently published research studies show that almond growers who add mating disruption into their Integrated Pest Management (IPM) strategy to fight NOW may be able to both reduce the number of times they spray in a season and improve their bottom line. In most cases, the investment in equipment that interrupts the mating cycle of NOW moths more than pays for itself with quantifiable reductions in kernel damage.

Mating disruption involves the use of manufactured pheromones that imitate those used by female moths to attract male moths. The pheromones can be introduced to the orchard via strips placed in trees (roughly 18 to 25 strips per acre) or by hanging dispensers (one per acre) that release pheromone from aerosolized cans. Some of the more sophisticated – and expensive – mating disruption systems include camera traps and weather stations that are used to further refine the timing of the release of pheromone to when the pests are most active.

Navel orangeworm larvae overwinter in mummy nuts and then become adults in the spring, when they begin reproducing. Each generation of adults is called a “flight.” Typically, there are up to four flights during one almond growing season, and historically growers have timed sprays to the period of time that adults in each flight begin to lay eggs.

Senior Specialist in Pest Management at the Almond Board of California (ABC) Drew Wolter said mating disruption can provide an additional layer of protection for growers who rely on spraying.

“If you’re just spraying, the chance of hitting every moth is pretty low – the moths are still mating, and they’re still laying eggs,” he explained. “Mating disruption allows you to reduce the population size at the first, second, third and fourth flight.”

In 2017 and 2018, University of California Cooperative Extension (UCCE) entomologist and farm advisor David Haviland and his team conducted ABC-funded research that provides quantitative estimates of the impact of mating disruption on NOW management. The first study evaluated the impact of four different mating disruption systems on NOW trap captures and damage. The second study used nine sets of paired orchards, ranging in size from 40 to 100 acres, to compare the impact of traditional insecticide programs with and without the addition of mating disruption.

In addition, researchers discovered a sharp reduction – as high as 94% – in the number of male moths caught in pheromone traps in the orchards using mating disruption.

“That number is massive,” Wolter said. “It means mating disruption confused males to the point that they didn’t mate, which leads to a decreased population.

“With mating disruption, you’re putting out so much of this sex pheromone that the male moth simply cannot find the female – it doesn’t get to procreate and dies out, meaning there are fewer eggs that turn into the next generation. Generation by generation, their population declines.”

Haviland’s research shows that mating disruption is effective across many almond varieties, reducing NOW damage by 65% and 78% in the Nonpareil and pollinizer cultivars, respectively.

A full version of the study report and additional findings may be viewed in the February 2021 issue of the “Journal of Economic Entomology.”

“In general, NOW mating disruption in almonds can currently be viewed as an insurance policy against high losses from NOW,” the report states. “These results suggest that adding mating disruption to an existing navel orangeworm management program can be a cost-effective way to reduce damage while promoting sustainable management practices.”

Bradley Higbee and Charles Burks authored the second NOW-related research study that was recently released, which appears in the February 2021 issue of “Insects.” Higbee is a research and development manager at Trécé Inc. in Adair, OK. Burks is a research entomologist for the U.S. Department of Agriculture Agricultural Research Service in Fresno.

Their research was conducted between 2006 and 2015 in an almond orchard of more than 2,000 acres in Lost Hills. The orchard varieties include Nonpareil, Monterey, Butte, Carmel, Fritz, Mission, Price, Ruby and Wood Colony. Intense winter sanitization was practiced in all blocks of the orchard, including machine and hand removal of mummy nuts and flail mowing.

Higbee and Burks found that “blocks treated with both mating disruption and insecticide had lower damage than those treated with either alone in nine of the 10 years” those orchard blocks were studied. In many years, the kernel damage was cut in half.

This graph summarizes the research findings from Burks and Higbee’s research. 2

“The fact that this study covers a 10-year span gives you a sense of the variability of high-pressure years and low-pressure years from navel orangeworm,” Wolter said. “There was a clear difference in combining mating disruption with spraying.”

Wolter said for growers who often spray for NOW multiple times a year, a sound mating disruption program has the potential to eliminate treatments. Current research shows mating disruption can reduce the number of male moths caught in traps by 93.5%

“A proper mating disruption program is not intended to take away all spraying but could reduce the total number of sprays in a season,” he said, suggesting spraying is especially important at hull split when nuts are most vulnerable to egg-laying moths.

In this study, doubling the number of mating disruption devices usually resulted in lower damage, but there was not always a statistical difference, which suggests that the amount of pheromone needed to disrupt a particular orchard depends on the number of NOW in the orchard. Current formulations are different from those studied from 2006 to 2015, but the results of those studies underline the importance of not using less than the label rate even though trap suppression occurs at lower rates.

Consider mating disruption for your operation

A survey conducted by UCCE farm advisor Phoebe Gordon shows that nearly two-thirds of growers (62%) said they have never used mating disruption as part of their NOW management program, though most have employed winter sanitization (91%) and used pheromone traps (69%) to gather data on the moth population in their orchards.

“A sound NOW IPM program should have three fundamental in-season components,” he recommended. “Between those three components, growers can track NOW flights and associated population size. Tracking NOW pressure, in turn, provides growers with a decision-making tool regarding if and when they should spray.”

Kern County almond grower Kent Stenderup began using mating disruption three years ago in his orchards and is convinced of its value.

“We have mating disruption in three fields at this time,” he said. “The practice continues to prove itself and we’re adding acres as we go.

“The bottom line is our handler is happier and so are our books.”3

Wolter said the Almond Board is in the early stages of producing a short video with Haviland in which the researcher and farm advisor will explain how mating disruption works and offer growers a chance to assess its potential use in their own orchards. This video will be released in late spring/early summer.

Navel orangeworm is one of the key pests that industry members are dedicated to responsibly combat as part of the Almond Orchard 2025 Goal to increase adoption of environmentally friendly pest management by 25%. For more information on the 2025 Goals and to learn what practices within the goals may work for your operation, visit Almonds.com/Goals.

1 According to researchers, “The economic analyses showed that increases in crop returns exceeded the costs of implementing mating disruption systems with the break-even point ranging from 0.86 to 1.06% of kernel damage.” Read the entire study, published in the Journal of Economic Entomology, at https://doi.org/10.1093/jee/toaa297.

2 ©The Author(s) 2021. Published by Oxford University Press on behalf of Entomological Society of America. All rights reserved. For permissions, please e-mail: journals.permissions@oup.com. Published and distributed under the terms of the Oxford University Press, Standard Journals Publication Model (https://academic.oup.com/journals/pages/open_access/funder_policies/chorus/standard_publication_model)

3 Learn more about Stenderup’s experience with mating disruption in Episode 2 of the Almond Journey Podcast: https://www.almonds.com/almond-industry/industry-news/episode-2-kent-stenderup-navel-orangeworm-mating-disruption