Top 5 Things to Consider at Hullsplit

Hullsplit is a time when growers’ various orchard practices – proper irrigation, nutrient management, pest control and orchard monitoring – come together in an effort to maximize almond quality and yield. To assist during this busy season, we’ve pulled together a list of the top five things you should consider before hullsplit. 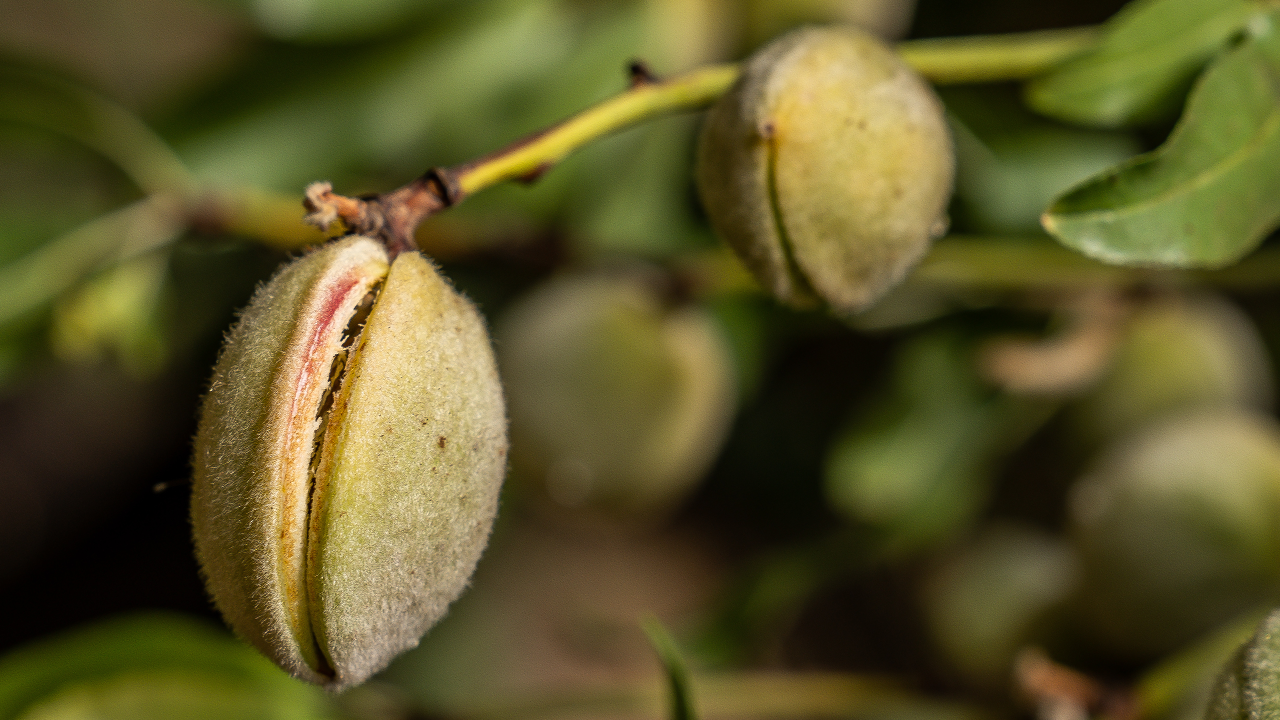 Proper detection is the first step in effectively managing the potential for myriad pest and rot issues that may occur following hullsplit.

The most effective time to spray for NOW is during its second flight, which often coincides with the initiation of hullsplit. As a confirmation that flight activity is coincident with the beginning of hullsplit, check to see that eggs are being laid on egg or pheromone traps (note: mating disruption may affect trapping). Then, when spraying, make your application no later than at 1% hullsplit. Find out more about mating disruption for NOW.

If your orchard experiences high NOW populations, a second insecticide application may be needed two-to-three weeks after the initiation of hullsplit, and a rotating of chemistries is advised to reduce resistance development pressure. As noted in the University of California (UC) Integrated Pest Management (IPM) guidelines, be sure to consider the following before conducting a second application:

As indicated in the UC IPM guidelines, Intrepid (methoxyfenozide) and Altacor (chlorantraniliprole), are preferred materials for hullsplit sprays. Pyrethriods have been used in the past, but their use should be considered with caution as NOW resistance to these materials has emerged, and pyrethriods are toxic to beneficials. If pyrethroids are used, they should be applied only be once per season. It’s imperative that you also make sure your sprayer(s) are well calibrated to improve spray efficacy and minimize drift.

3. Manage Hull Rot from Day One

Almond hulls are susceptible to several hull rot fungi from the beginning of hullsplit until the hulls dry, typically a month-long period of time. This period may vary, however, depending on fertilization and irrigation. Successful hull rot control is based upon effective strategic deficit irrigation and nitrogen management.

SDI, also known as regulated deficit irrigation or RDI, is the practice of mildly drought-stressing almond trees at hullsplit. By managing SDI, growers can reduce hull rot by 60–90% and experience a more uniform hullsplit and timely harvest. These factors may contribute to less crop damage from weather and late-season NOW flights, leading to less aflatoxin contamination, as well. What’s more, SDI reduces water use for 2-3 weeks without impacting crop productivity.

The target period of when growers should stress trees is from the start of hullsplit through 90% hullsplit, a period of about three weeks. The most accurate way to practice SDI is to use a pressure chamber to track and maintain slight tree water stress levels, between -14 bars and -18 bars, depending on the weather. Information about the pressure chamber is available on the UC Davis Fruit and Nut Research and Information webpage.

Growers who do not rely on pressure chambers, particularly those with a history of hull rot and a visual baseline from which plant stress can be observed, may achieve similar results by irrigating at 50% of normal tree demand, using crop evapotranspiration (ETc) calculations during hullsplit.

The onset of hullsplit will vary according to orchard conditions; stress levels vary with soil type and other factors. In shallow soils where trees may dry quickly, growers should initiate stress when blanks start to split, usually about a week before the onset of hullsplit. On deeper, well-drained soils, it can take up to 20-to-30 days to reach mild-to-moderate stress levels. In this case, growers may want to reference UC Agriculture and Natural Resources Publication 8515 to determine when to initiate water stress.

Almond Board-funded research has found that excessive nitrogen increases incidences of hull rot. It is critical that a proper nitrogen budgeting plan, which is a function of crop load, is in place for the growing season to ensure that only the necessary amount of nitrogen is applied. Growers should also follow their nitrogen budgeting plans throughout the whole season and update their plans as actual yields become more evident. Regular updating will also allow growers to focus their nitrogen applications to the key times of nitrogen demand in almonds: For instance, application(s) during kernel fill should typically occur the during end of May through early June.

You can find more information on nitrogen budgeting and management at Almonds.com/Nutrients.

4. If Applying AF36 Prevail, Aim for One-to-Two Weeks Before Hullsplit

Recently approved for use in almond orchards, the Aspergillus flavus biocontrol agent AF36 Prevail offers a supplementary approach to reducing aflatoxin contamination in the orchard.

If you plan to apply AF36 Prevail this season, plan to do so around early July and make the application on or close to the berms so that following irrigations can wet the Aspergillus-carrying seed. Learn more about AF36 Prevail and how it should be applied in this article from the Almond Board: “AF36, Biocontrol Agent for Aflatoxins, Now Approved for Almonds.”

Growers should keep in mind that a third-generation NOW flight poses one of the greatest threats to the orchard around harvest time, so almonds should be harvested as soon as possible. Timely harvest is when there is 95–100% hullsplit at eye level in the canopy and will avoid NOW infestations and subsequent aflatoxin contamination. Early-harvested varieties, such as Nonpareil, are much less likely to attract egg laying once they’re on the ground, reducing the risk to later harvest varieties remaining in the trees.

Click here to learn more about NOW control and management strategies. More details on SDI and other irrigation best practices may be found in the Almond Board’s Almond Irrigation Improvement Continuum. You can download a free copy of the Continuum at Almonds.com/Irrigation.