The Skinny on Almond Calories

In a nutshell, researchers expanded upon the traditional method used to determine calories by including measurement of the number of calories actually digested and absorbed from a food. In 2012, the researchers conducted their first study with whole roasted almonds, which showed that the almonds provided fewer calories than thought.[ii] This time, the research team broadened their investigation to examine the calorie availability of other almond forms, and also replicated the measurement of calories absorbed from whole roasted almonds.

The resulting data from this new study showed that, with the exception of almond butter, all of the almond forms analyzed provide fewer calories than is listed on packages: 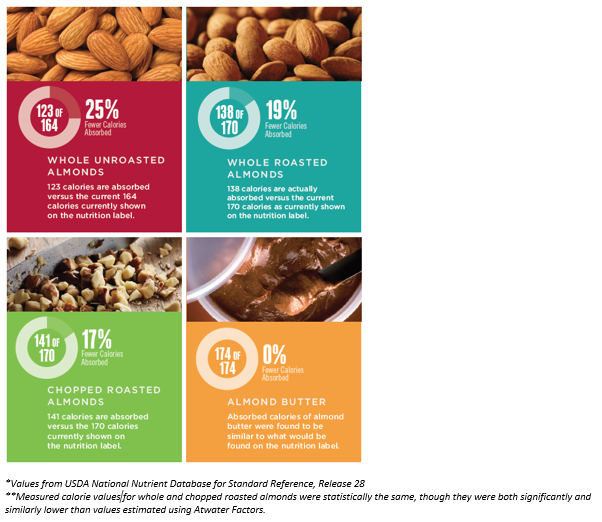 Wondering why the discrepancy in calories?  Mechanical processes, such as roasting, chopping and grinding play a role because they disrupt the cell wall of almonds and affect particle size. Particle size is also affected when almonds are chewed and digested in the body. The larger the particle size, the less the almond is broken down by digestive enzymes and the more of the almond is excreted, so fewer calories are absorbed. The reverse is also true: the smaller the particle size, the more calories are absorbed. Further research is needed to better understand the results of this study and how this method of measuring calories could potentially affect the calorie count of other foods.

According to researcher David Baer, PhD, whose lab conducted the study, “Calories are created equal but their availability from foods is not equal.  These new findings confirm that we actually get fewer calories than we thought from almonds­­, whether they are whole or chopped, roasted or unroasted, and the amount of calories absorbed is mostly dependent on the form of almonds consumed.”

This study on the calorie availability of almonds adds to a growing body of evidence showing that a simple snack of almonds can play an important role in weight management and keep your healthy habits on track.

With 6 grams of energizing protein and 4 grams of hunger-fighting fiber in every healthy one-ounce handful, plus good fats and essential nutrients like vitamin E and magnesium, almonds have always been a smart, satisfying snack. And now, providing fewer calories than originally thought, almonds are even a better choice to help manage weight and promote good health.

Study at a Glance:

The Study:  A study was conducted to determine the energy value of different forms of almonds and to compare the measured energy value with the value calculated from Atwater factors, the primary method used to determine the energy content of foods.  To calculate the measured energy value of almonds, eighteen healthy adults consumed one of five diets for 18 days each. The five treatments were administered to subjects in a crossover design where the diets contained 1 of 5 forms in a serving of 42 g of almonds each day: whole unroasted, whole roasted, chopped roasted, almond butter, and control (0g/day). After 9 days of adaptation to each diet, volunteers collected all urine and feces for 9 days, and samples of diets, urine, and feces were analyzed for macronutrient and energy contents. From this, the “measured” (metabolizable) energy content of the almonds was determined. Fracture force and fracture properties of whole and chopped almonds were measured.

Conclusion: Atwater factors overestimate the calories of whole (natural and roasted) and chopped almonds. The amount of calories absorbed from almonds is dependent on the form in which they are consumed.