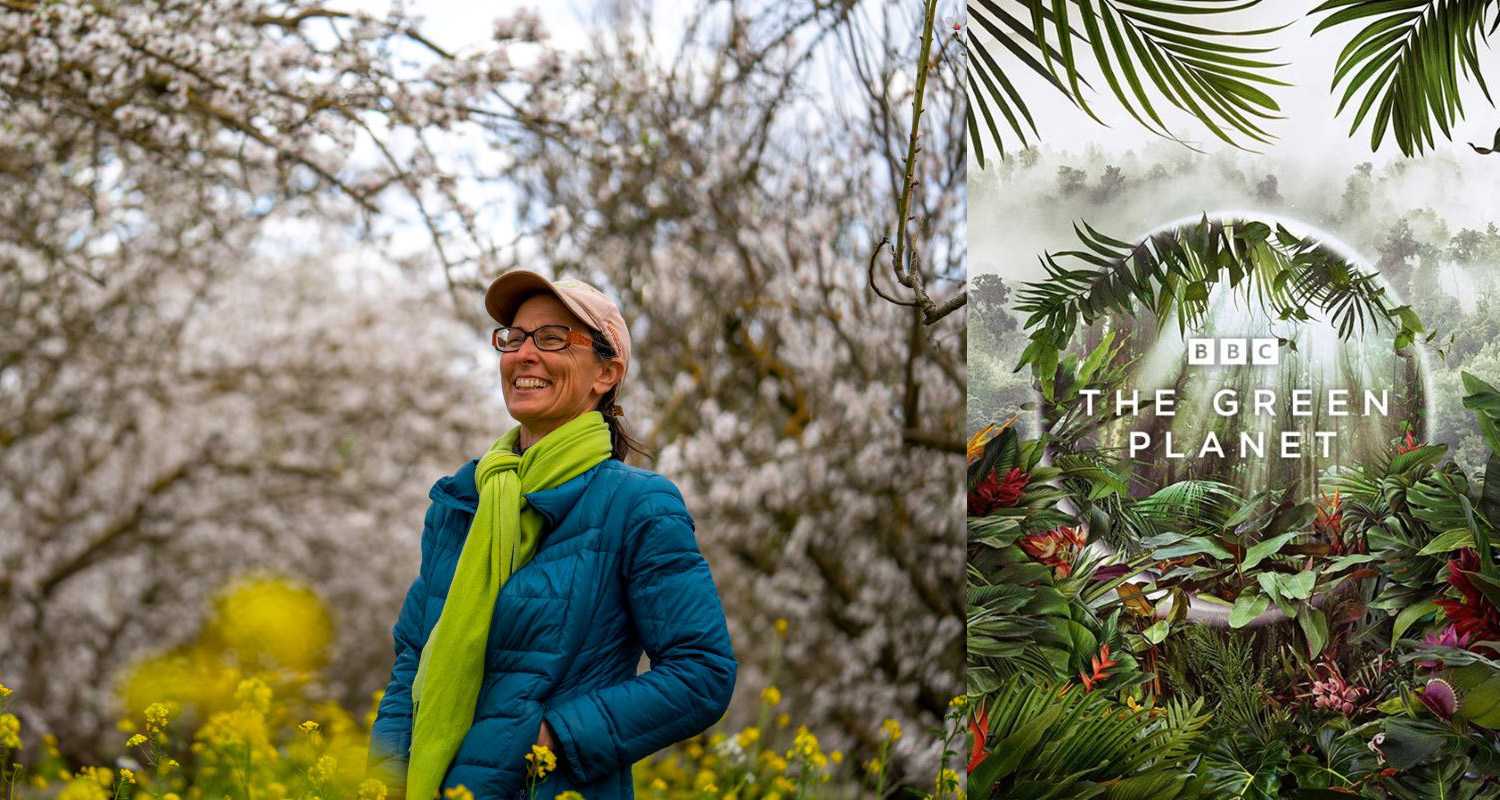 “The Green Planet” is a five-part, critically acclaimed documentary and part of the BBC Earth series. It looks at what narrator Sir David Attenborough calls the strange and wonderful world of plants. The production took the BBC Studios Natural History Unit three years to complete and was filmed in 27 countries. The fifth and final episode, Human Worlds, aired on August 6, 2022.

As part of that ambitious project, a three-person crew – two photographers and a producer/director – spent three weeks in California almond country in 2020. They visited the orchards and homes of Christine Gemperle, Brian Wahlbrink, Danielle Veenstra and Kiku Severson to film the wonder of bloom and pollination and to capture the character of almond orchards. These farms feature in the final episode of the series, airing on Wednesday, August 3.

When the Green Planet production crew first connected with second-generation farmer Christine Gemperle, they immediately fell for the beauty of her orchards during a spectacular bloom.

“2020 was the year of the Mega Bloom, with everything blooming close together,” Christine said. “There were so many blossoms on the trees, my cover crops looked awesome, and everything was visually perfect for their shots.”

The crew said the visuals came out even more spectacular than they expected. And they found something else they didn’t expect – Christine and her genuine, relatable way of describing her world.

“They said it was going to be about the plants and the bees, and that the farmer wouldn’t be part of the story,” she said. “They were really nice about it. But toward they end they decided to  interview me anyways in case they could use it for supplementary material, like an online bonus video.’”

They must have liked what they heard because, in the end, Christine is a prominent feature in the episode. During her segment, Christine brings to life an idea described by series host David Attenborough - “bringing a bit of wildness back.” Christine is one of many almond farmers who are growing blooming cover crops between their orchard tree rows to support honey bee health and provide habitat for pollinators. According to Christine, cover crops and pollinator habitat support “a better, more stable system.” 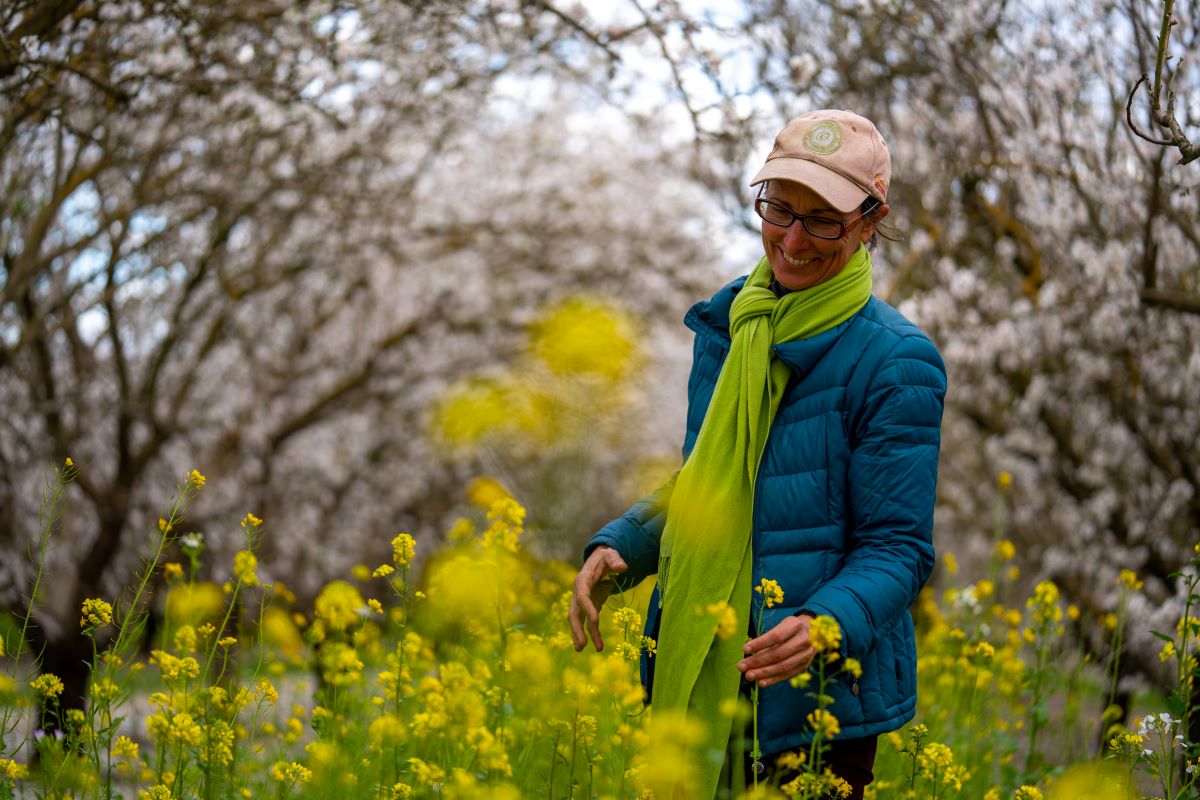 Working with the Green Planet crew
When they crew arrived in California to film “The Green Planet,” they were planned to focus on the bees and the almond trees, how they connected and how they depended on each other.

“What they wanted to see on the farm was how it worked with the bees coming in and pollinating, how the bees go back and forth between different varieties, how the cover crops worked in between, and what all of this provided for the bees,” Christine said. “They ended up wanting to know a lot more about farming.”

They asked Christine why she made so many of the decisions she makes each every day.

Christine said there is a long list of reasons why cover crops are valuable. “But it comes down to trying to find that balance in the orchard where you’re growing food. You’re doing it at a productive scale, but you’re also finding a place where you can fit into the ecosystem.”

About the farm
Christine and her brother Erich grow almonds on 135 acres on two ranches that make up Gemperle Orchards. “We have different skills sets,” she said. “Together we cover just about everything we need to run the farm. “We really respect each other and get along great. It’s really special to be farming with your brother.”

Christine lives on the orchard in Ceres, the near geographic middle of California. Her father was an almond farmer in the early 70s, and when Christine and Erich were kids, they followed their father through the orchards watching him work.

Christine studied biology at UC Santa Cruz, and earned a master’s degree in fisheries biology from Utah State University, but the call of farming and the family legacy was strong. She returned to the Central Valley work with Erich, and they bought their land to farm in 1998. 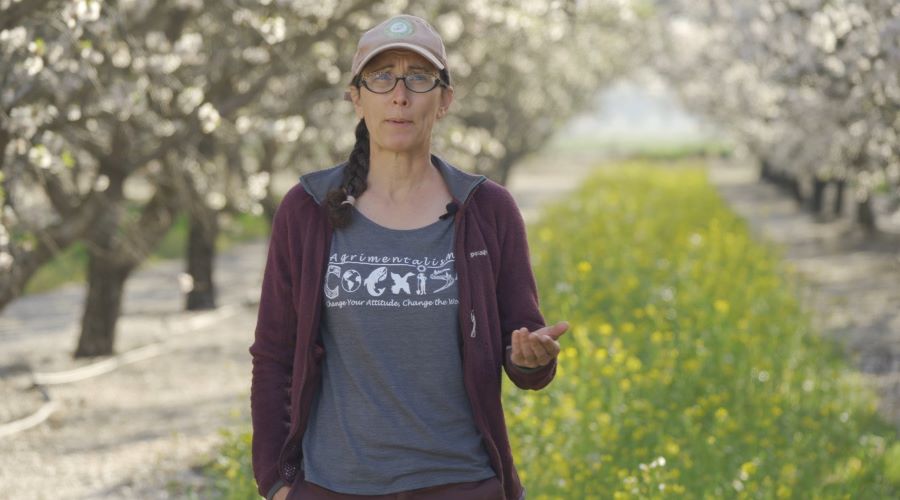 Lasting impressions
“My favorite part is that they came to my property and were taken aback by the beauty of it,” Christine said. “People come onto the farm and realize it isn’t what they envisioned. They say things like, ‘This is a family run operation… it’s this lush, beautiful, diverse environment… it’s very wholesome and holistic. These are good people doing the best they can to do the right thing.’”

She said she would be thrilled if “The Green Planet” helps others see farming the way the BBC crew did.

“My hope is that people start to look at agriculture in general as something that they can trust and respect, and that gives back,” Christine said. “We want people to understand that farming is not easy and that we’re always learning and moving forward in the way that we best know how at that given moment.”

She said it both thrilling and humbling to be a part of “The Green Planet” and its message of the connectedness of life on Earth.

“It’s such an honor to have been in a series that actually educates people all over the world so much about the planet they live on,” Christine said. “If I can be a part of that education and teach about my small corner of the planet and what we do, that’s really meaningful.”