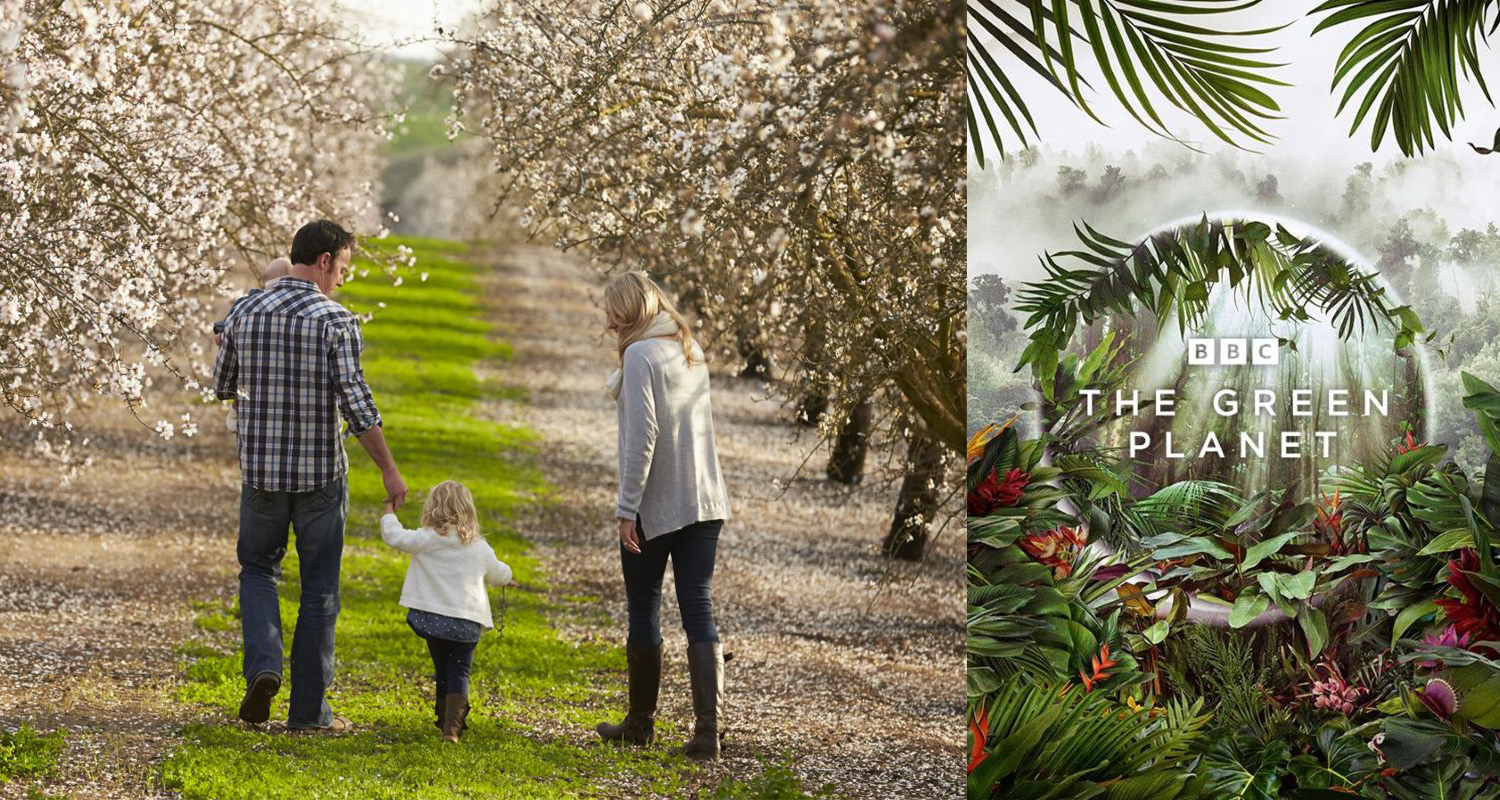 “The Green Planet” is a five-part, critically acclaimed documentary and part of the BBC Earth series. It looks at what narrator Sir David Attenborough calls the strange and wonderful world of plants. The production took the BBC Studios Natural History Unit three years to complete and was filmed in 27 countries. It airs weekly on PBS starting Wednesday, July 6.

As part of that ambitious project, a three-person crew – two photographers and a producer/director – spent three weeks in California almond country in 2020. They visited the orchards and homes of Christine Gemperle, Brian Wahlbrink, Danielle Veenstra and Kiku Severson to film the wonder of bloom and pollination and to capture the character of almond orchards. These farms feature in the final episode of the series, airing on Wednesday, August 3.

Almond farmer Brian Wahlbrink is a long-time fan of BBC’s Planet Earth and Blue Planet documentaries, so he was thrilled to host the Green Planet production crew at his family’s ranch, Sperry Farms.

But even as a fan, he was surprised and impressed by the planning and careful thought that goes into documentary storytelling for a global audience.

“I’ve watched the behind-the-scenes videos from the making of Planet Earth, but to see it up close is something special – they’re drawing things out on a white board, and they’re planning out a strategy behind the imagery,” he said. “Then they’ll shoot something and get a ton of images and go back to the drawing board and start again. They’re constantly evaluating themselves and putting the time into it.”

Brian said that same approach – without the white boards – is how his team and many almond growers farm. We’re constantly evaluating and adapting to use our resources more efficiently and more effectively and to be better and better growers.”

“We’re doing some cutting-edge things as far as farming practices go,” he said. “We may not have a global audience watching us, but almond growers do feed a global market, and every detail of what we do matters, too. On the other hand, the BBC crew shoots way better images than I ever will.” 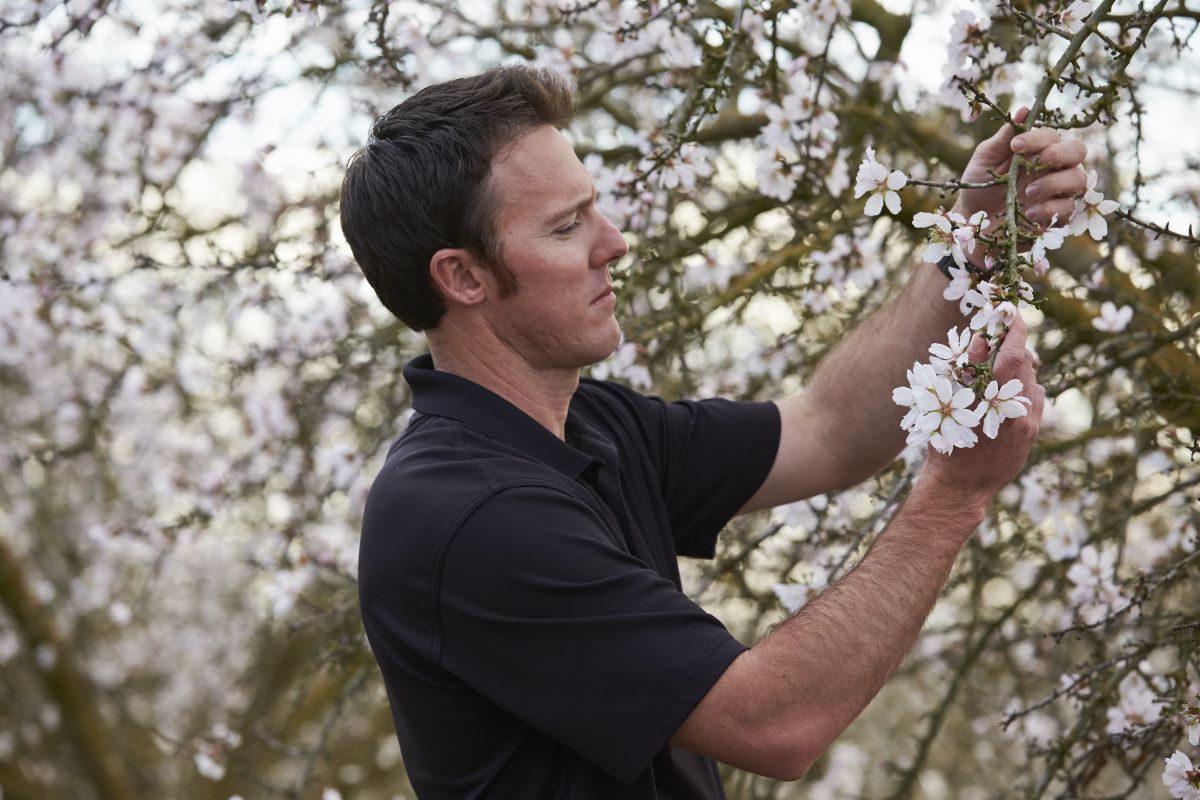 Along with the attention to detail of their video, the crew asked for details on everything from the viability of the flowers and pollen to how it all comes together with honey bees connecting the dots.

“We were able to have some higher-level discussions and then turn around and see the bees work firsthand. It was a pretty special moment for them because got to not only capture it in the high-res film, but they got to learn a lot while they were out there,” Brian said.

And the efforts that went into the shots was something Brian did not expect.

“They’re so dedicated to high quality imagery, telling the story and really getting the job done right. Some of the cameras and equipment that was brought out were things I’ve never seen before,” he said. “They had the most extensive lens systems, drones and close-ups, so I was getting the full behind-the-scenes tour of the equipment.”

The crew started in the early morning and worked through sunset to set up and capture shots in the orchard. But not every shot made the cut. According to the crew, for every 400 minutes that they filmed, approximately 1 minute would make it into the episode.

“It was pretty incredible interacting with them,” Brian said. “They’re extremely nice people and wanted to learn about what we were doing, even just for their own knowledge. We had some really great conversations and, while we were always nearby if they needed something, we eventually turned them loose on our farm for whatever shots they wanted.”

About the farm
Sperry Farms is a fifth-generation family-owned-and-operated farm that has grown over the years and now spans approximately 2,000 acres. Located in the northern San Joaquin Valley, the ranch sits in the Sierra Nevada foothills and boasts views of Yosemite Valley on clear days.

Though Brian describes himself as “the Southern California transplant,” having married into the almond industry in 2005, he’s worked with his brother-in-law Wes for more than a decade on the farm’s health and productivity, adopting new farming practices and technologies.

“We’re doing some cutting-edge things as far as farming practices go, and the location is beautiful,” he said. “We’re about 45 minutes into the rolling hills. We have giant 300-plus-year-old oak trees on the ranch and we sit above the Stanislaus River. We are so lucky to be on this land and to serve as stewards of it for future generations.” 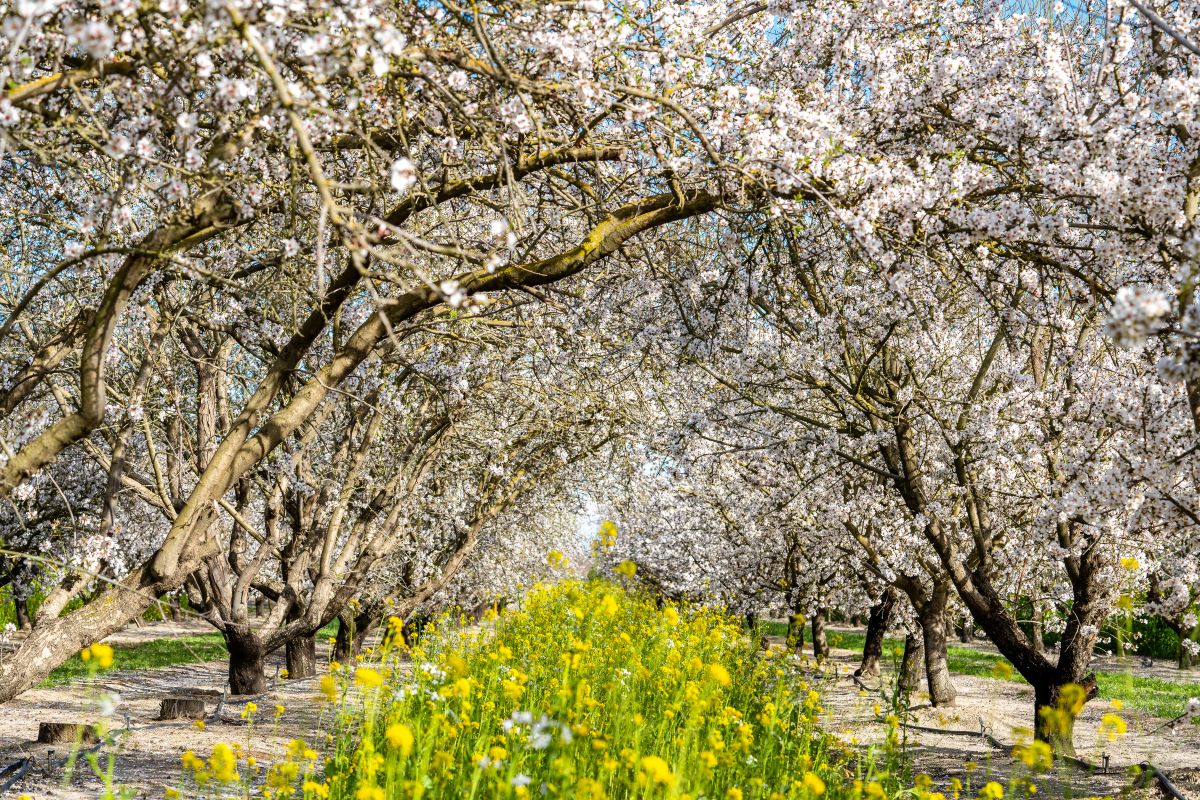 Lasting impressions
The series aired in the U.K earlier this year, so Brian unexpectedly got a sneak peek on a flight from Dubai to the U.S.

“There were about 10 people from the almond industry on the flight and I was walking around telling everyone, ‘There’s our ranch!’” he said. “Hearing David Attenborough’s voice while looking at our ranch was the coolest thing.”

Brian hopes viewers and other farmers are inspired by the story, which he says outlines the pressures agriculture faces and the transition to a new era of farming.

“I thought they did a nice job of highlighting almonds,” he said. “All together they told a very holistic story about what we do here in California, and about some of the challenges and opportunities we face.”

Brian said he was also impressed by the comprehensive and smart look at agriculture in the series.

“There are some really interesting comparisons between what farmers, foresters and other land managers are doing in different sectors and how we’re all facing different and difficult challenges,” Brian said. “If everybody can watch the entire series and learn a few things, then we all win..”