Several key nutrients found in almonds are linked to skin health, which makes almonds the most nutritious beauty secret out there.

Almond nutrients prove their beauty value and now two pieces of breaking research investigate how almonds may protect and restore our skin. Read more in our Research Update below.

RECIPE: Almonds on the Inside and Outside

As a versatile snack, almonds can’t be beat with 6 grams of energizing protein and 4 grams of filling fiber per one ounce. This month, here’s something to put near your mouth, not in it! Try combining almond oil with smashed avocado and honey for a beauty boost. 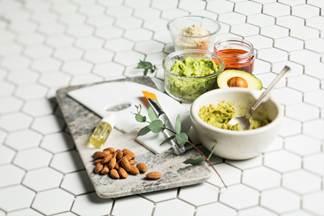 Sample Post:  Want a lift to tired winter skin?  Head to your kitchen for all you need to make a DIY face mask! Almond oil, honey and avocado nourishes and soothes your skin. Hooray for skin food tips and #almond snacks!

When it comes to natural beauty, almonds fit right in. Two new research studies, both funded by the Almond Board of California, show that almonds may benefit skin in several unique ways.

A new study by researchers at the University of California, Davis found that eating almonds daily in place of typical calorie-matched snacks improved measures of both wrinkle severity and skin pigmentation in postmenopausal women.1

In this 6-month randomized controlled trial, 49 healthy postmenopausal women with Fitzpatrick skin type 1 or 2 (the skin types most susceptible to sunburn) completed the study. Participants were randomly assigned to one of two groups: in the intervention group, women ate almonds as a snack, which accounted for 20% of their total daily calorie intake, or 340 calories per day on average (about two 30 g servings).  The control group ate a calorie-matched snack that also accounted for 20% of calories: a fig bar, granola bar or pretzels. Aside from these snacks, study participants ate their regular diets and did not eat any nuts or nut-containing products.

Skin assessments were made throughout the study until the end point (24 weeks). At each of these visits, facial wrinkles and facial pigment intensity were assessed using high-resolution facial imaging and validated 3-D facial modeling and measurement. Skin hydration, transepidermal water loss (TEWL) and sebum excretion were also assessed.

Researchers found a statistically significant reduction in wrinkle severity and improvement in overall skin pigmentation- which may be referred to as more even skin tone -  in the group consuming almonds. At the 6-month mark, wrinkle severity decreased by 16% and overall pigment intensity decreased by 20%. Further, body weight remained constant for both the almond group and the control group from baseline to 24 weeks.

Since this study was limited to 24 weeks, results do not provide insight into longer duration and effects of eating almonds. Additionally, the study participants were postmenopausal women with sun sensitive skin types Fitzpatrick I and II, so results cannot be generalized to younger, male or higher Fitzpatrick skin type populations. And, although the snacks in both groups were calorie-matched, they were not macronutrient-matched. You can read the full study here.

In another innovative study, researchers at UCLA investigated whether daily almond intake could increase resistance to UVB light (the main source of skin damage from sun exposure) and improve skin texture.2 The participants in the study were young women who self-identified as Asian, ages 18-45 years, with skin types that ranged from “burns and does not tan easily” to “burns a little and tans easily,” technically classified as Fitzpatrick skin types II, III or IV. The women were randomly assigned to eat 1.5 ounces (42 grams, 246 calories) of almonds or 1.8 ounces (51 grams, 200 calories) of pretzels daily for 12 weeks. Data from 29 participants was analyzed at the completion of the study.

UVB resistance was measured by quantifying the minimal erythema dose (MED) for each study participant at the beginning and end of the study. MED is the lowest dose of UVB light needed to cause slight skin reddening or erythema to a specific site on the skin. (In this case, inner-arm skin was chosen because it has little exposure to the sun.) Erythema is the first indication of skin photodamage, so increased MED indicates improved protection against (or resistance to) UVB photodamage.

At the beginning of the study, there were no differences in MED between groups. After the 12-week intervention, there was an increase in both MED (~20%) and exposure time to reach minimal erythema for women in the almond group compared to the pretzel group. No statistically significant changes in MED or exposure time were observed in the pretzel group. Secondary outcomes investigated in the study included measures of skin texture, sebum and hydration, and no significant differences were seen in these measures between the groups.

Limitations of the study include a smaller study population than planned due to the exclusion of those participants found to be UVB resistant at the dose and exposure time selected. This study did not investigate the effect of sunlight exposure in general nor UVA exposure; findings are limited to protection against UVB radiation. This study also investigated a younger population. Further research is needed to investigate the effects of almond consumption for older subjects with moderate-to-severe photoaged skin and for other skin types/ethnicities.  You can read the full study here.

Join us for our first-ever virtual experience of California’s almond orchards, May 18-19, 2021! This free two-day event will bring you the latest information from the Almond Board of California on sustainability programs, responsible almond farming practices and how almonds provide best-in-class nutrition appeal. A conference agenda will be released closer to the event - 7.5 hours CPE have been applied for through CDR. Register for the tour here.