Start the Year Right with the Help of Almonds

Celebrate the New Year with Almonds!

For many people, the New Year marks the start of a new era, and with that, hails an opportunity to refresh and start again. New Year, New Me. Although self-improvement can happen year-round, January traditionally inspires clients to take stock of their wellness goals, which often includes health and dietary goals. According to Statista's Global Consumer Survey1, exercising more, eating healthier, and weight loss were the top 3 most popular New Year’s Resolutions for 2022. As clients turn to you as trusted advisors for guidance on kickstarting their health resolutions, let them know that almonds make the perfect satiating snack to help them stay on track. If they have a sweet tooth, they can enjoy some tasty chocolate-covered almonds, while almond trail mix is there for those with savory cravings, without compromising healthy eating goals.

While this can be a time when clients rush to make complete dietary overhauls, as health professionals, you know it’s small changes that have big impacts on overall wellness. It’s the small swaps that stick and help us become healthier and happier, all year long. So when clients come to you for help on making small but effective changes in snacking, suggest a handful of almonds as a delicious and nutritious alternative.

Store-bought snack packs may have a lot of added sugars and salt. Instead, help clients make their own delicious Rosemary Salted Caramelized almonds. The best part? Not only are they tasty, but clients will know exactly what’s in them. 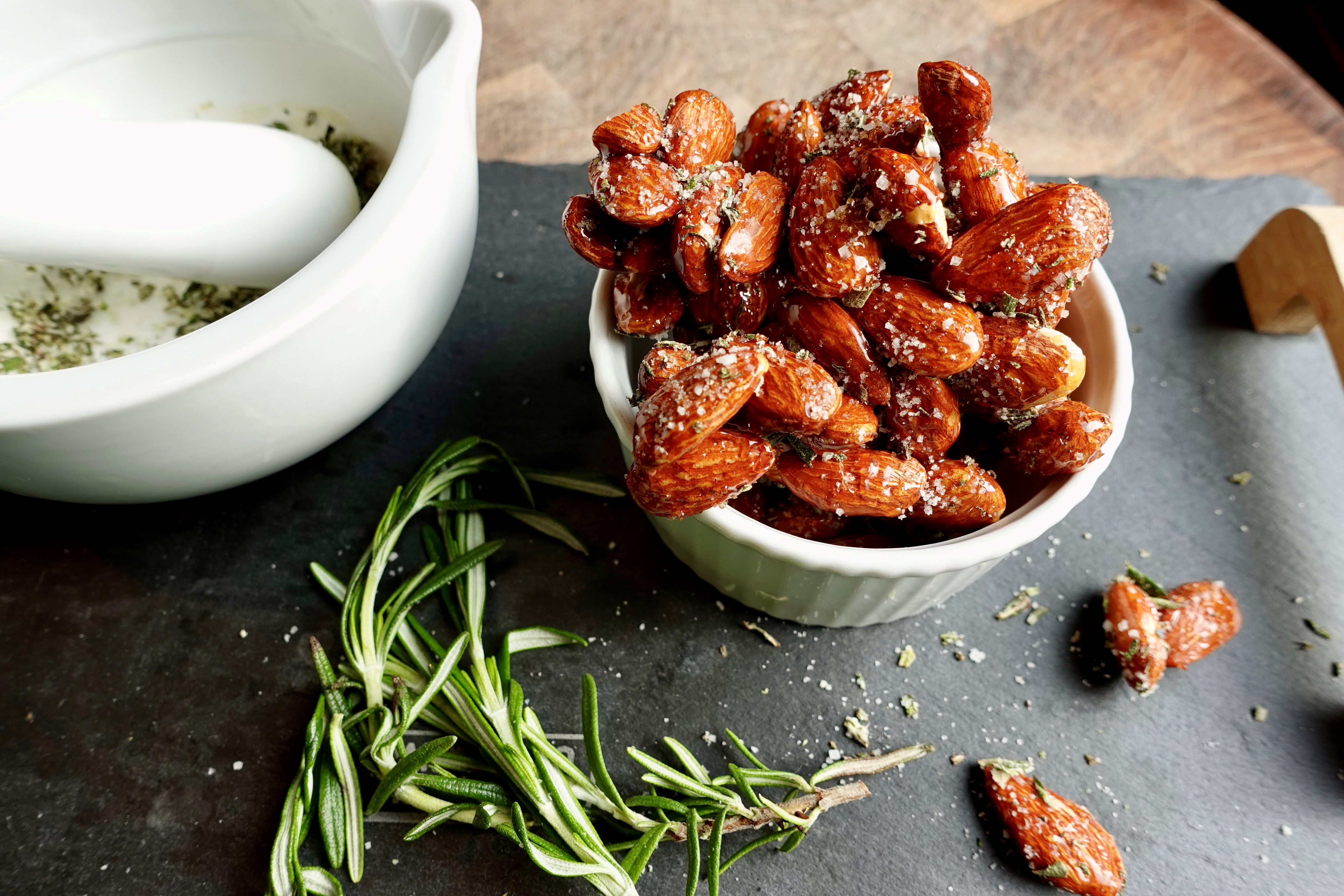 Jumpstart your New Year’s health goals with these delicious Rosemary Salted Caramelized Almonds! They make for the perfect snack, at home or on-the-go, and can be easily prepared the night before.

A recent study2, funded by the Almond Board of California, showed almond consumption in adults increased butyrate, a specific microbiota byproduct connected with several health benefits, including improving sleep quality, fighting inflammation, improving stool output, and has been associated with a lower risk of colon cancer. In this trial, 87 healthy adults participated, aged 18 to 45 years, who described themselves as regular snackers enjoying two or more snacks daily. Participants were consuming a typical diet that was lower in fiber than recommended and screened extensively for exclusion criteria.

Limitations of the study include the sex distribution of volunteers, where more than 86% were female, as well as the age of participants, as the average age was 27.5 years. The researchers recognize their findings are not necessarily generalizable to males or to older populations.

In summary, Professor Whelan and his colleagues found that study participants who consumed almonds experienced significant increases in butyrate as well as increased stool frequency. Almonds were well tolerated and did not lead to gastrointestinal symptoms, which indicates almond consumption may be a way to increase fiber without causing any adverse effects. This is suggestive of positive alterations to microbiota functionality.

ALMONDs + RDNs in the News

Choosing wisely when late-night cravings hit is key to a satiating bedtime snack without sacrificing your health goals. Registered Dietitian and blogger, Abbey Sharp, shared her favorite sleep-supporting balanced bedtime snack, oatmeal topped with almond butter for a delicious touch of flavor and nutrition. Check out the full recipe here!

In addition to being a blogger, Dietitian Abbey Sharp is a food writer, TV and radio personality, new mom, and the founder of Abbey’s Kitchen Inc. Abbey’s core philosophy is that a pleasurable relationship with food, your body and yourself is the fundamental secret to good health. Keep up with Abbey on Instagram or check out her blog.