The Almond Conference (TAC) is the premier almond industry event, drawing members of the almond community from across the globe. This year, given current restrictions on large gatherings in California and ongoing uncertainty due to the COVID-19 pandemic, the Almond Board of California (ABC) hosted the first-ever virtual Almond Conference. As ABC President and CEO Richard Waycott said before the event, “Going virtual will ensure we are able to gather with our friends and colleagues from around the world in a truly global event.” And the Conference delivered on that goal, hosting attendees from across the world, from India to Iran, Australia to Europe, and the East coast to our very own Central Valley.

From General Sessions featuring big names in U.S. trade, agriculture and policy to the science behind almonds and skin health, The Almond Conference 2020 had it all! Throughout the week of the Conference, 3,000 people attended and engaged in sessions, visited the trade show and networked with fellow industry members. The Almond Board thanks all who helped make this year’s Conference a success.

Check out highlights from this year’s Conference and be sure to mark your calendar for next year’s event, scheduled for December 7-9, 2021, at the Sacramento Convention Center!

Waycott, joined by ABC Chair Kent Stenderup and Vice Chair Brian Wahlbrink, kicked off this year’s Conference with the annual State of the Industry address. During the address, Waycott, Stenderup and Wahlbrink discussed the current state and outlook for the California almond industry, including the challenge of marketing the 3 billion pound crop and how the Almond Board is investing in building demand and protecting the reputation of California almonds and almond growers around the globe.

You can view a recording of the address here on ABC’s “The Almond Conference 2020” YouTube playlist. 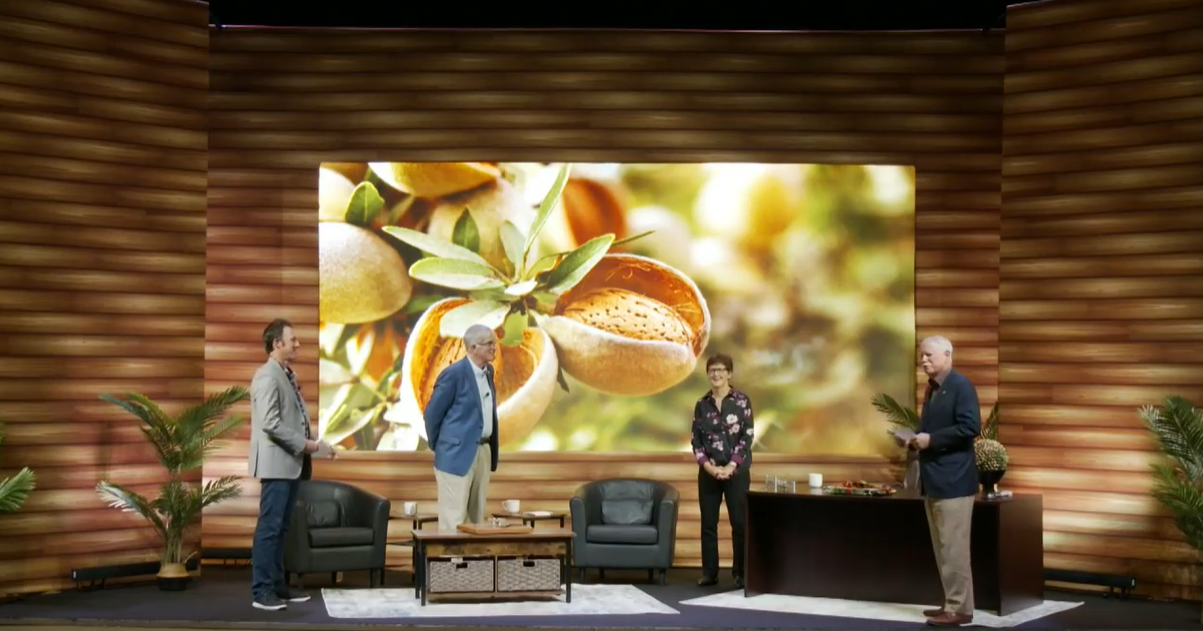 When Dr. Karen Lapsley arrived at the Almond Board in 1999, there were two published research papers on the benefits of almond consumption. Today, there are 185 and counting. Lapsley, who retired in July 2020, has remained an advising consultant for the Almond Board and was recognized during the State of the Industry address by Stenderup as the “matriarch of nut nutrition” who helped lead the charge to establish California almonds’ health halo worldwide. Thank you, Karen, for your service to the industry and invaluable contributions! 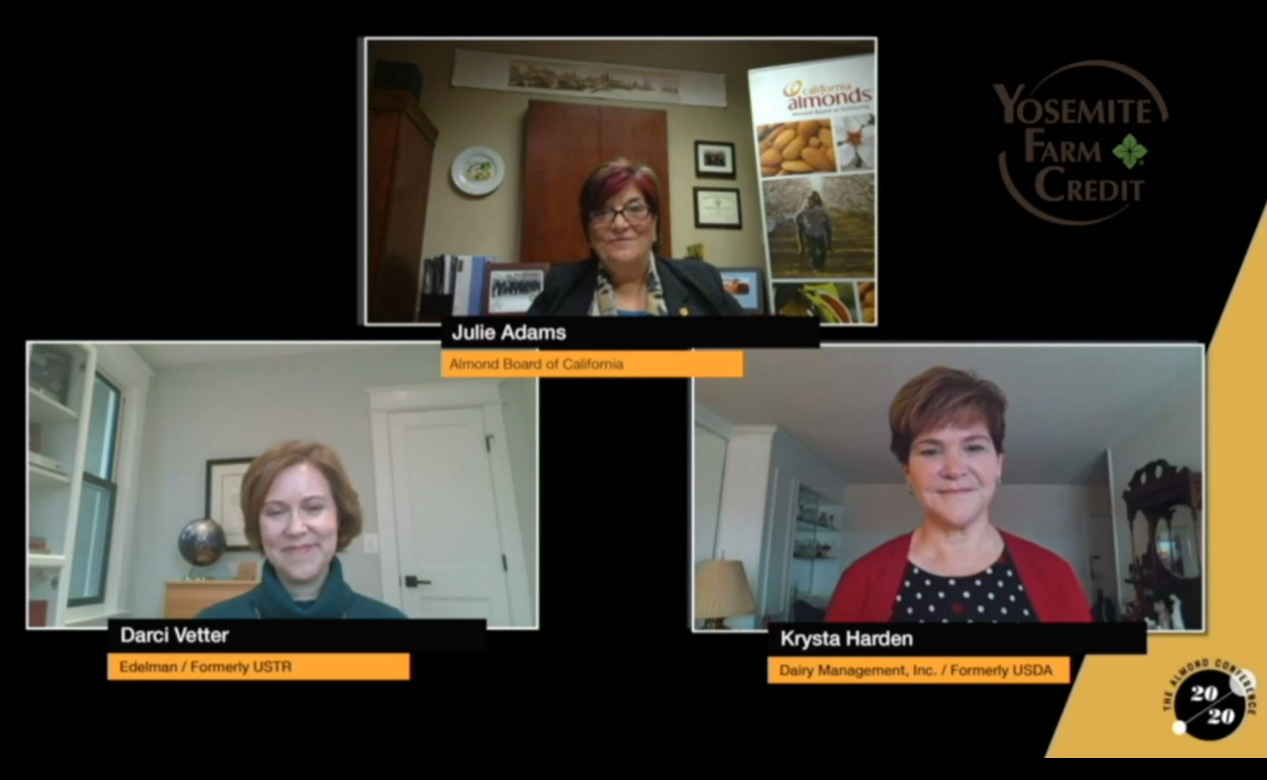 During the Wednesday morning General Session, former U.S. Trade Representative Darci Vetter and former USDA Deputy Secretary Krysta Harden joined ABC’s Julie Adams to discuss how events happening around the world today will impact American agriculture and the California almond industry for years to come. "No one can produce more than U.S. farmers, but having the best product is not enough. You have to be accountable. …Some farmers don’t want to have these conversations, but if they don’t, they may not be farming in a decade,” noted Harden. 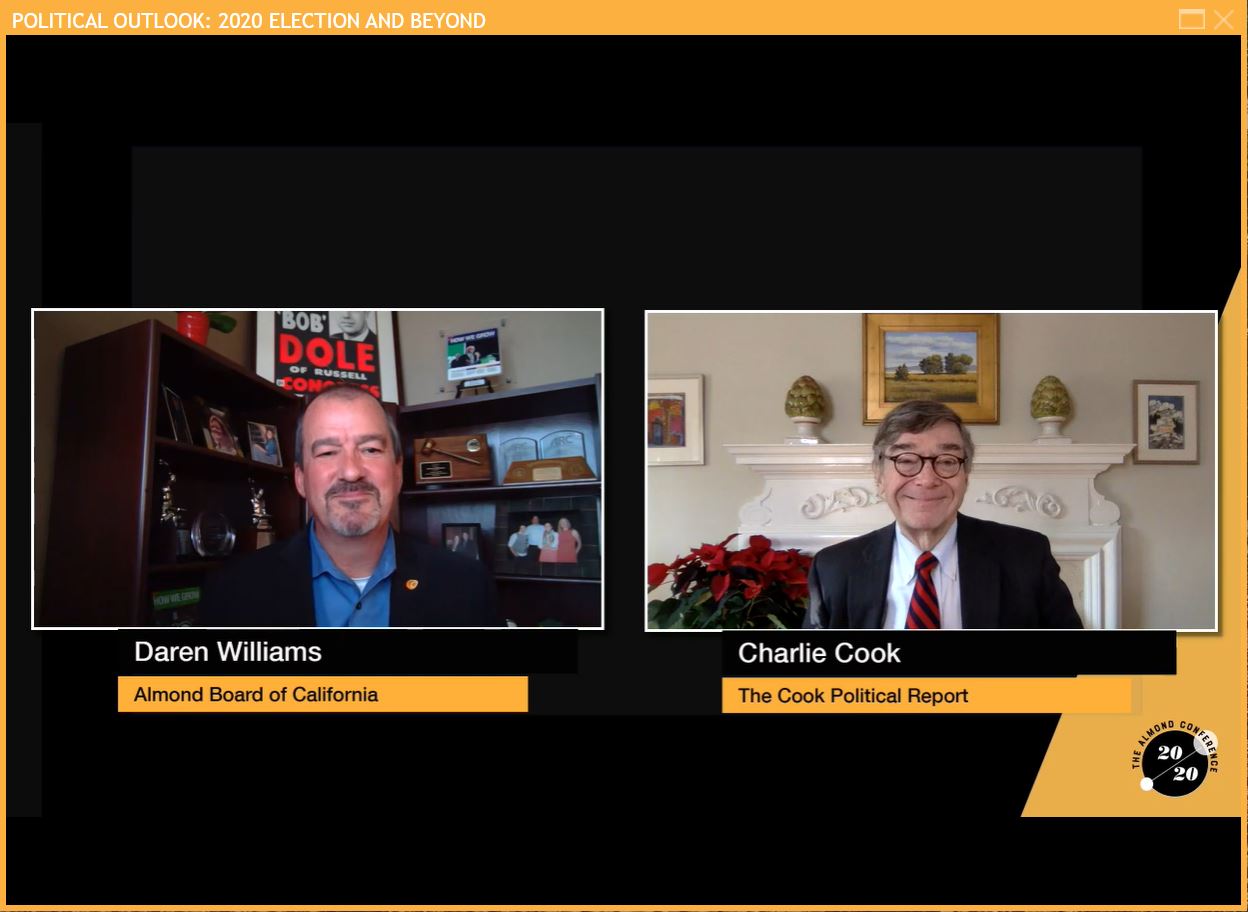 Charlie Cook, one of most sought-after pundits in American politics, kicked off the final day of The Almond Conference with an overview of the 2020 election as well as implications for the American political landscape, the nation’s growing partisan divide, and a realistic look at the impacts of a Biden administration on U.S. agriculture. As editor and publisher of The Cook Political Report and political analyst for the National Journal Group, Cook's non-partisan viewpoint on the outcome of the 2020 election is in high demand, but the virtual setting allowed him to join live from his own living room in the Nation’s Capital. 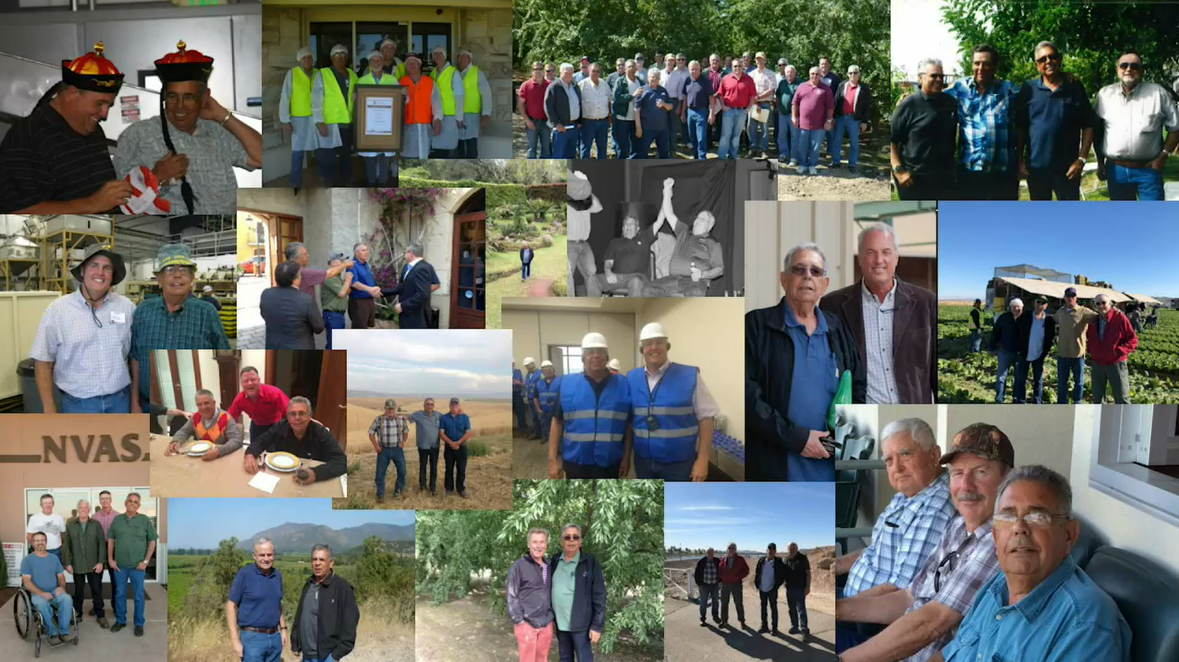 Since 2011, the Almond Board has awarded one outstanding member of the California almond industry with the Almond Achievement Award. This year, during the State of the Industry address, Waycott, Stenderup and Wahlbrink announced Jim Paiva of Riverwest Processing, Inc. as the winner of the 2020 award. Paiva planted his first almond trees in 1970 in Lost Hills and had been involved in all facets of the industry, including processing and farm management, up until his passing on November 20, 2020. The Almond Board of California is proud to recognize Paiva’s years of service and dedication to the California almond industry and sends its sincerest condolences to the Paiva family in Jim’s passing.

Final session recordings and presentation slides will be made available at Almonds.com/Conference next week.