Earlier this year, representatives from the Almond Board of California (ABC) attended one of the world’s premier food conferences in Chicago. It was a prime opportunity to connect with key players from international food companies, remind them why almonds remain a healthy and delicious ingredient in many products and share some inspirational recipes with an influential audience.

The event is called IFT FIRST and it is the world’s largest food trade expo. It’s put on by the Institute of Food Technologists in Chicago in mid-July. Because of the pandemic, this was the first time since 2019 it took place in person.

Charice Grace, ABC’s Trade Marketing and Stewardship Manager, was part of the Almond Board’s delegation. She said the ability to talk face-to-face with so many people – including food writers from all over the world -- was invaluable.

“We had the opportunity to meet with a lot of top-tier food industry media and received some positive news articles highlighting how almonds could be used,” Grace said. “We provided them with a lot of information and recipe cards at the booth as well as highlighted almonds’ nutritional benefits and popularity among global consumers. It was a joy to see them in person again after three years.”

One of the best decisions the Almond Board team made was to include a culinary consultant – Chef Henry Hill of Hill’s Research Kitchen – as part of the ABC booth.

“He’s a cool millennial chef and he showcased some next-level uses for almonds and demonstrated how ingredients like almond butter, almond milk, whole almonds and even defatted almond flour can be used in unique snack concepts,” Grace said.

Among the favorite items created by Hill was a whipped mocha almond boba beverage, which was a hit with conference attendees. It includes almond butter and almond milk, which are whipped together with cold brew coffee and almond flour boba to create a dairy-free mocha beverage that appeals to Millennial and Gen Z tastes. 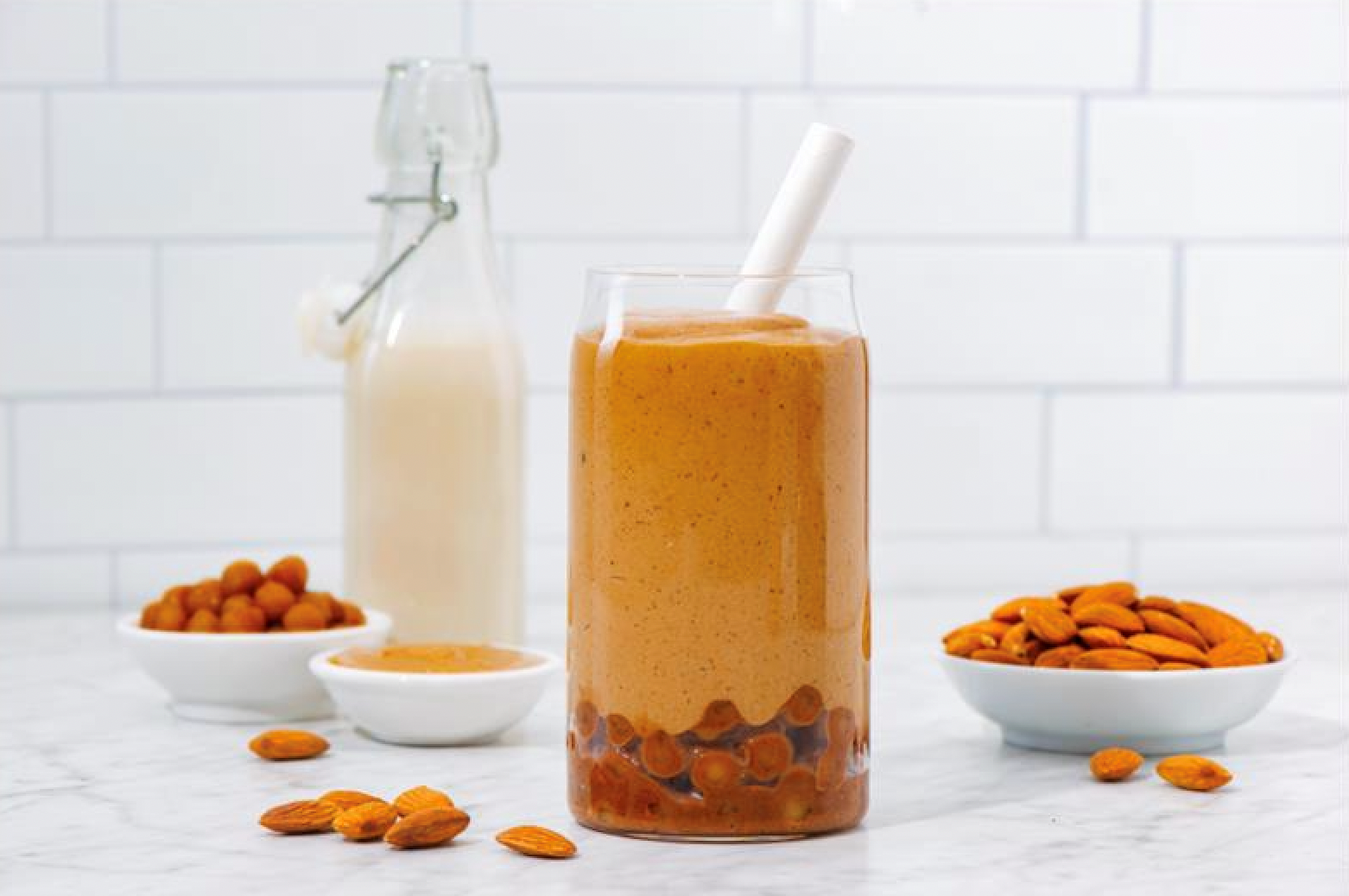 “The day we sampled that item, we gave away 750 samples in one day,” Grace said. “So that was quite the delight. People came back other days asking for more of that sample.”

Hill also prepared spicy almond crunch puffs, a modern take on the grab-and-go snack that features almonds coated with jalapeno seasoning, as well as a chocolate almond butter rocky rope, which appeals to consumers who prefer chocolate products with almond butter. All three recipes featured at the event can be viewed here. 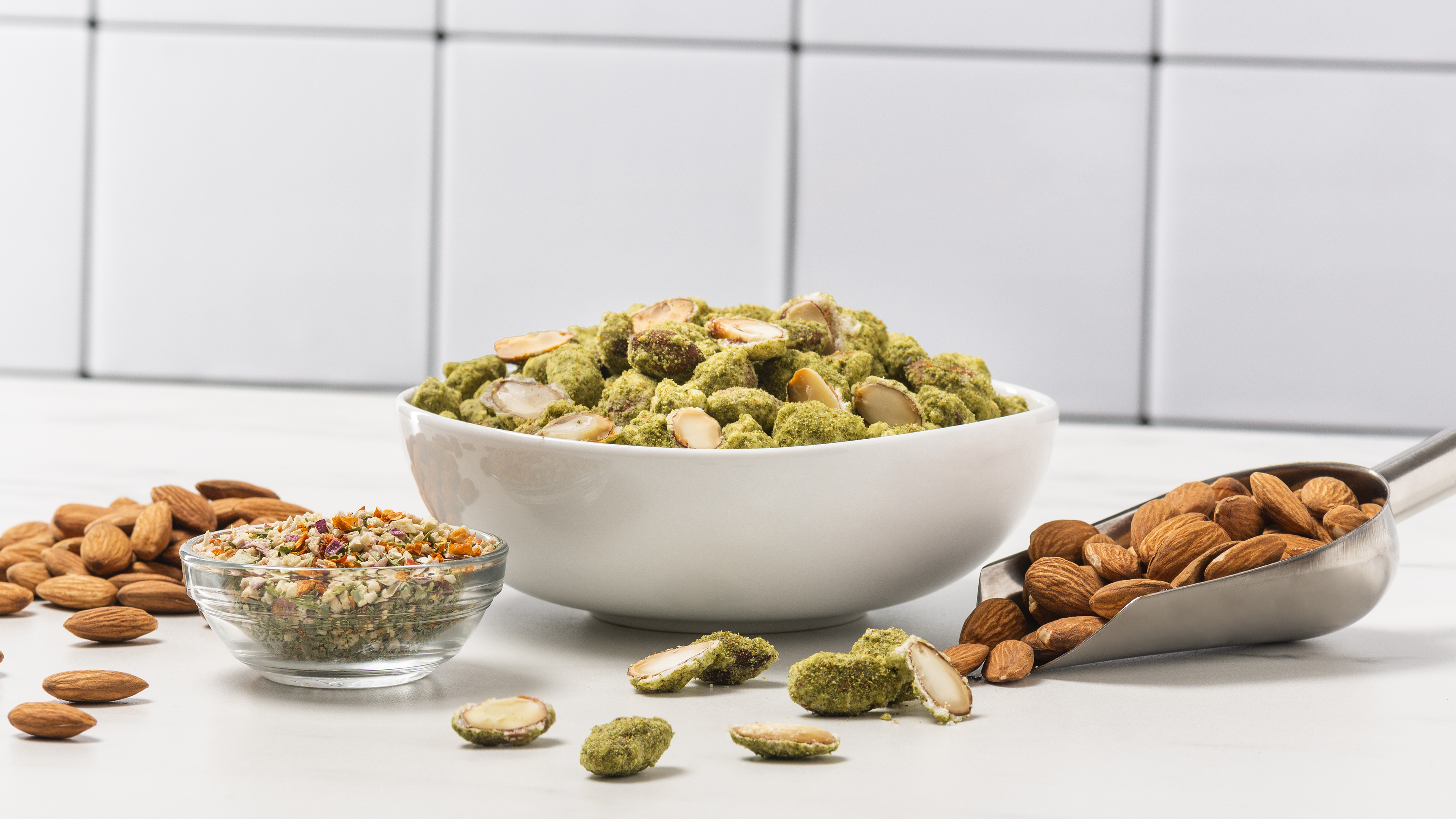 A savory and crispy bite that brings the heat, coated with jalapeno seasonings and salt, for a modern take on the grab-and-go snack.

Providing real samples of unique and tasty almond-inspired combinations, Grace explained, is an effective way to reach people who are trying to respond to changing consumer appetites.

“We found that sharing samples for visitors to taste sparked conversations about the challenges and the needs of today’s food manufacturers, and it really allows ABC to highlight how almonds can be the solution,” she said. “And that’s the purpose for us being there. How can we be a solution along that product development journey?”

The overall takeaway for food product developers, she hopes, is that almonds have something to offer in many ways, which is why they remain the No. 1 nut used in global new products, in categories such as bakery bars, dairy and cereal.

“This healthy halo and the versatility of taste and texture separates an almond from other nuts and ingredients,” Grace said. “It’s healthful and lends itself to a wide range of product categories, from snack mixes and bars to alternative milks and cheese to frozen desserts, baked goods and chocolate items.… Almonds provide that crunchy texture that consumers and manufacturers are looking for.”